“The Manchurian Candidate” Yet Another Minnesota Opera Triumph 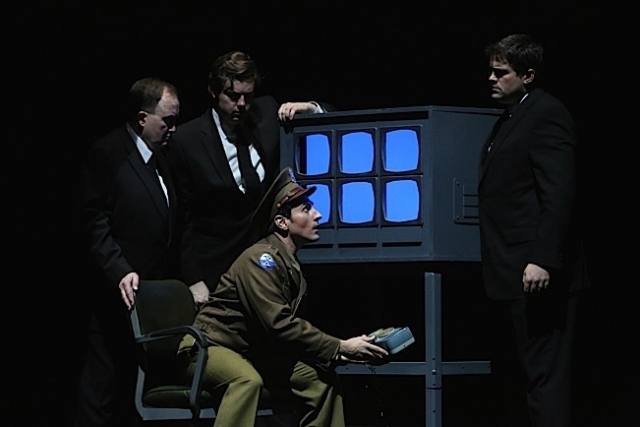 Librettist Mark Campbell has adapted Richard Condon’s emblematic 1959 Cold War thriller with a spare thoroughness that clips along through a rather complex epic storyline. So you won’t find this to be an opera laden with gravitas scene after scene with occasional breaks in between the heaviness as is often the case with opera, though it certainly has that it in it. It’s like music drama that consciously engages an audience with varied pace and timing. But it’s still an opera.

The Manchurian Candidate begins with five American platoon members who are POWs during the Truman-era Korean War. They witness fellow officer and protagonist, Sergeant Raymond Shaw kill two of their fellow soldiers at the hypnotizing behest of their Soviet and Chinese captors. These troops have been brainwashed to think they are attending a New Jersey ladies garden party and that Shaw is actually a great American hero who valiantly saved the day in Korea. That they’ve seen him kill fellow soldiers has been sublimated deep into their subconsciouses.

Their communist puppeteers know how easy it is to get gullible McCarthy Era Americans ginned up with reactionary patriotic rhetoric and promiscuous fear of bogeymen. This will serve their intentions perfectly as they have programmed Shaw to assassinate the Republican presidential candidate when he returns stateside and therefore,  “shock and awe” the American public and government. 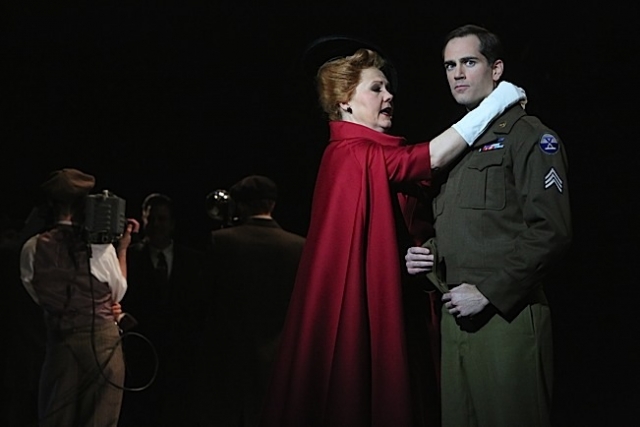 Shaw is the ideal candidate (as the assassin, that is) because his communist spy mother, Eleanor, has remarried John Iselin, a McCarthyistic Republican Senator, who we could compare today in presentation to a Mike Huckabee or a Sam Brownback. Such extremists probably could not win the Presidential nomination, but could pressure moderates to put one of their ilk on the ticket in order to appease their paranoid ultra-right voting bloc.

To expect The Manchurian Candidate to captivate audiences in the same way the novel and film did at the cusp of the Eisenhower and Kennedy administrations is not fair. Surveillance is now beyond anything then imaginable (eye scans, body scans, clipper chips, satellite-driven privacy invasion, drones, etc.) and clandestine US machinations in Cambodia, Chile, Afghanistan, Yeltsin’s Russia, and Egyptian and Iraqi dictatorships had yet to come. In this light, what was going on during the Korean War seems like playground antics in comparison.

Therefore, it is wiser to see the story as the emblematic work of its time that it is rather than measuring up to a 2015 thriller. Wikileaks and constitutional questions swirling around  the treatment of Chelsea Manning, Edward Snowden, Stephen Kim, Aaron Swartz and others show that we passed through Condon’s purview decades ago. That said, however, Condon wanted his readers to question the fundamentals of espionage, war, and the taxpaying public’s right and responsibility to know, all of which are immediately relevant. To point: The Manchurian Candidate opera is a period piece that clearly resonates now. The contours of Condon’s concerns are still with us and urgently worth reflecting on. 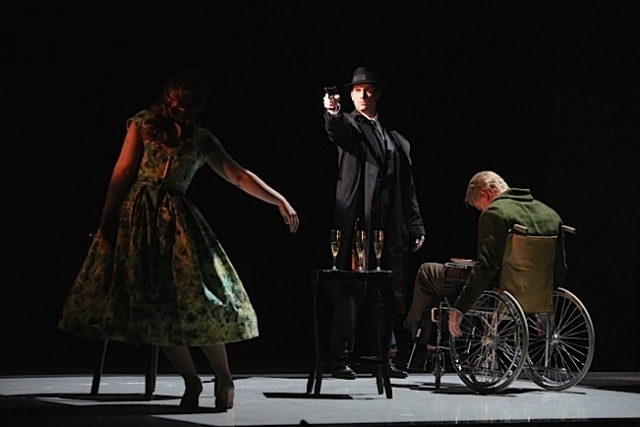 What Puts, Campbell and director Kevin Newbury have so remarkably well done is to portray political dynamics still with us. And I have to say Campbell is the one who has most powerfully guided this. Today we have religious extremism v. global capitalism, whereas in Condon’s world it’s Communism v. Democracy cat-and-mousemanship. But there are uncanny parallels between the two primarily because the US still milks the Cold War paradigm.

Those who astutely track politics will grasp how Condon’s Soviet-Chinese coalition interprets, and, pardon the term, “capitalizes”, on middle-American paranoia. Moreover, we see how jingoistic US politicians shamelessly catered and still do cater to red-baiting bogeyman abstractions. This mischief plays compellingly on the operatic stage. The political ballyhoo scenes are unnervingly reminiscent of today with the bread and circus mentality that major party politicians on both sides and corporate media foist on a dumbed-down public.

What makes The Manchurian Candidate a great opera and why the audience the night I attended was so enthusiastic (a white straight couple next to me was on the edge of their seats throughout, as I was too) is because Puts’s music matched with Newbury’s breathtakingly staged images plumb the titanic profundity beneath the story. We deeply sense the dehumanizing effect of governments using people and their families as pawns. And of families that don’t play the game making the ultimate sacrifice while an apathetic and-or propagandized public goes around brain-dead. 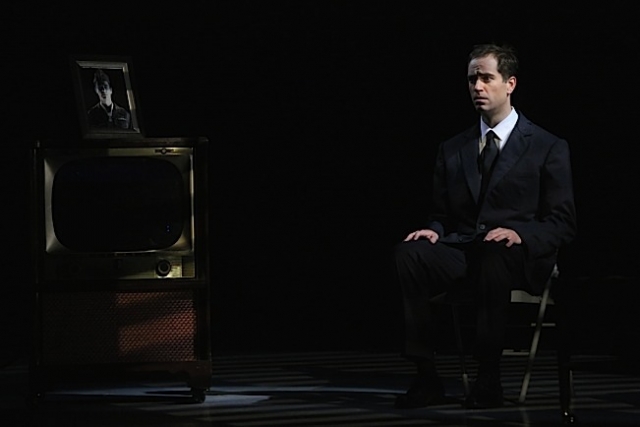 All voices are superior in precise connection with the score’s eclectic demands. The physicality of all characters are superbly etched by the singers. Baritone Matthew Worth brings penetrating power to Sergeant Shaw. Brenda Harris plays the daunting role of Eleanor, immortalized by the great Angela Lansbury in the iconic 1962 film*.  Her character has incestuous feelings for her son and a doggedly deterministic view toward her function as a subversive. Harris portrays this splendidly and makes it her own. Tenor Leonardo Capalbo brings Apollonian strength to Ben Marco, Shaw’s platoon-mate who figures out what the communists have done. Bass Daniel Sumegi brings appropriately coarse boisterousness to Senator Iselin. 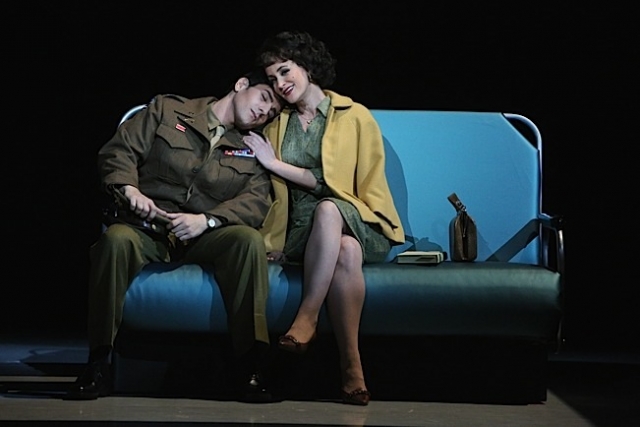 *Aspects of the film are discussed in the Lavender online article, Emblematic “Manchurian Candidate” now an Opera.