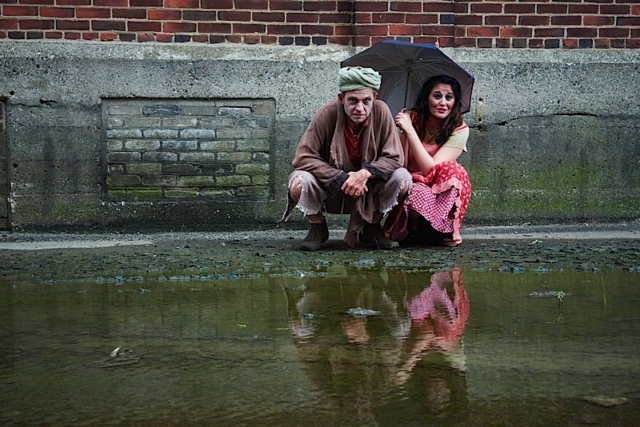 Playwright Bertolt Brecht was blisteringly critical of how the constant hustle and clamoring for money degraded the human spirit and diminished our capacity to empathize with one another. Director Wendy Knox and Frank Theatre have staged a captivating on-site production of a striking example of that in The Good Person of Setzuan. This translation by Wendy Arons and adaptation by Tony Kushner (Angels in America) is played on-site in the back area of a vacant Rainbow Foods store near the Lake Street Light Rail station in Minneapolis.

Emily A. Grodzick shines as Shin Te, a virtuous sex worker, whom the gods are considering may be the only good person left on earth. Grodzick also crackles in this double role concept as Shui Ta, Shin Te’s, male alter ego, a man of bad character. To exploit others is his modus operandi. The actress deftly switches between the two roles throughout the three hours of traffic on the stage.

Katherine Ferrand, Janis Hardy, and Ellen Apel are infuriatingly effective as three gods who sit in adjudication of Shin Te. They have shockingly little capacity to even grasp the human condition, much less empathize with it.

John Middleton beguiles as a man with natural and societal advantages. He seems to have an innate knack for undercutting those less advantaged.

The large ensemble is masterful with a stylistic mix of the vaudevillian, the clownish, and the grotesque. All the actors play their scenes with well paced comic flair, always grasping the rich philosophical and economic ideas that lie within and beneath the words. Moreover, they give visceral testimony to how the prolonged scrambling for mere subsistence eats away at human dignity.

Kathy Kohl’s costumes, Mike Wangen’s lighting, Dan Dukich’s music and sound design add to the atmosphere. Scenic designer Joe Stanley turns clutter and junk into a work of art in itself at the unique on-site location.