If you don’t know the girls of The Kinsey Sicks, you should. And really, why don’t you know our cover girls? For over 20 years, “America’s Favorite Dragapella Beautyshop Quartet” has been dishing up their award-winning a cappella singing, sharp satire, and over-the-top drag, earning The Kinsey Sicks a diverse and devoted following. 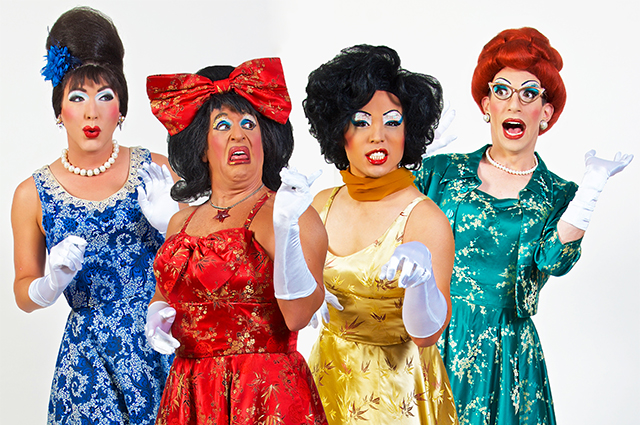 The Kinsey Sicks began in 1993 as a group of friends who went to a Bette Midler concert in San Francisco dressed as the Andrews Sisters. Assuming they’d be among many drag queens, they found themselves to be the only ones. In a matter of happenstance, they were approached that night to perform at an upcoming event. Their reply — “We don’t sing!” — was quickly disproved when they realized that all of them had musical backgrounds. They began singing and harmonizing that night, and the seed for The Kinsey Sicks was planted.

Since drawing a crowd at their first public performance (it was 1994…on a street corner…in San Francisco’s Castro District), The Kinsey Sicks have produced and performed full-length theatrical productions around the country and have toured internationally. In 2001, the girls produced and starred in the critically acclaimed Off-Broadway hit, Dragapella! Starring The Kinsey Sicks at New York’s legendary Studio 54. That production received a nomination for a Lucille Lortel award (the Off-Broadway Tony) as Best Musical and a Drama Desk nomination for Best Lyrics. In 2006 the girls wowed audiences once again with a much-coveted extended run at the Las Vegas Hilton. The show was ranked by critics as one of the best shows in Vegas.

But wait, there’s more! The Kinsey Sicks have recorded eight albums, they have been profiled on national television, including 20/20 and CBS Early Show with Bryant Gumbel. If you haven’t guessed, these girls are busy. Never ones to lay down on the job, The Kinsey Sicks are also the subjects of two feature films: a concert film, I Wanna Be a Republican and a behind-the-scenes documentary, Almost Infamous, chronicling the adventure of the group’s extended run at the Las Vegas Hilton.

You’re going to want to be sure to make it to their Twin Cities appearance at the end of September. You don’t want to miss your chance to see Winnie, Rachel, Trixie, and Trampolina do what they do best: “the most interactive dragapella musical extravaganza ever” — featuring all new songs!