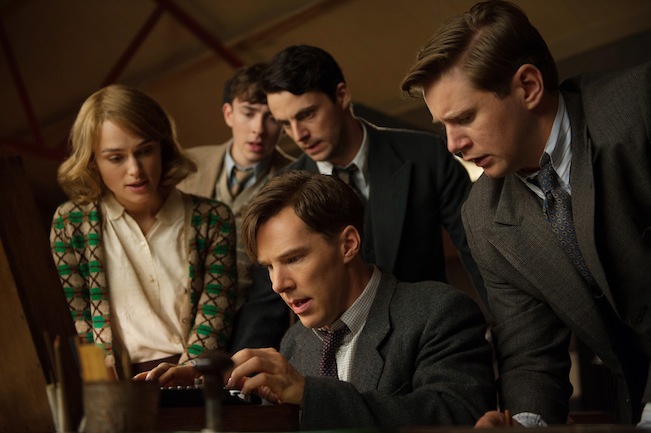 Englishman Alan Turing is perhaps the most consequential gay man to make his mark on the planet since Alexander the Great. However, Turing stopped the slaughter of multitudes, whereas Alexander did the opposite. Turing was the man who broke the Nazis’ “unbreakable” Enigma Code, which turned Allied Europe, USSR, and USA away from what looked like German triumph into a decisive Allied one.

The magnificent new film, The Imitation Game, directed by Morten Tyldum, reflects Turing’s intense time at the Bletchley Radio facility in Buckinghamshire where he led a secret select team of codebreaker specialists.

Benedict Cumberbatch’s Oscar-caliber performance has been judged by some to have overdone some of his tics and quirks but at its core it is a deeply sensitive portrayal. The actor gets to the heart of the man who was always compelled to suppress his innermost feelings as a boy, his natural homosexual instincts as both a boy and a man, and who was unflappably committed to his mathematical truth whether challenged by anti-intellectual military leaders or careerist specialist toadies who envied his mind and resented his success.

However, as the film makes clear, during and after the war Turing had to keep his monumental contribution under wraps, so there were no parades marched in his honor.

Bear in mind that homosexuality was outright illegal in the UK until 1967. The Imitation Game flashes back and forth between wartime and the early 1950s when misguided police work turned homophobic and set the stage for his suicide. Turing was arrested for indecent conduct, charged with and convicted of gross indecency, and made to endure cruel and unusual punishment (chemical castration). To her unconscionable disgrace, Queen Elizabeth II knighted him posthumously in 2013. 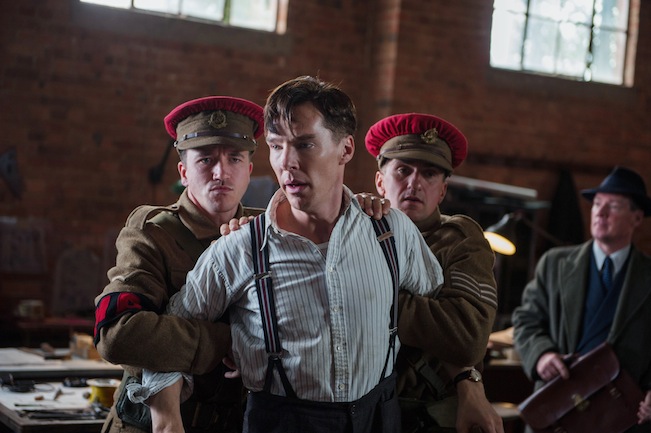 Benedict Cumberbatch, as Alan Turing, is forced out of the office.
Photo courtesy of The Weinstein Company

The film’s other luminous performance is the ever-splendid Keira Knightley who plays Joan Clarke, the one woman whom the innately progressive Turing insists be included in the select group. The suffocating socially perilous way in which Clarke feels she must adhere to Victorianesque female gender protocols, rather than serve an essential part of the codebreaking that would save the Allies, is stunningly elicited. I say socially perilous as this is a looming example of institutionalized misogyny where a woman’s viewpoint was almost systematically squelched to the detriment of the UK’s very existence! Moreover, the scenes between the actor and actress where his homosexual issues come into play are profoundly mesmerizing.

Though these two biggest roles are resplendent, the rest of the cast is also. Charles Dance as Commander Alastair Denniston embodies the full essence of outmoded military approaches that stupidly thwart desperately needed new ones. No wonder the allies were losing. Ironically and thankfully, it was conservative Prime Minister Winston Churchill who trusted Turing rather than the anal-retentive good old boys.

Mark Strong, who blew us away, as the closeted gay spy in Tinker Tailor Soldier Spy a few years back, is magnetically elusive as Major General Stewart Menzies. He reveals a man with an ingenious knack for holding what he knows hermetically close to the vest. The adorable Alan Leech who the world knows as the Irish socialist firebrand in Downton Abbey, is incisive as Turing’s one associate, John Cairncross, who perceives his gayness.

The 1950s segments, set in Manchester, vividly reflect the homophobic judgements against male/male sex. Rory Kinnear captivates as an inspector who did not intend for zealous law enforcement to take the homophobic upper hand that it so atrociously and tragically did.