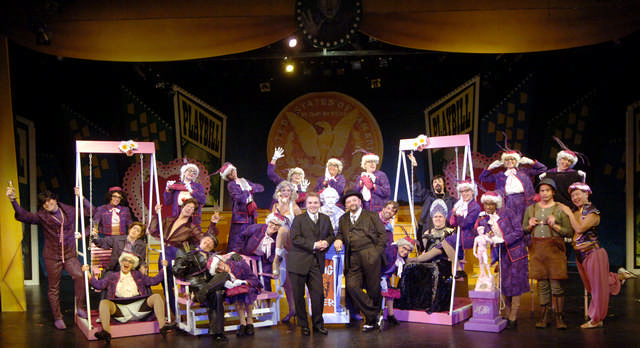 The musical theater genre is perennially identified with gay artistry. When you see a professional production of a work by Rodgers and Hammerstein or Andrew Lloyd Webber you can bet that considerable queer energy has gone into it. Some of the looming generators of musical themselves were or are gay: Jerry Herman, Stephen Sondheim, Cole Porter, Nicholas Dante, Arthur Laurents, and Marc Shaiman, just to name a few. When you look back on the 50-year history of Chanhassen Dinner Theatres, you’ll note the talents of all of these musical giants.

The musical genre, also referred to as musical comedy, is generally considered to be a fundamentally American art form. Hence, there is an inherent need for American society to preserve it. But a classic musical or a first-rate recent musical cannot manifest in a way a great painting in an art museum does. Theater is a live phenomenon as opposed to dramatic literature bound in a book and musical notes on a page. In other words, for theater to actually exist in reality, it has to be actual living people performing before a live human audience. This means that the script, which is referred to as the book for the musical, and the musical composition and lyrics, have to be revivified into concrete present reality. This is something that CDT has been doing prolifically and enchantingly at the highest standard for half a century. 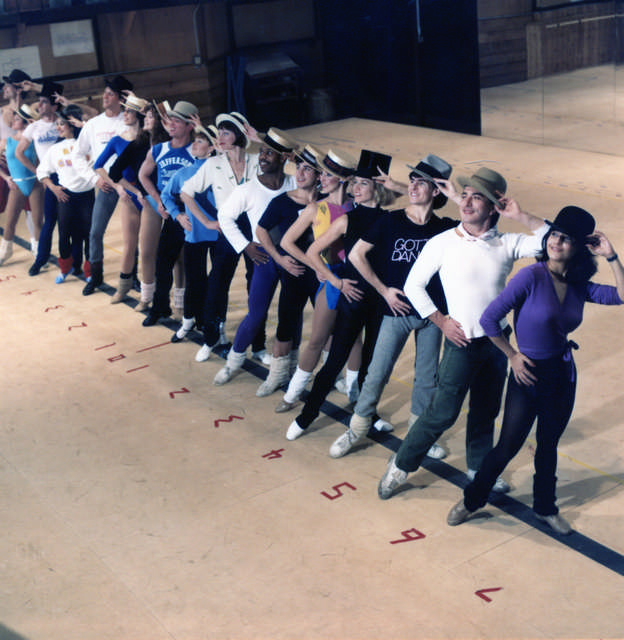 The classic musical A Chorus Line, seen here in a rehearsal, is a popular production hosted at CDT. Photo courtesy of the Chanhassen Dinner Theatres Archives

Chanhassen Dinner Theatres, in south suburban Chanhassen, has a Main Stage that accommodates 628 patrons total with a delicious menu. Currently there are two other smaller stages in the facility. On The Playhouse Stage, you can catch Stevie Ray’s Comedy Cabaret every Friday and Saturday and the Fireside Stage Concert Series is a major draw with upcoming performances swinging to the sounds made legendary by Sinatra, Streisand, The Beatles, Fleetwood Mac, James Brown, Ray Charles, and even Led Zeppelin. The Courtyard/The Club space is no longer used for productions but it’s a dandy spot for wedding receptions.

In the Fireside Theater space, the musical I Do! I Do! ran from 1971 to 1993 with the same cast, making it the longest running show in Twin Cities history. The smaller spaces have also facilitated little musical gems like Altar Boyz and Forever Plaid and nonmusical gems such as the gritty Loot by gay renegade Joe Orton and gay playwright Noel Coward’s sophisticated Private LIves. 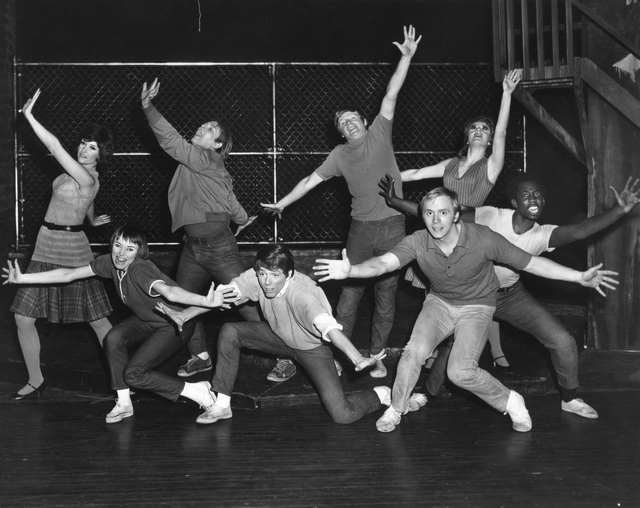 Actor John Command, front center, was a stalwart of the early days of Chanhassen Dinner Theatres, seen here in a production of West Side Story in 1969. Photo by Michael Paul

For five decades, CDT has been a steady employer of theater artists from the GLBT population. When you refer to a CDT actor that carries with it that they not only act, but also sing and dance. Musicians are members of the Twin Cities’ Musicians Union, just as actors belong to Actors Equity. All production elements are built on site. CDT employs almost 300 people and 250,000 guests attend annually.

Rich Hamson was named Lavender Magazine‘s Theater Artist of 2014 and is noted as one of the nation’s great costume designers for his brilliant CDT record. He has worked closely with Artistic Director Michael Brindisi and chief choreographer Tamara Kangas-Erickson who are also co-owners along with Steven L. Peters.

Hamson relates, “What I love most about working for Chanhassen is, as a designer, you are encouraged to take risks and let your imagination fly. Michael and Tam are always interested in our interpretations of their artistic visions and value our creative input. That is not always the case in other theaters. I feel that I am encouraged to grow and challenge myself with every show. It keeps me thinking creatively.”

Artistic Director Michael Brindisi directed CDT’s 2008 gay-themed hit The Producers and Camelot, named Lavender‘s Best Production, and Brindisi Best Director, of 2016. He acknowledges that “the theater is a place where people are free to be who they are. People can relax because they are accepted. That’s why gay people are great actors, musicians, designers, directors, writer, painters—it’s because the arts allow them to BE. Our world here is about allowing people to be people.”

Moreover, musical theater is central to gay culture, just as gays have always been central to music creation. This is certainly true in the West, going back to the majestic church music dating back centuries ago. This current runs through the great river of GLBT energy that has always streamed through Chanhassen. This doesn’t mean that every musical is filled with GLBT content, but what lies in the ether is just as significant.

However, sometimes such content does fill a work, such as the production of A Chorus Line, a landmark in gay portrayals in the musical genre. The Pulitzer Prize-winner was staged on the Chanhassen Main Stage eleven years after its Off-Broadway premiere. 1986 was the height of the AIDS Crisis and the Chanhassen audience was, and still is, often wrongly stereotyped as ultra-conservative. Indeed, the theaters in the CDT facility draw great numbers from the entire five-state region and the assumption is that this demographic disrespects gays. That’s a blanket generalization that also points more truthfully to Middle America’s love for musicals. And people by and large understand that gays are and have been central to that. I always think of cowboy and business men types of my childhood and since who loved and love Oklahoma! and Guys and Dolls. And they were/are straight guys.

Actor Thomas Schumacher, who appears in the current acclaimed CDT staging of Disney’s Newsies, also appeared in CDT’s acclaimed A Chorus Line during the Reagan ’80s at the height of the AIDS crisis when shows, new or revived, dealing with gay themes tended to be stored in the closet. But CDT, despite its place as the region’s most mainstream of professional theaters, wasn’t intimidated.

Schumacher recalls, “The 1986 production was directed and choreographed by Trish Garland, the woman who created the role of Judy Turner in the original production in NYC. She recreated the original staging and dances and it was so exciting to be part of a show. A Chorus Line does contain strong language, openly confronts issues of sexuality, and portrays several gay characters, all of which made it a bold choice for CDT in 1986. Probably the most memorable gay character is Paul, who has a long monologue in which he tells us of his life, his struggles and his family. In our production, the role was first played by Stephen Crenshaw.”

Schumacher further reflects, “Sadly, the AIDS health crisis was never far from anyone’s thoughts and it hovered like a black cloud over the entire theatrical community.”

Regarding change and continuity over the years at CDT, he says he is happy for his years of experience in Chanhassen. Schumacher is currently appearing in CDT’s marvelous staging of Disney’s Newsies, directed by Brindisi. He adds that he has “seen the theater weather bad times and boon times, surviving in a business where we all learn to struggle and scrape together careers because there is nothing else we would rather do or love as much.”

This Chan veteran is also clearly the go-to man on company history: “CDT was founded by the Bloomberg family and is now run by a group of people who still truly are a family: savvy dedicated artists, business people and theater-lovers, unafraid to confront and make the difficult decisions and reveling in the triumphs. I recall the words of one of the owners who addressed the company on a first day of rehearsal for a new show. He had come on board when CDT was changing hands and he spoke of CDT as a treasure, a place which needed to be preserved. I couldn’t agree more. In my eyes the future for the theater has never looked brighter as it celebrates its 50-year anniversary and sits poised to joyfully march toward 100.”

Actor Andre Shoals is a relative newcomer to the CDT tradition. He has certainly felt the love there: “As a performer/artist it’s important to work with people you can trust. This is also true for the places we work. Feeling safe in a working environment when it comes to creating work is essential. As actors we often find ourselves in vulnerable situations, whether it’s trying out a new character, learning choreography, or singing new material. That safe space we operate within is created by the director usually. Having worked with CDT over the last five years has been a wonderful experience. Not just because Michael Brindisi and Tamara Kangas-Erickson provide such a safe and nurturing environment for us to explore, expand, and grow as artists; they’ve managed to run a business which fosters an inclusive vibe as well as a sense of community (family). A few years ago my father passed away from brain cancer. Chanhassen Dinner Theatres showed up and out for me. Everyone from my fellow actors, to the office staff, box office, and kitchen staff took up a donation to help off set the cost of laying my father to rest. It’s that sense of family and caring that has helped many of us through the years and I am truly grateful for that.”