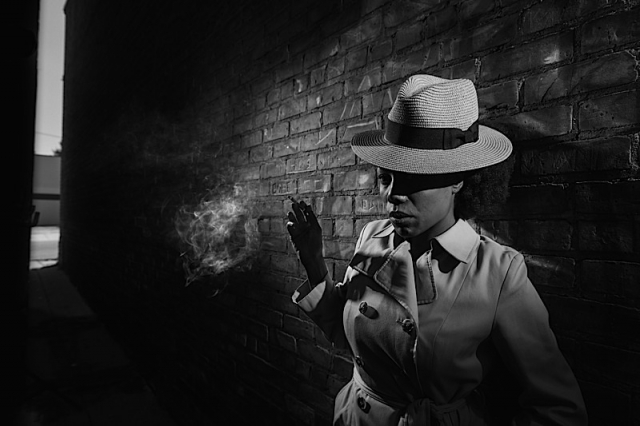 Playwright Christina Ham has written a delightfully compelling new crime mystery, very different from two of her previous first-rate works, Crash Test Dummies and Nina Simone: Four Women. In the also first-rate West of Central she scrupulously observes the conceits, language, and style of film noir and gumshoe fiction in the vein of Raymond Chandler and Dashiell Hammett. At Pillsbury House, Hayley Finn has directed a premiere production that glistens with the film noir sensibility. Her cast is led by a luminous Austene Van in an elegantly streetsmart performance as Thelma Higgens, a Los Angeles detective thrust into the violence of a 1960s criminal enterprise seemingly right out of the blue.

Harry Waters Jr. plays Thelma’s detective husband and business partner, Vernon. This pair’s chemistry electrically captures a working class couple whose innate compass for getting to the truth, despite many twists and turns, is subtly inspirational. I’ve never seen Waters in a role like this. His crisply delivered portrayal presents a man who seems to be devious, yet we sense there’s a valid reason for that. Waters is a revelation.

A coldly understated Stephen Yoakam well suits the role of Sidney Franklin, a barracuda-like real estate developer who exploits black community housing needs. A white man, he takes sees the contemporaneous 1966 Watts riots as yet another chance to make a killing, no matter how many black families are thrown onto the streets.

The entire cast masters the potboiler vocabulary with finesse and sharp timing. Ham deftly subverts the noir genre whose golden age was during 1940s-’50s Hollywood and its 1970s resurgence with the Blaxploitation subgenre and Roman Polanski’s Chinatown.

For Ham, however, Thelma replaces the lead role, the sort of which would have been played by man such as Humphrey Bogart or Dana Andrews in the ’40s. The elegant Van blends the assured glamorous persona of someone like Barbara Stanwyck with the moxie of Pam Grier, icon of ’70s black noir. Truly marvelous!

The stock femme fatale of noir is sensually realized by Olivia Wilusz as Franklin’s over-privileged daughter, the insidious June. Like father, like daughter. Aimee K. Bryant is simply fabulous as the boozy Hazel Tyler whose words seems to indicate she is bisexual or lesbian. Bryant is uncannily reminiscent of brassy Vintage Hollywood icons Joan Blondell and Shelley Winters.

Brian A. Grandison and Theo Langason give fine performances as men of color in advantageous positions. We are made to weigh their integrity to their race vs. their complicity with a system stacked against blacks.