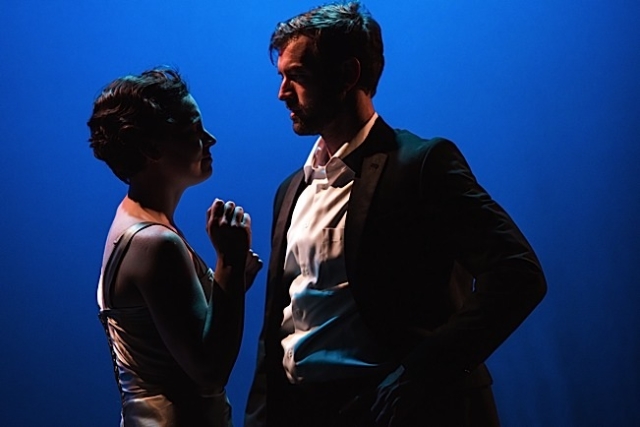 Note: The her/his, he/she use throughout this is because Jane Martin is a pen name for someone whose gender has not be revealed, who has remained in the shadows. There is ongoing discussion about whether Jane Martin is a man or a woman. Martin’s politics are assertively left wing and feminist. This is obvious throughout her/his canon.

Jane Martin loves to provoke us with extremes. In H20, two seemingly opposite people attract one another. Deborah is an evangelical Christian actress in her mid-20s who has been struggling in her acting career for a while. Jake is a debauched action movie star.

Deborah primarily acts Shakespeare as a way of expressing her religious views though she never gets into any theological explanation of how she has come to that expression. The quite possibly bisexual Bard was hardly the Puritan monogamist Prince Charming fantasy that Deborah seems to delude herself that she walks in the footsteps of. In fact, the Puritan movement of his time hated him and you can understand that by examining his plays’ contents. Moreover, women were not even allowed to act on the Elizabethan era stage. On a large scale, women were also discouraged to learn to read. That said, true believers of whatever stripe often appropriate art and literature for their own purposes. And Shakespeare has often been defiled. 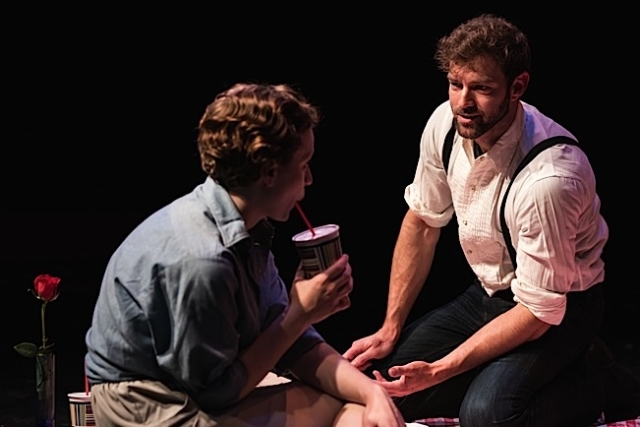 Jake is reminiscent of Michael Keaton’s Birdman. He is a man who on some buried level intuits that his approach to film craft is third rate. He has few lines in his films but he is skilled at action scenes, which, to be fair, does indeed take ability. Though one may not like or approve of his action film product and the way the genre is generally intended to dumb down males, the physical ability required should be respected. (This brings up the irony of how right wing media always bombards “Hollywood” for being liberal and anti-American, but the action film which is the film industry’s bread and butter generally, with some exceptions, supplies the nation with a steady stream of might equals right, men had better be tough, women had better be sexy, the world is a scary place and it takes lots of guns, car crashes, and explosions to get us through the storm. And lots and lots of money is made, and government contracts satisfied, by keeping that fear in the public’s mind constantly. And for god’s sake, keep dialogue to a minimum so there’s no chance of penetrating any interior humanity.)

You’ve got to give Jake credit for understanding that unbridled machismo is nothing extraordinary. He knows you can go to countless street corners all over the country and the rest of the world to see prime examples of that.  He just got lucky in stardom finding him. To movie moguls, guys like Jake are a dime a dozen. 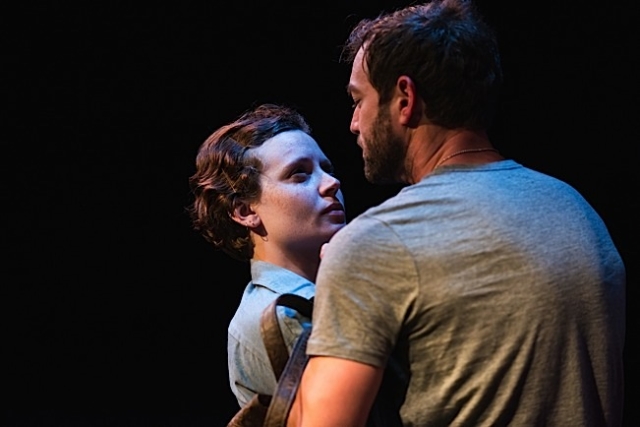 To compensate for his inferiority feelings as an actor, Jake gets the chance to play Hamlet. It would give him credibility. But film acting won’t ever develop the chops vital to playing the most demanding role in Shakespeare. Like many unformed actors, Jake overestimates his ability. Worse still, he is undisciplined as a man, a sexual being, and an artist. His narcissistic, exterior approach to film acting is no grounding for playing the Prince of Denmark, with all the character’s many, many lines, emotional dimensions, quick shifts of intention, and the implicit need an actor must have of its feudal context.

H20 follows the audition and rehearsal process as experienced by Jake and Deborah, who by a stroke of bizarre luck, plays Ophelia (the play’s tragic maiden manipulated by her father and Hamlet’s corrupt uncle) to his Hamlet. The play chronicles Deborah’s understandable need to maintain boundaries against Jake and his resigned debauched attitude. She deludes herself with the idea that she is doing this for God, so to speak, but her ego and ambition are very much at play. Like any number of people devoted to a belief system, she expects him to somehow understand the details and specifics of her spiritual constructs even though he has not been schooled in it. It’s a scurrilous way of saying “you’d better understand everything about my belief system and exactly how to word it or I get to make you wrong.” If this sounds familiar, it is: many people focused on identity politics run the same racket. In the glbtq community there is currently fierce debate about use of new terminology that.) 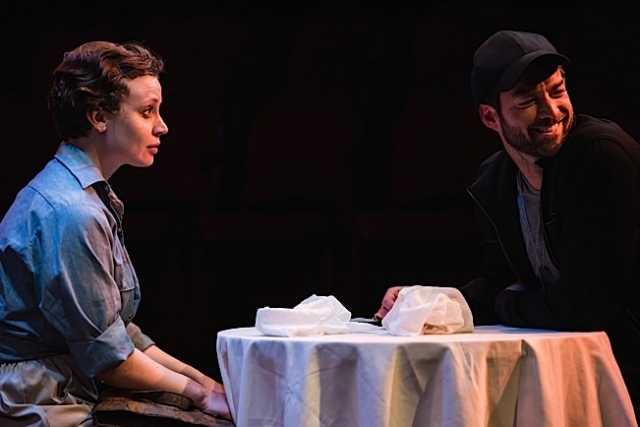 One of the Martin’s achievements here is Deborah’s very specific take on Christianity. To really get to know her, you’d need to first take a class -seriously- in knowing how she thinks. Compare it to the overly generally way playwright Tony Kushner delineates Mormonism in Angels in America. It is interchangeable with any number of conservative Christian sources. But Martin knows her/his stuff. In the Gremlin Theatre production at the Minneapolis Theater Garage Ashley Rose Montondo gives an exquisitely layered performance as Deborah. You feel as if you were actually to meet the character as she plays it, you’d have to walk on eggshells so as not to say something to trigger her self-righteousness and condescension disguised as gentleness.

Unfortunately, Jake is written by Martin as a macho stereotype. When he understandably is devastated by an act of sweetness he bestows on Deborah before their Hamlet performance, we see Deborah’s truly deep-seated hatred of masculinity that doesn’t fit her standards. Tough, inarticulate men are almost always at the effect of more articulate people of whatever gender. I wonder to what degree Martin is sensitized to this.

I suggest that Martin take in the early gems of director Robert Wise, The Set-Up and Somebody Up There Likes Me. That would be a good start at seriously, rather than contemptuously, making an effort to understand very masculine men. Yes, they can be horribly difficult. But they can also be equally wonderful and life-affirming.

Thankfully, Gremlin’s Peter Christian Hansen makes the very best of the role. Since Jake has no real religious background, he is easily manipulated by Deborah’s mixed messages sprung from her unconscious Messiah Complex. For her, he is raw meat. She clearly has the power, like a computer chip.

As someone brought up in and around evangelical and Pentecostal realms, her “baptism” in the restaurant and her snake-handling joke would have been seen by many as blasphemous. Deborah’s holier-than-thou attitude and misshapen Gospel According to Shakespeare is irrational, ignorant, and self-serving. 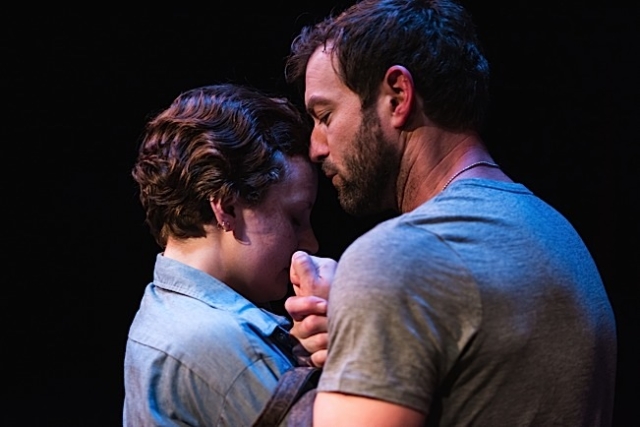 This is yet another text-driven triumph by director Ellen Fenster who continues to bring out the excitement, the stakes, the powerful themes, and the raw emotional power of plays that demand the actors really give of themselves. With H20, Fenster, Montondo, and Hansen give generously with solid support from nonspeaking functional bit role players. They might even fool you into thinking it is a great play.

But if it were to be considered that, Martin would have to create the characters in the script that her two actual characters refer to on stage into speaking roles, so we could actually get a fuller view of the challenges they face beyond their relationship. But if that happened, one might get an understanding of what Jake is really up against with fellow Hamlet cast members. And you’d have to consider that Deborah’s relationship with her father is problematic to say the least. You just hear about these things in this current form. But that’s where the truth about these two actually lies.