“The Drunken City” Delights While Raising Questions About Marital Choices 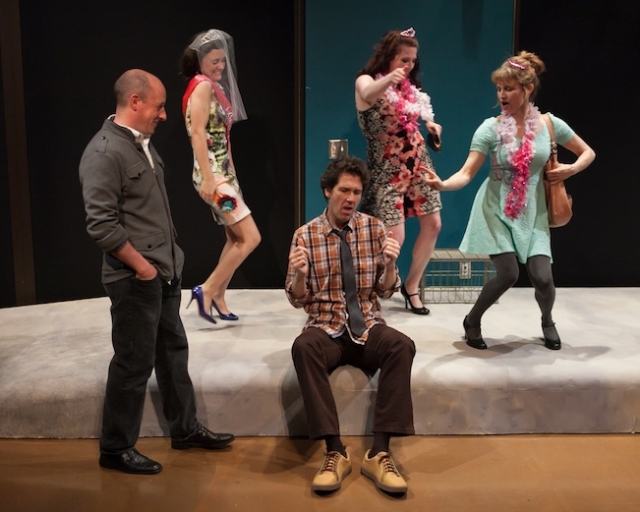 A liquor-laden bachelorettes’ night triggers all sorts of discombobulating questions when three young women venture downtown to celebrate one of their trio’s impending marriage in The Drunken City. This breezy but thoughtful play by Adam Bock is now enjoying a hilarious Dark & Stormy production at the Lyric Lab at Carleton Place in St. Paul.

Away from her settled suburban life, Marnie (Sara Marsh) gets a clearer perspective, despite the booze, on the life-altering decision she is just about to carry out when Fate puts her in touch with Frank (Kris L. Nelson). And then the doubts come rolling in.

Director Bill McCallum’s splendid cast gives madcap, yet truly human portrayals that capture the high stakes. Marnie’s controlling friend, Melissa (Adelin Phelps), will have none of it, while her other pal, the free-flowing Linda (Tracey Maloney), is more hands-off. Marsh, Phelps, and Maloney have created a brilliant symbiotic triple stage presence that is a kind of fluid force of comedic nature. It’s an example of actors who are so connected that when their characters’ conflicting views and distinct personalities are faced with an existential dilemma, there is a palpable sense of group identity crisis. All three characters deeply bonded long before the night the play takes place and chose long ago to have their lives follow a certain trajectory, not having yet grasped the reality that life for most people life is often disrupted and filled with change. For Melissa to be happy, Marnie must be happy, and Linda craves harmony.

Nelson, as usual, is excellent. His Frank shines like a ray of higher consciousness on the wings of love. In Bock’s view Love is the Law and The Higher Power, even for supporting characters like Bob (Ben McGovern) and Eddie (Paul De Cordova). De Cordova is a delight and though I’ve followed McGovern’s work for several years, I honestly didn’t recognize him until well into watching the show. He gives an endearing and transformational performance.