“The Coward” – Crossgender Cast Walks a Mile in Men’s Shoes and it’s Wonderful to Behold! 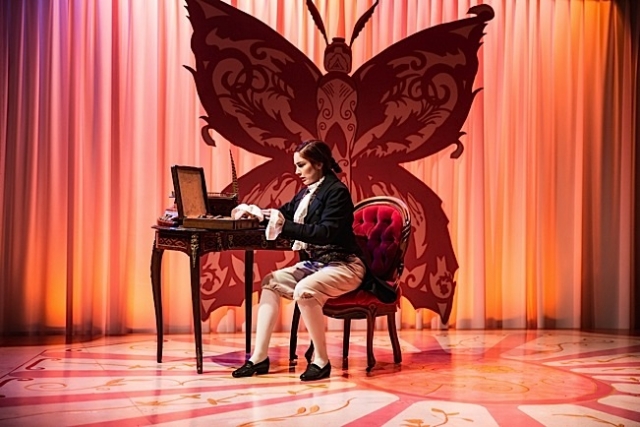 The Coward by contemporary playwright Nick Jones is a madcap comedy set in late 18th century England when duels were seen as a reasonable way to defend one’s honor. The militaristic traditions of patriarchal cultures since antiquity made “manly honor” a standard expectation of how a man was to behave, even if it meant losing his life.

To die honorably was to die well. To even think of not buying into such a concept was to be stigmatized and ostracized, if not killed. False accusations and insults about a man’s family member were considered legitimate reasons for men to face off. However, sometimes the pettiest slight against someone -looking at them for a moment “too long” or commenting on a man’s clothing in a way perceived as unfavorable- could actually be justified by neurotic or psychotic men as justifiable. The duel tradition was a mine field for men.

Walking Shadow Theatre has mounted an incisively witty production of The Coward and what makes it significant is that all the male roles are played by women and the single male role is played by a man. This means that the actresses are compelled to dig into the patriarchal underpinnings that men of the time, and to some extent our time, are bound to. This means a mix of empathy while still maintaining a stylized comic vitality. 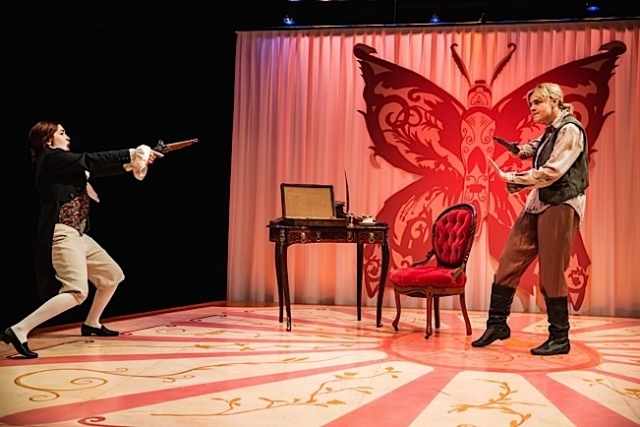 Director Amy Rummenie’s cast has penetrated the honor code with lucid intelligence and liveliness. Briana Patnode is able to make us feel the profound frustration of a young man who does not want to kill anyone. As protagonist Lucidus, she mines the anguish with true sensitivity. We see the systematized shaming that was/is used to keep men in line. It is Patnode’s best performance yet. 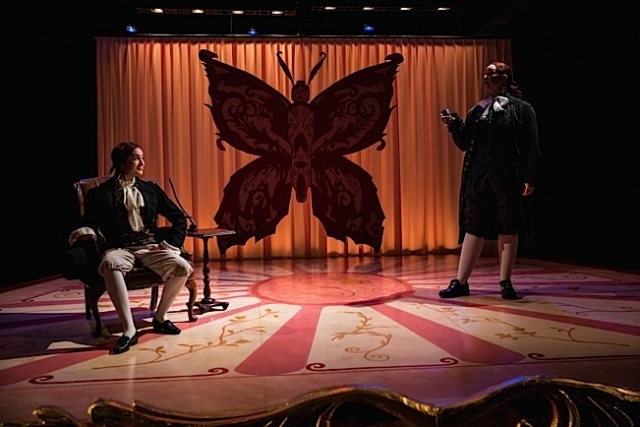 A steely Jean Wolff is commanding and unsettling yet hilarious as Lucidus’s violence-lusting father. He thinks that the only way to prove one’s manhood is to be an accomplished duelist and Lucidus’s lack of dueling experience at the top of the play is a source of utter shame for the father. A rough modern equivalent is the father ashamed of his son for not playing sports or not playing them well enough. Think also of sports enthusiasts who become brusquely fanatical.

The entire cast is superb and their timing is excellent. Chase Burns’s turn as a narcissistic noblewoman is wacky fun. The female cast members have all come to understand the way men themselves are suffocated by patriarchy. It’s a beautiful thing to see this large, almost all female cast, give over to understanding that. Indeed, there is something truly unique about this.