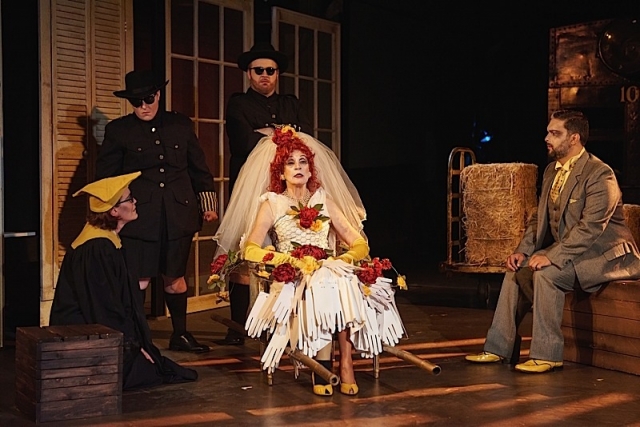 The 1956 dark comedy from Switzerland, The Visit, is made to order for Frank Theatre. Artistic director Wendy Knox is a top-notch interpreter of 20th century European plays and her staging of Friedrich Durrenmatt’s indictment of societal double standards is scorchingly relevant at this particular juncture in time. What’s so refreshing about Knox’s production at the Minnesota Transportation Museum is that she approaches the text strictly on its own terms, not bending or modifying it to unnecessarily stress its current timeliness. The translation by Maurice Valency is notable for how it moves dynamically, yet with profound philosophical content all the while. In this aspect, The Visit is similar to Frankenstein—Playing With Fire, now on stage at the Guthrie Theater. Like Rob Melrose’s staging of that production, Knox breathes penetrating philosophical ideas into urgent life.

Those who’ve seen veteran actress Katherine Ferrand, admired for her superb delicate performances, may not even recognize her in the cold leading role of Claire, a former prostitute who returns to the economically depressed hometown where she was ostracized at age 17 and cruelly abandoned by Anton (Mark Rhein), the youth who had impregnated her out of wedlock. Anton has settled into a successful family life and is next in line to serve as the small town’s mayor. Vengeful Claire, now stupendously wealthy, offers the townsfolk a billion francs to execute Anton. It’s essentially a bribe so that they do her dirty work. She preys on their collective moral weakness. Claire also has phyiscal infirmities that in another context we might have sympathy for, but here they seem to be a part of her larger grotesqueness. One is reminded of Peter Sellers’s fanatical Dr. Strangelove in the Kubrick film.

Claire has dementedly overgeneralized her vengeance mission against one man for what he did in youth, which granted was certainly awful. Her offer shrewdly ensures that the whole population, including those born long after the wrongdoing, turn on him. Once Anton is murdered by the mob, they’ll receive the blood money. However, until then they profligately go into debt before collecting, buying material objects on credit which they cannot afford. It’s nothing short of a perversely gleeful spending spree run amok as they rub Anton’s wrongdoing against Claire (not them) in his face. To add insult to injury, this shaming is done by those who never actually were done wrong by him. Worse yet, Anton’s own family abandons their love for him.

Ferrand and Rhein are remarkable in two richly textured performances. Each play their roles with a deep comprehension of the psychic wounding from the original ostracism. She as the victim who could never let go over decades. He as the victimizer, whose guilt and shame over his wrongdoing, has eaten away at him like a cancer of the soul ever since. That said, in Ferrand’s portrayal, the cancer analogy is applicable as well. Vengeance contaminates. As the play stealthily progresses you can palpably sense they both hunger for closure.

Better yet, Ferrand and Knox have resisted the two-dimensional trap that lesser productions of The Visit fall into. That trap is when Claire is portrayed as pure haughty authoritarian vengefulness. The role is easily, and even fetchingly, turned into a kind of Norma Desmond, the madly narcissistic silent film has-been of the film classic, Sunset Boulevard. However, Claire is not this. She is more than that.  She may be narcissistic, among many other things as well, but the underpinnings are not the same. Ferrand and Knox have understood this. This actress rides the crest of Claire’s stridently vengeful wave throughout, yet she is still three-dimensional – tormented on some level by unrequited love for Anton, by regrets sprung from cruel experience, unbridled self-pity, and much that the wonderful Ferrand seems to have mined from the subtext. Hence, the audience must contend with their own lack of forgiveness. This is what the craft of acting is all about. And is this not why in most cases, substantive playwrights write plays to begin with?

Where the two lead characters are three-dimensional, the supporting cast is two-dimensional and rightly so. They become cogs in the mob which Claire has incited. Like all mobs, they are devoid of rational thought. Heather Bunch vividly embodies the hypocrisy of the local school master, the town’s supposedly reliable voice of reason, who rationalizes the craven pull of greed. Vinecia Coleman, in turn, nonchalantly embodies corrupted Christianity in the role of the town pastor who goes along with it all. It’s an uncanny look into how collective cruelty is set into motion when society’s fundamental institutions are cleverly undermined. Nihilism conquers and vanquishes. Human decency be damned.

The Minnesota Transportation Museum site suits The Visit splendidly because the town’s train station is core to the setting in which locomotives are the vehicles by which consequential ideas, characters and groups, the press being one of them, are injected into the village. The imposing front section of an actual train dimly looms upstage as if in wait to barrel into the town like an avenging angel poised to punish everyone for their sins. Dan Dukich’s sound design moodily enhances the locomotive theme.

The subtle genius of Kathy Kohl’s costumes is how they lend themselves to inspire the entire excellent large cast ensemble in their roles, some of which are crossgender in casting. The alpine village look, also smoothly unified through Stanley’s design, is like a faded storybook in its look. As if the denizens have never grown up. Stuck in a state of infantile solipsism. Michael Wangen’s dim lighting serves this irony as well. Ferrand’s gaudy outfit starkly screams in ravaged contrast with ultra-vibrant red hair topping off the unhinged hysteria that is actually permeating the town.

Forgiveness, redemption, and tenderness are concepts foreign to every character in The Visit, except perhaps for Anton. Durrenmatt refers to the book of I Corinthians 13 in the New Testament like a cry echoing on ears that will not hear. He isn’t indicting Christianity. He is indicting those who abandon its most benevolent tenets.