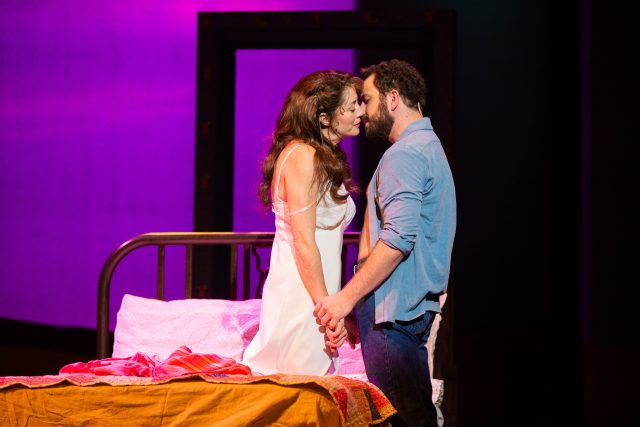 The Bridges of Madison County. Photo by Devon Cox

The Bridges of Madison County. Photo by Devon Cox

A few weeks ago, I published a piece which included eight shows to look out for in 2020. It was stiff competition, but there was absolutely no reason why The Bridges of Madison County, which is currently playing at Artistry, wouldn’t be on that list. Artistry continues to gain more and more momentum with their visually stunning and superbly cast productions. As a huge Meryl Streep fan, who starred in the movie version, I was excited to finally get a chance to see this show and hear the score that I heard so many positive things about.

The Bridges of Madison County takes place in a small town in Iowa. Francesca Johnson has made a home and a life in rural America after leaving her home in Italy as a young woman. She’s now married to her husband Bud Johnson and has two children, Michael and Carolyn. Her life is the same, day in and day out until her family goes to a state fair which leaves her home alone for a few days. Her life takes a twist after meeting Robert, a National Geographic photographer who is in town on assignment. As she begins seeing Robert more and more, she soon must make a difficult decision which includes a once-in-a-lifetime love.

Artistry has a fairly wide and deep stage, which is a huge advantage to them for many shows. I enjoyed that with this one, scenic designer Rick Polenek used the open space to his advantage. It never felt cluttered, the set was simple just like Iowa. It featured rolling set pieces to convey a few scenes as well as a backdrop featuring wide open spaces and hills of Iowa. However, very often it was just the open air of the stage which I loved. The show already lends such a gorgeous story that it doesn’t need an extravagant set. The scenery blends beautifully with Mike Kittel’s lighting design that fully captures the sun from when it sets and rises.

Director Benjamin McGovern has cast a group of performers that all perfectly incorporate the Americana and rural America vibe that this show brings. Some characters, for people outside of the Midwest, you’d think were caricatures, like Wendy Short-Hays who plays Marge, the nosey neighbor. This role specifically felt very Midwestern. I think we’ve all had that neighbor, maybe you were or are that neighbor, who spies on everyone with binoculars out from the front window. Short-Hays had the entire audience in stitches from familiarity.

I appreciated McGovern’s casting to even give many of the ensemble members multiple times to shine in various roles, like Becca Hart and Lydia Wagner, who each had solo musical moments that showed off their delightful voices. Ryan London Levin, who plays Michael Johnson, brought a nice amount of comedy to various scenes which helped the plot from getting too heavy. Levin also has such a wonderful and crisp tenor belt that I’m looking forward to seeing him in a leading role again soon. Alyson Enderle, who plays Carolyn Johnson, reminded me of Jodie Comer from the show Killing Eve. She had such comedic facial expressions that also helped keep the plot from getting too heavy for the whole time. Together they were comedic gold.

The production really comes alive with the addition of Jennifer Baldwin Peden as Francesca Johnson and Eric Morris as Robert Kincaid. Baldwin Peden has an angelic soprano voice that is such a nice change of pace from the big brassy belts that many of us see in musical theatre. It’s a nice reminder that soprano roles are important to musical theatre. Her ability to portray such emotions through her voice is masterful to watch. The soprano notes also meld so well with the boisterous and rich baritone voice that Eric Morris has.

Separate, they are fantastic but together they are electric. A basic thing I always remember about acting is that it’s all about listening and reacting, a simple lesson and yet many times we forget. These two leads have it nailed perfectly in each and every scene. Their romance is never rushed either, we see it blossom and slowly burn through each scene as it builds more and more. They also keep us guessing all the way to the end. I truly couldn’t figure out what decision Francesca would make. Often times we can really guess and figure out the rest of the plot by the beginning of the second act, however this one kept me guessing.

The Bridges of Madison County is nothing without the score that Jason Robert Brown wrote. As theatre critics, we often use the term “sweeping score”; however, there is no other way to describe it. The lush strings and full bodied music make this show so unique and one of a kind. It features songs that remind of us our beloved Minnesota State Fair, the hills of the Midwest and the love that we share for each other. It’s completely embodied in Americana culture.

The Bridges of Madison County is another triumph for Artistry. It’s surprising that it’s not produced more in the Twin Cities. Who knows when it’ll be produced again, which is all the more reason to rush out see it soon before it closes.