Even though Labor Day has passed, it doesn’t mean that patio season is over. As a producer for KSTP-TV’s Twin Cities Live, I have a monthly segment called “Worth the Trip”. I tally votes on Facebook as to what spots around Minnesota are worth visiting.

Earlier this summer, I asked for the best restaurant, brewery and winery patios and visited the top five. I met owners, chatted with customers, and learned why these places should be on your radar this fall. 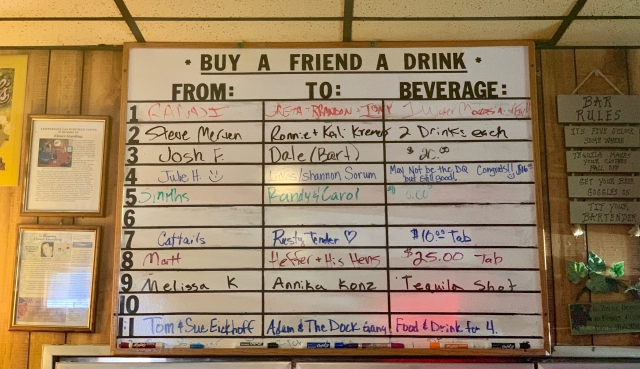 Pay it forward with a “Buy A Friend A Drink” board at Pearl Lake Lodge.

With a population of 20 people, Marty is about one hour northwest of the Twin Cities, near the city of Kimball. Marty is home to a church, a school, a town ball field, and the reason for my visit, Pearl Lake Lodge.

Pearl Lake Lodge originally opened in the 1920s. The back patio was finished in 2018.

Owner Tom “Rudy” Ruether showed me around, by first introducing me to what he calls the “wow door”. He calls it the “wow door” because once you walk through it and go out on the patio, all you will want to say is ‘wow’.

Rudy’s eclectic personality is visible through the wide array of items you will find on the patio. There is an Elvis statue, a British telephone booth, and a stoplight that’s upside down. Rudy tells me that all of his great ideas are stolen from other places.

The patio in the back of Pearl Lake Lodge seats 180 people. The restaurant also has a patio out front which fits another 50.

The patio has a music stage with tunes every Sunday, along with Wednesdays and most Saturdays.

Pearl Lake Lodge hosts one heck of a St. Patrick’s Day celebration. The town of 20 swells to 8,000 people with a parade boasting 110 floats and 1,000 participants. It takes about two-and-a-half hours to complete. Rudy calls it “the parade so nice you’ll see it twice” because the parade loops around the tiny town of Marty.

I fell in love with Pearl Lake Lodge’s “buy a friend a drink” board. Above the bar, you will see a whiteboard. You can buy someone a drink or food, and their name, along with what you purchased them, will show up on the board. Then when they stop by, they’ll see how you paid it forward. 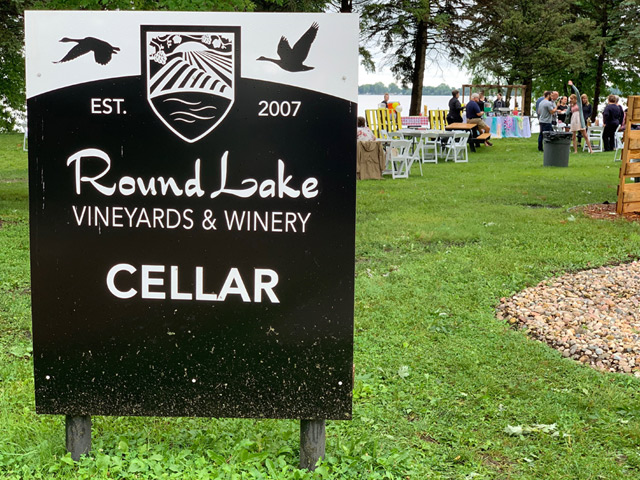 The patio at Round Lake Winery in southwestern Minnesota is one of the best in the state.

Round Lake Vineyards is more than three hours southwest of the Twin Cities. It’s a perfect stop if you’re planning a weekend getaway to Sioux Falls, South Dakota or Okoboji, Iowa. There’s a surprisingly high number of bed and breakfasts around Round Lake if you’re looking for a peaceful getaway.

If Round Lake sounds familiar, chances are you have seen their wines on liquor store shelves. Their wines are sold at over 300 locations around the Midwest. They started planting grapes in 2007 and began producing wines in 2012.

Their patio is worth the trip. On a Saturday or Sunday afternoon, it will have 150 to 200 people. They host live music on Sundays.

There are trees, a waterfall, and when you look up, you will get a view of Round Lake as the winery is located right on the shore.

What sets Round Lake Winery apart is that they have a chef on the property. Chef Brendan previously worked for Hilton Hotels and wanted a change of pace, so he decided to work at Round Lake. The food matches the quality of the wine.

Even in the winter, Round Lake is open five days a week. 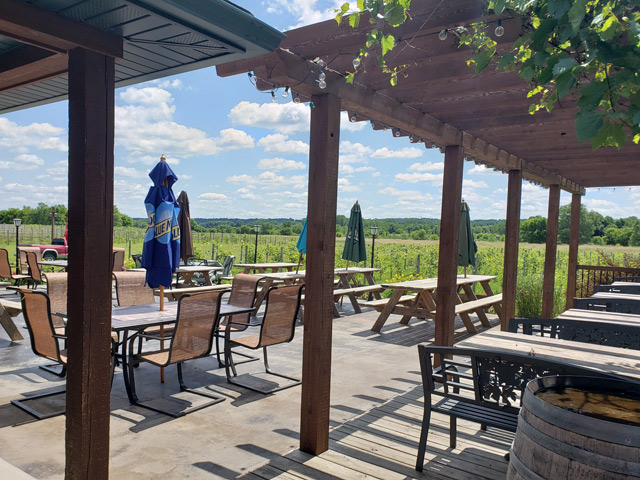 The city of Belview is about two-and-a-half hours west of Minneapolis between Montevideo and Redwood Falls, making it an achievable day trip from the Twin Cities.

In Belview, you will find Grandview Valley Winery, which opened in 2012. The winery, which at one point boasted more than 4,200 vines, sits on what once was a soybean field.

The patio, which seats about 100 people, is worth the drive. They feature live music about once a month, and you are able to order their made-from-scratch pizzas, which can be tailored to accommodate gluten-free diets.

When the harvest allows, Grandview Valley Winery’s nine wines are made from 100 percent Minnesota-grown grapes, with the exception of the Cabernet Sauvignon.

The spring of 2019 was tough for Grandview Valley Winery. The severe weather caused nearly every vine to die at the ground. However, the Winery is still operating.

They are open Thursdays through Sundays year-round. Make sure you have cash or a checkbook before you go; they do not take credit cards. 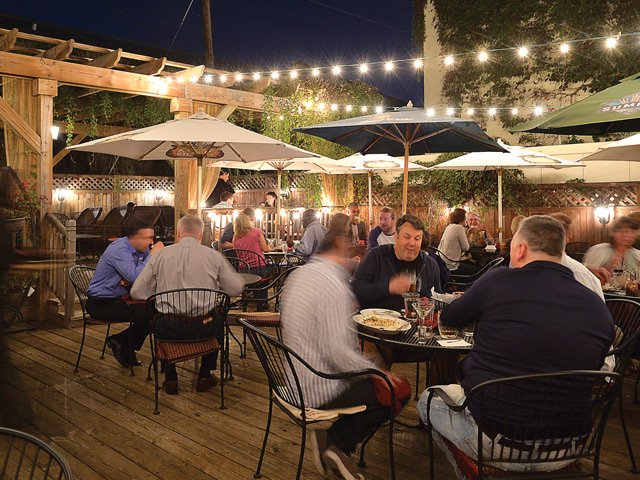 Moscow On The Hill has over 300 vodkas on their menu, including 19 which are infused in-house.

If you’re looking to enjoy a patio a bit closer to the Twin Cities, head to Moscow On the Hill in the Cathedral Hill neighborhood of Saint Paul. It’s home to one of the most hidden restaurant patios in Minnesota.

The now-Russian restaurant originally opened in 1994 as a French restaurant. They switched from French cuisine to Russian food a couple years later.

The patio cannot be seen from the street, and the buildings surrounding it block the street noise you get in the city.

The founder’s son, Eugene, tells me that if you want to avoid a wait for a table on the patio, you should stop by for lunch, which they serve seven days a week.

Moscow On The Hill is known for their 300-plus selections of vodka, including 19 that are infused in-house. Of the ones they make, Horseradish Vodka is the most popular. It goes great in a Bloody Mary. They serve a flight with six flavors of vodka for $20. Moscow On the Hill partners with 45th Parallel Distillery to sell their infused vodkas at liquor stores.

As for food, Eugene says you need to order the handmade dumplings: in particular, the Siberian Pelmeni, which are filled with beef and pork.

For the more adventurous eater, order the Yazik, which is beef tongue.

I was impressed with the vast number of gluten-free menu items available, which are clearly marked. 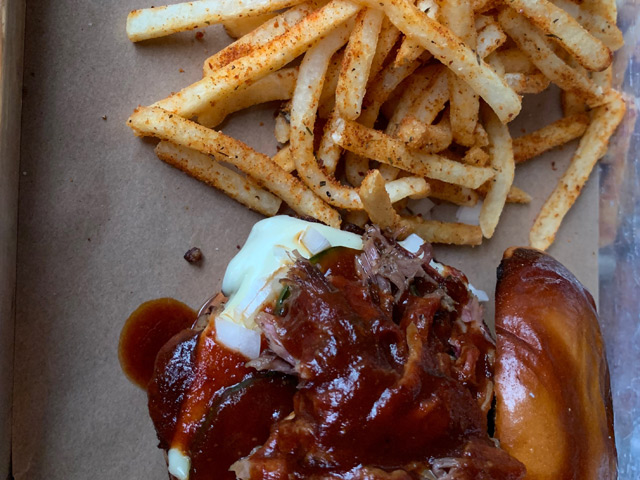 Surly has good beer, and their food is just as tasty, including this sandwich, which is a take on the McRib.

Surly Brewing Co. got its start in 2006 in Brooklyn Center. They added their Minneapolis facility in 2014 and produce beer at both spots.

The patio at the Minneapolis location fits 900 people. About 100 seats underneath an awning, closest to the restaurant, are full-service. Elsewhere, you are able to order food from Surly’s “Food Island”, a tent where you can order a vast majority of their menu. You will receive a text message when your food is ready.

And Surly’s food is far beyond average. Their Hog Frites are French fries topped with meat and veggies. They’re incredibly good. The Brussels sprouts, the smoked meats tray, and the key lime pie are good choices. Oh, the burger is tasty as well.

Surly’s second floor is home to a pizza pub. You are able to get pizza to go and bring that outside to the patio.

The patio (or beer garden) is dog-friendly, too. It does get busy, so Surly staff tell me that the best times to visit are between 11-11:30 a.m. and around 2 p.m. any day of the week if you want to avoid waiting.

Mike Marcotte can be seen on KSTP-TV’s Twin Cities Live. You can read more of his Minnesota guides on his website, www.givemethemike.com.