The Best City You Never Heard Of

I’m visiting the City of Design (touts UNESCO). The City of Culinary Delights (so say foodies). The Green Heart of Austria (proclaim locals). It’s the second-largest city in the land. It’s Graz. Who knew? But now the secret’s out. 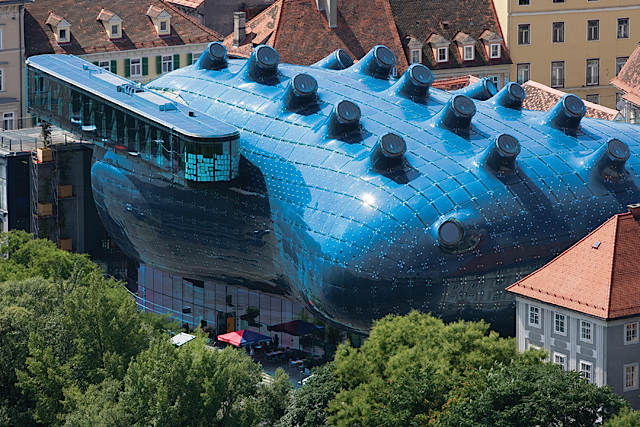 Kunsthaus Graz, or Graz Art Museum, was built as part of the European Capital of Culture celebrations in 2003 and has since become an architectural landmark in Graz, Austria. © Graz Tourismus – Harry Schiffer

While tourists flock to the Habsburgs’ stately Vienna and Salzburg’s Sound of Music, Graz lies under the radar (but not for long): a quasi-Mediterranean city with a whiff of Italy. A Tintoretto altarpiece is framed by the Italianate Baroque curls that inhabit its ornate edifices, and a sense of vivace fills the open-air market, though it’s the oil of local pumpkinseeds, not olives, they’re selling. The ornate Opera House it faces would feel at home across the border.

I’m staying in the Hotel zum Dom (“Oh, it’s famous!” gasped my taxi driver, winning me a notch of respect). This former palatial mansion stands list a missal’s throw from the Dom itself, the ebullient Cathedral of 1438. Supporting that City of Design accolade, there’s a crimson velvet settee aside my four-poster bed, with plush drapes to match. Oh, and culinary delights? In the sunny breakfast room, the deli spread rivals Dean & Deluca’s, plus all the cappuccino I can swallow.

Fortified, I head to the Dom, famed for its admonitory fresco, “The Plagues of God”: beware, or He’ll send locusts. And Turks. A few blocks farther, the Stadtpfarrkirche of 1439 displays that glorious Tintoretto. An equally brilliant modern stained glass window depicts Christ, mocked by unbelievers, including Hitler and Mussolini. Here and there around town, you’ll spy the tag of a past Emperor bragging, A-E-I-O-U (Austria Est Imperator of the Universe). 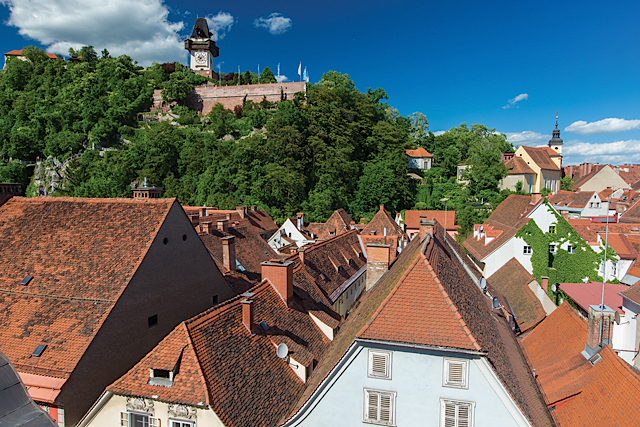 His castle is gone, however. But, where it once stood crowning Castle Hill, a clock tower remains. (Napoleon destroyed the rest, but was paid off to spare the town’s symbol.) Ascend to this pinnacle via countless (I stopped after 200) steps, built by Russian POWs, for a spectacular view of the red-tiled roofs below; or ascend via elevator within the mountain’s tunnel-cum-performance space.

Peering down, across the tumbling river, you’ll spot what appears to be a beached blue glass whale. It’s actually the beloved Friendly Alien, as townsfolk call their modern-art museum of 2003. Behind it, a once-dodgy neighborhood now harbors hipster shops (gotta-have jewelry, designer specs, artisan pottery, handbags of recycled webbing, and the rubber shoes I didn’t know I needed).

Crossing the river’s pedestrian bridge, which slices through a man-made mini-island sporting a trendy café, you’ll hit stylish Sackstrasse, an avenue anchored by K&O, Austria’s largest department store. Ride the escalator to floor six and its open-air café for a selfie overlooking those terra cotta rooftops. Back on the street looms the city’s most-visited attraction, the Landeszeughaus Armory (OK, it’s a guy thing), showcasing four floors of old-time weapons: swords, lances, muskets, pistols, helmets. “The bad news,” smirks my guide, “No knights’ armor. The good news,” he allows: “The largest collection in the world” — sort of the Goodwill Outlet — of outdated armor. 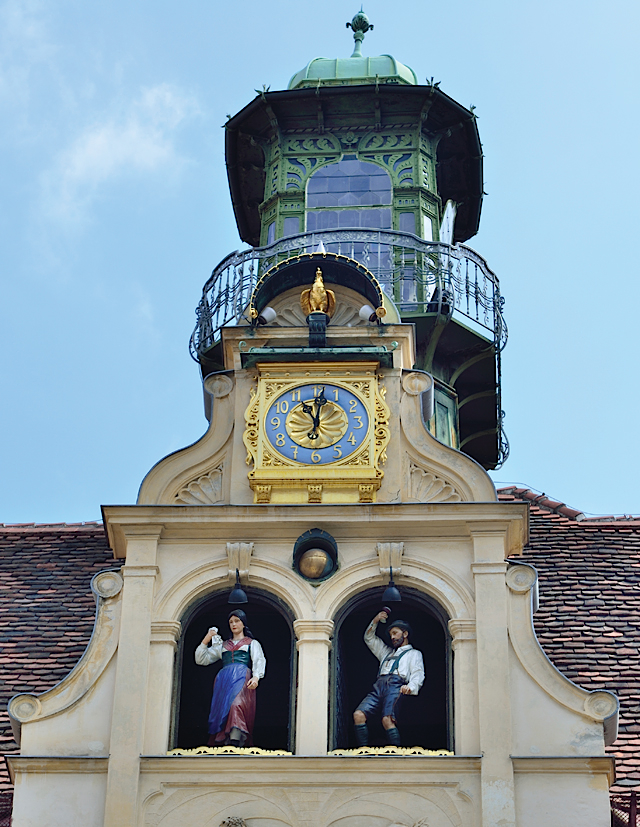 Near it, the museum of city history explains how Graz is different from rivals Salzburg and Vienna. Farther afield, the Joanneum Quarter sequesters a cache of underground collections below its concrete plaza. I favor the Neue Museum with its arresting meander through Austria’s recent art history, from Impressionism to Realism and the post-war Avant Garde.

By now, I’m salivating to pursue those culinary delights, and a grand place to start is Glockenspiel Square. First direct your eyes to the clock tower where, three times daily, a door opens and a figure of a farmer in lederhosen, hoisting a stein, dances around a dirndl’d lass forever waving her hankie. After a click of the camera, aim for the door of Glockenbräu below, a brewery-cum-eatery celebrating Styrian comfort food like krausflerl (cabbage and bacon tossed with pasta snippets) and its famed breaded-chicken salad, delivered by a weight-lift champ with four arm-long steins of beer in one fist, two platters in the other. By the time everybody clinks a “Prost!” it’s time for another round.

Cozy Altsteirische Schmankerlstube, near the armory, has been in business forever, enticing regulars with creamy garlic soup, roast pork with kraut and dumplings, wiener schnitzel — and, for dessert, pumpkinseed ice parfait. Eckstein, near my hotel, grafts modern touches to grandma’s classics: duck reimagined with oyster mushrooms, okra, and smoked peppers; “crunchy leg” of suckling pig and cabbage, spritzed with port wine and Champagne.

Inspired by a flute of the region’s sparking wine, at Gasthaus Steinzenbauer — a supermodel of gemuchlichkeit — we devoured an ample appetizer plate saluting Styrian beef in aspic; Styrian carpaccio with Austrian Parmesan; smoked local trout; and sheep cheese wrapped in bacon. Then, trout with asparagus risotto and the kitchen’s specialty, Styrian liver. Culinary delights to the max!

To get to the source, head for “the Green Heart of Austria” — the Thermenland countryside, emerald with forests, orchards and lilac blooms, past Maypoles trailing silky ribbons. An hour along winding roads, we find cars parked here, there, everywhere, and in a minute, the reason is clear: Zotter chocolate factory beckons. Indulge your inner Charlie on a multi-taste tour, sampling by countries of origin, percent of cacao, and degrees of roasting at over 100 tasting stations, including a hot chocolate bar. I’m but one of 260,000 annual visitors, ambling through its Edible Zoo, teaching kids where food comes from; past the Cemetery of Bad Ideas, starring chocolate flavor-flops like peanut butter/catsup. Other offbeat flavors still going strong: ham; fish with coconut; mango lassi. In the café we “Prost!” with flutes of the farm’s cider. 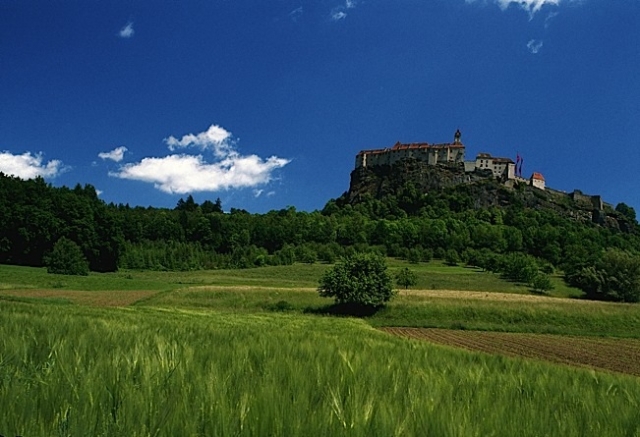 Then on to Castle Riegersburg, perched on a volcanic mountaintop — a never-conquered 12th-century fortress whose moat, today, is filled with grazing pigs. It houses three museums: weaponry; the ornate medieval rooms of its wealthy owner; and an expo of 16th-century witches, including one suspect lady who caused roses to bloom in winter. There’s a map, like a TV weather report, with arrows showing their flight paths (duck and cover).

Our escapade ends at Weingut Krispel, sipping the winery’s fruity rieslings and crisp sauvignon blancs at its May Day party, seduced by oompah bands and mountains of homey eats. Meet you there next May Day? Check out www.visitgraz.com to make it come true.