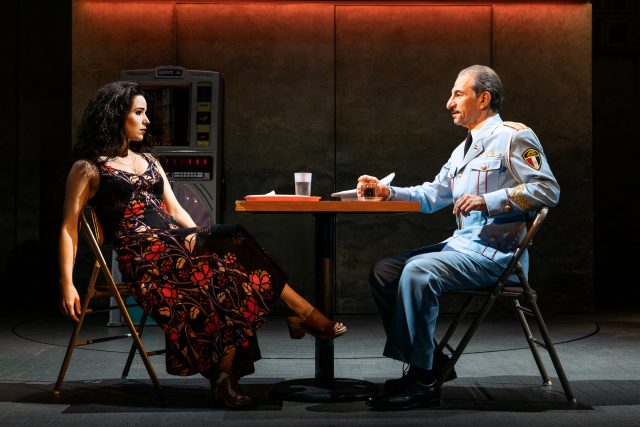 Chilina Kennedy and Sasson Gabay in "The Band's Visit". Photo by Matthew Murphy

Chilina Kennedy and Sasson Gabay in “The Band’s Visit”. Photo by Matthew Murphy

On June 10, 2018, the 72nd Tony Awards were set to recognize and award some of the biggest achievements in Broadway for the year of 2017-18. There were big blockbuster musicals nominated that year including Disney’s Frozen, Tina Fey’s Mean Girls and Nickelodeon’s SpongeBob SquarePants. How could a small musical based on an even smaller movie stand a chance? At the end of the award show, it was clear that The Band’s Visit was something special as it won 10 Tony Awards, including Best Actor, Actress and Musical. Since closed on Broadway, it’s now embarking on a National Tour and is currently in Minneapolis.

The Band’s Visit begins with the Alexandria Ceremonial Police Orchestra inside the Tel Aviv bus station in Israel. They are on their way to a concert in the city of Petah Tikvah; however, due to a miscommunication, they are sent to the isolated desert town of Bet Hatikva. After meeting some of the locals, including the cafe owner Dina, they realize they are stuck there for the night. The band splits up, staying with various friends of Dina’s, for the night and each encounter their own challenges with the locals but ultimately uniting under the power of music.

It isn’t often that I comment on the lighting of a show, however, I can’t help but mention the lovely work that Tyler Micoleau has designed. The show focuses on the sun and moon’s placement in the sky which seems so obvious, however I rarely feel like I see it. Micoleau uses this to his advantage to also help cast large shadows of the cast on the sides of buildings, which makes this show feel even more realistic. It feels so natural and realistic, you’d think we were in an outside theatre. The lighting and set, designed by Scott Pask, work together so beautifully that I had to squeeze in that mention.

What surprises so many about this show is how different it is compared to your usual musical. It doesn’t feature a bright intricate light show with glitzy costumes and intense dance breaks. The thing is, it doesn’t need them. It’s simple yet incredibly moving with a score that is culturally accurate and full of Middle Eastern sounds. It’s accompanied by a book that includes wit and dry sarcasm that mimics the dry weather they experience in Bet Hatikva. The humor that writer Itamar Moses brings is so unique, and also my favorite kind which sometimes is a little self-deprecating.

While the entire cast breathes such life on stage, I want to focus on the leading lady, Dina, who is played by Chilina Kennedy. Dina is a difficult role to play for many reasons. The first is that the actress who originated the role, Katrina Lenk, will forever be the shoes they need to fill. Lenk even won the Tony Award for Best Actress. I had the pleasure of seeing Lenk, and her performance was haunting and unlike anything I’ve ever seen. The second reason is that playing dry and sarcastic the entire time can be dull and turn off audience members quickly.

Kennedy is far from dull. Her delivery for each line and song were superb. The Band’s Visit utilizes silence so well throughout the show to the point where it’s almost awkward how long you’re sitting there waiting. However, Kennedy had the audience clinging to her waiting for the next line. She gives Dina a simple, uncaring facade; however, as the show plays out, we see her being a more complex character and wanting so much more. While Dina’s songs are not full of typical Broadway belts, it gives her the opportunity to truly craft a story within each song and Kennedy does so lovely including numbers like the musical’s standout songs “Omar Sharif” and “Something Different.”

That being said, the show’s cast is not what makes this production so beautiful to watch and experience: it’s the lyrics by David Yazbek, who also wrote the score. The story truly focuses on how music can bring people together, no matter what story you’re a part of, where you were born or what language you speak. Like most musicals, the plot is driven by the lyrics, however, something feels different with The Band’s Visit. It doesn’t feel so forced and formulaic. It’s refreshing and unique.

I remember the first time I saw this show I kept thinking, “What is this about and what’s the point?” It didn’t hit me until the song “Something Different”, when Dina sings about how every day she would stare to the west and the south, looking for miles and yet nothing has changed. One of the last lyrics she sings is, “Nothing is as beautiful as something that you don’t expect”, and I hold true that those lyrics embody the entire show. Her life was the same day in and day out, until the Band showed up. As Tewfiq sings a song in Arabic, to which Dina cannot understand, she’s still entranced. The music, his singing and arm movements, she still cannot keep her eyes off him.

I’ll be honest, The Band’s Visit is not for everyone. If you’re going to a musical because you want to see giant numbers, huge dance scenes and sparkly costumes, then I’ll be blunt and say this isn’t for you. However, if you see theatre because it moves your soul and you enjoy the stories they weave, then I cannot stress enough what a lovely time you’ll have. The Band’s Visit is a show that may never be revived, or available to theatres to purchase the rights which is why this may be your only chance.