The Autumn of the Matriarch – “Awake and Sing!” Astounds at Artistry 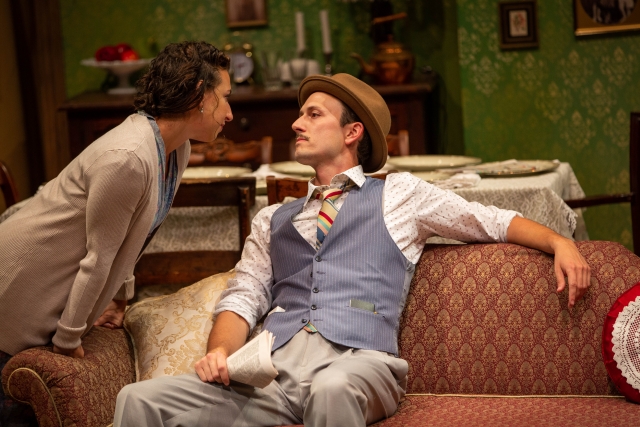 The riveting Kate Guentzel crackles in a dangerously uncompromising performance as Bessie Berger, a matriarch of a poor New York Jewish family who has cracked the whip far, far, far too much on her loved ones who live under her roof. In Artistry Theater’s astounding revival of Clifford Odets’s revered 1935 drama Awake and Sing! the philosophical struggle between altruism, individualism, and the existential need to attain a livable income are thrashed out with several complexly written characters of three generations in a play with lots of moving parts. Director Benjamin McGovern masterfully synchronizes these parts in a production that is gritty, confrontational, and exquisite. 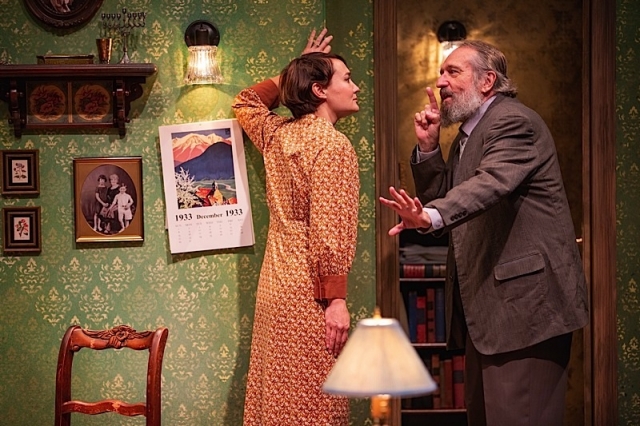 Middle-aged Bessie’s nearly pathological fear of poverty has been unconsciously and unintentionally reinforced by her ageing Marxist father, Jacob (Charles Numrich). She has undermined her son Ralph (Ryan London Levin) and daughter, Hennie (Miriam Schwartz), both in their 20s. Ralph ought to be free to strike out on his own and create a future with a woman he’s falling in love with but aside from having to sleep on the family sofa in the tiny family apartment, his confident vitality, so crucial for a young man of his station to have intact, is constantly under siege by her. What may have once been a well meant effort by Bessie to toughen him up for the big bad world ahead, has imperceptibly shifted into ceaseless humiliation. 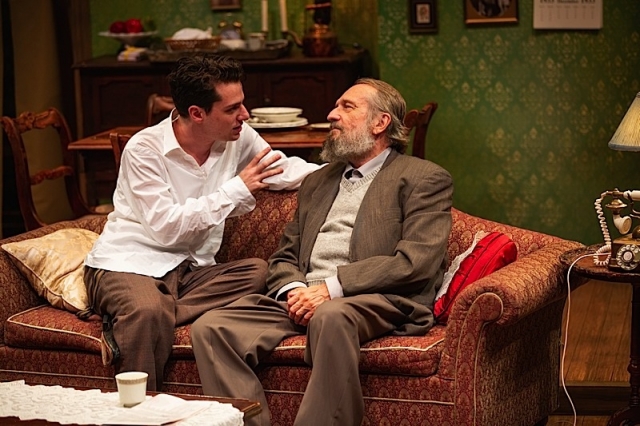 However, Ralph has absorbed his grandfather’s views in a more positive way than his mother has. (In her defense, it’s legitimate to grasp that idealism taken to extremes doesn’t pay the bills. But when this becomes obsessive, the results are damaging when inflicted long-term on the young and vulnerable.) Like many a young man in classic American literature, Ralph is repulsed at living for just monetary and material gain. He prefigures Biff, the restless son in Arthur Miller’s Death of a Salesman, a major play in the following 1940s decade.

Hennie has been severely affected—pummeled with cruel and absurdly unrealistic pressures by Bessie to marry a wealthy man. When she is impregnated out of wedlock, hell hath no psychic fury like her mother’s wrath. As an audience member one actually feels something like a collective emotional wave among the actors on stage as Guentzel wields her character’s shaming impulse upon discovering Hennie’s conditon. She’s terrifying. And there are points when Schwartz literally seems as if she is suffocating. Chilling. 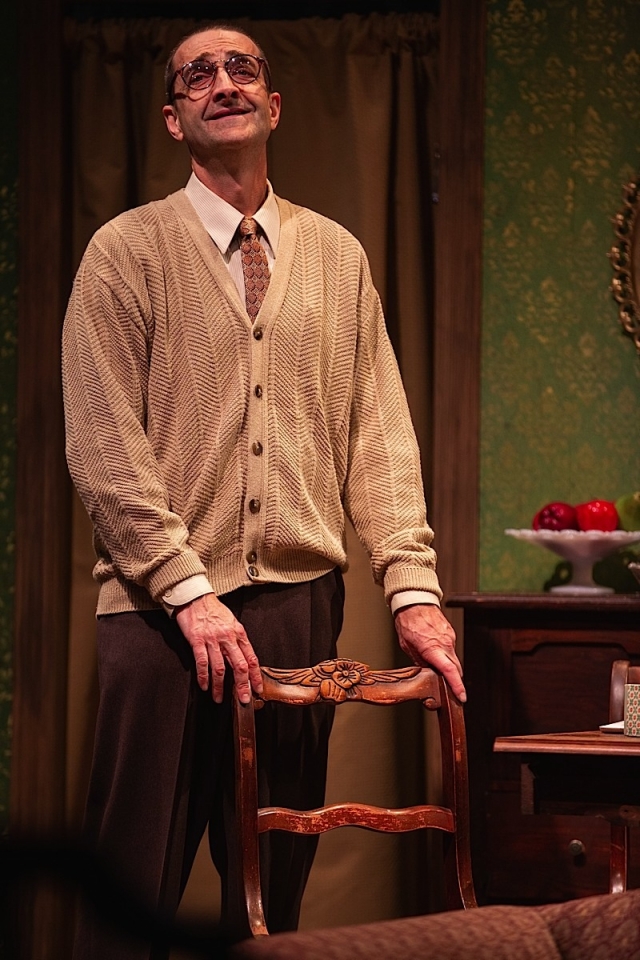 The most tragic figure is husband-father, Myron (Jon Andrew Hegge), who has failed to intercede in his wife’s chronic long-time mental-emotional abuse of their children. This, of course, is rooted in his own cowardly lack of self-respect, having never stood up to the woman. He retreats into nostalgia about Teddy Roosevelt’s myth of rugged individualism which permeated the America of his youth. But the Great Depression has manifested into Myron’s own personal depression. We are made to consider how we may use the difficulties that make the headlines in the time we live as an excuse to not take our life into our own hands and shape it toward betterment. Hegge’s portrayal is devastating.

Odets is generally celebrated by the Marxist-inclined but Awake and Sing! is not so cut and dry. Jacob rants “This is a house? Marx said it. Abolish such families!” As dissonant as this family is, his words ring harsh, like a cryptic utopian solution. Not helpful and not admitting that it was the other family members not addressing their emotional issues. Communism is noted for its demand to remake the world and obliterate the primary institutions of family and religion with the delusion that that will solve all problems. The devoted atheism of Bolshevism (an interchangeable term for revolutionary communism commonly used at the time), which Jacob seems to honor at such points, is also upended when he quotes from the Old Testament book of Isaiah from which the play’s title comes. Odets understands that human beings are complex. 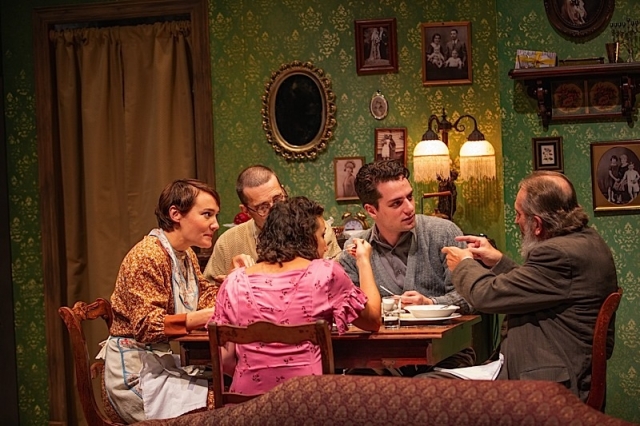 In McGovern’s impeccably timed, paced, and nuanced interpretation, his penetrating actors, every single one, make us aware of the opposing life views among their roles. There is not one single “Jewish” viewpoint. A poignantly memorable Numrich vocally embodies Jacob’s leftist-driven identity uncannily. Ideological histrionics that merged with the inner self in Jacob’s formative years now comprise the total man. It could be a case for the much debated idea that personality is largely constructed.

In stark contrast, embittered neighbor Moe, a disabled veteran, is rather ruthlessly committed to ill-gotten gains from gambling and other rackets. He counters Jacob’s altruism quite convincingly at points even though he periodically shifts into ferociously grotesque mean-spiritedness. His fierce realism is unsettling but totally understandable. Having lost a leg in World War I, he does what he feels he has been thrown to do—to supplement his meager veteran benefit with criminal gains. But it’s impossible not to admire his pluck. These dimensions are glisteningly rendered by actor Paul Rutledge. 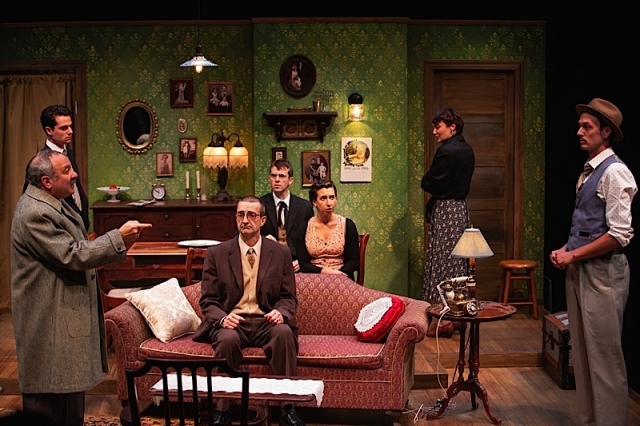 A similar offset occurs, less excusable, with rich brother Morty (a manipulatively convivial Howard Held in a vivid performance) who touts what left-leaners would call the standard capitalist line: that money creates economic opportunity and that his business success proves that. However, as legitimate as this view can be in many cases, we suspect Morty turns a blind eye to the needs of his employees, his family, and his own compulsion to exploit others. Odets shrewdly contextualizes the economic abuse complaint in the form of Morty, rather than in the much more sympathetic Moe, a man seen in the eyes of Jacob as a victim of capitalism’s foreign wars.

That said, Jacob fails to acknowledge black markets that Communist countries would come to be known for in the 20th century, as well as the bloody Russian Revolution that brought down the Czarist aristocracy in 1917-18 and the Soviet genocide contemporaneously occurring in the decade wherein Odets sets Awake and Sing!. One of the USSR’s early reigns of terror was the “Holodomor” of 1932, a Soviet man-made famine which essentially mass murdered over seven million in the Ukraine. Communism’s proverbial Five Year Plans and the gulag prison system, which by the way, victimized gays, among countless others, is something that is too often ignored. 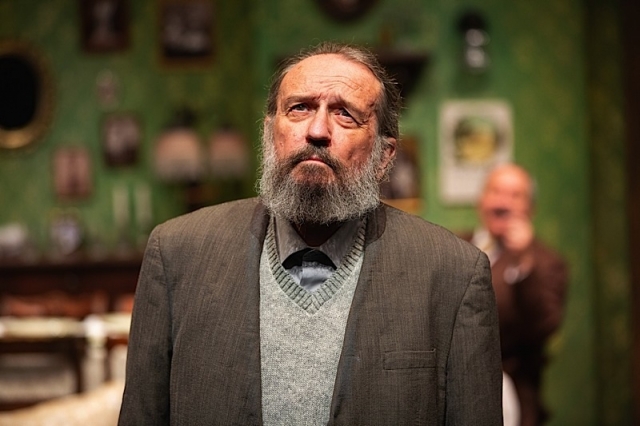 However, in the midst of these clashes of values in the Berger home, a love triangle organically emerges between Hennie, Moe, and Sam, the apparent father of Hennie’s baby and an immigrant stigmatized by his broken English. Schwartz and Rutledge beautifully infuse their characters’ interplay with a real sense of physical attraction and resentment.  It’s intriguing to witness this pair’s Love/Hate relationship. Consider that society has a dehumanizing general assumption that disabled people are not sexual, much less, erotically desirable. Moreover, this is how Odets wrote it and is not some post-Sexual Revolution gimmick made to make Artistry’s revival more relevant to our supposedly less erotophobic era. This is actually what Odets intended.

Corey DiNardo’s Sam is absolutely endearing. Because his cultural lens prevents him from deciphering the emotions swirling between them, he is at a cruel disadvantage. Through it all, Sam is devoted to wife and child and DiNardo is quite touching in relating that.

The beating heart of the play is Ralph, soulfully realized by Levin. Some of his passages grope and reach toward freedom from his smothering mother and to be with the woman Bessie has nastily kept him from by not informing him of the woman’s attempts to reach him by the home’s single phone. Ralph has committed the sin, in his mother’s eyes, of falling for someone who has been orphaned. She has no assets. This woman is not actually seen on stage because of Bessie’s intimidating nature, so even the audience is kept from seeing her. Ralph yearns for the right to love. He also yearns to be an individual with free will, the opposite view of his loving grandpa’s collectivist ethos. Paradoxically, Ralph is still the apple of Jacob’s eye. The two actors’ mutual chemistry is heartwarmingly natural.

Some of Ralph’s lines presage passages from two future great plays and a future great film. For example: when the dead Emily in Thornton Wilder’s Our Town speaks from beyond the grave in anguished yearning that she and her family never expressed their love to one another; Tom, the frustrated son of controlling mother, Amanda, in Tennessee Williams’s The Glass Menagerie, who rails against how she is killing his spirit and his desire to advance in the world as an artist with her incessant guilt-tripping; and in Woody Allen’s Interiors, daughter Joey played by Mary Beth Hurt, unloads her volcanic emotions on her domineering mother, Eve, played by Geraldine Page, to catastrophic effect. 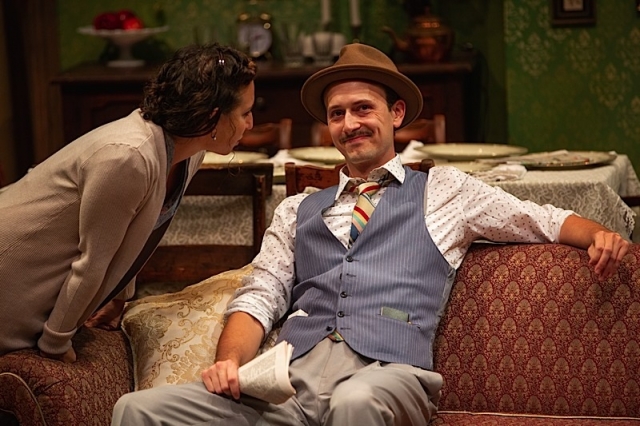 Bessie is written as a woman whose cynicism has destroyed her. She is so far gone that she insults men on their looks to their face, thinking nothing of it. She destroys a precious keepsake with no sense of how monstrous her action is. Think Bertolt Brecht’s Mother Courage or the mother in Barry Jenkins and Tarell Alvin McCraney’s Moonlight. However, I found one unexpected moving moment when Guentzel goes to a jar to fetch a few coins. Very sad. A glimpse of the poor little girl she once was. It is emblematic of how the woman has had to scrape by, probably since day one, in a time in an era defined by mass poverty. Indeed, we can be defined by our time. I’ve never seen Guentzel deliver as superb performance as she does in Awake and Sing!

Kate Phillips’s fittingly claustrophobic set with its brown and tones and intricately selected props perfectly aligns with an humble abode one would have seen in the Depression era. It is seamlessly matched with Sonya Berlovitz’s observant working class costume design. C. Andrew Mayer’s sound design nicely captures music from Judaic traditions. Keely Wolter’s excellent dialect coaching hones the vocal realm of the immigrant influences of a Jewish Bronx household of the time. Artistry Theater lives up to its name.