The Agony & the Ecstasy: Why We Love “Jersey Boys” – – now back on stage at the Orpheum 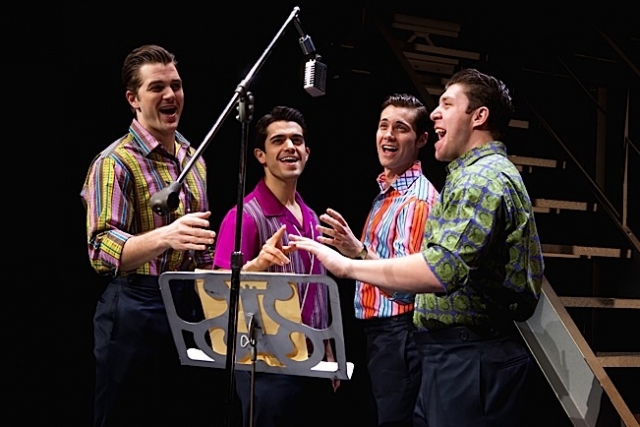 The current national tour of Jersey Boys is looking as triumphant as ever at the Orpheum Theatre. The true-life story musical about the quartet, Frankie Valli & the Four Seasons, glistens with four splendidly sung and dramatically nuanced performances plus a fabulously flamboyant one. All are sharply timed, brightly humorous, and deeply reflective of the 1950s working class. We feel the forces that young men in a New Jersey industrial town are up against and how they shape and misshape their personal character as the decades roll onward. Bob Gaudio’s music, Bob Crewe’s lyrics, and Ron Melrose’s arrangements beautifully frame something far beyond your typical jukebox revue.

Book co-writers, Marshall Brickman (of Woody Allen and Dick Cavett fame) and Rick Elice give the piece a powerful spine. The presence of an insidious underground economy harangues the youths well into adulthood. The desperate desire to get out of the yoke that binds one to debt is searingly portrayed. The sometimes coarse and graphic language is not overused. It reflects the gritty world of struggle “the boys” are hitched to. 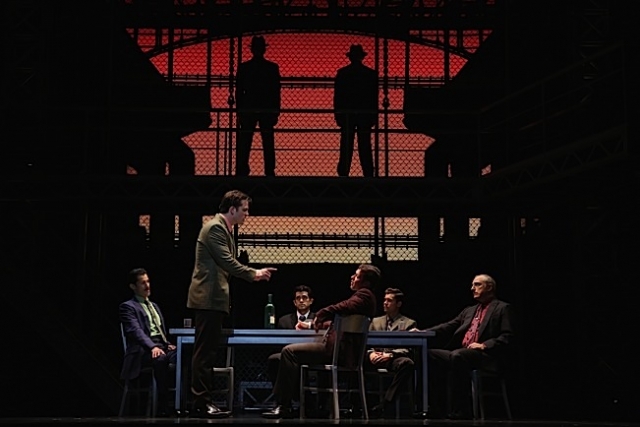 Moreover, the musical deftly portrays the maddening ways the music industry did and does still exploit both innocent and mature talent and in the process, often will degrade and destroy that talent. Parasitical desk-sitters and influential dj’s, smugly, arrogantly, and stupidly mock a musician’s serious endeavors. This culminates in the overwhelming Can’t Take My Eyes Off of You segment.

At the Orpheum the director Des McAnuff’s cast vivifies the realities of Brickman and Elise to riveting effect. It would be easy to coast on broadly drawn characterizations framed by beloved classic rock. But these actors give there all and then some.

Hayden Milanes as Frankie brings an ingenious balance between delicacy and a powerful sense of masculinity beneath the surface. Drew Seeley as Bob Gaudio truthfully embodies the charmed kid whose evolved family allowed his talent to bloom naturally. He is immunized against the decadence so prominent in the music circuit. He will not be thwarted. 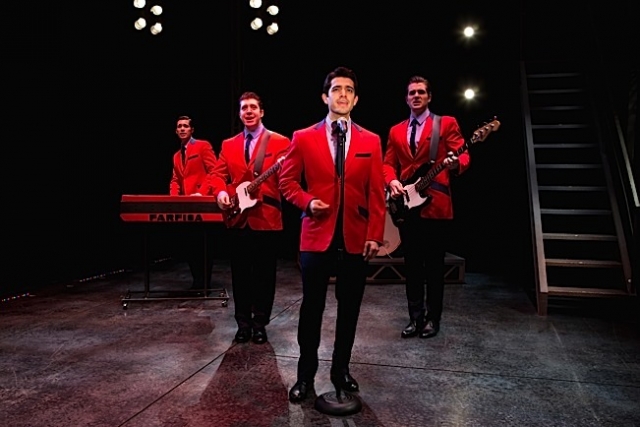 The dynamic Matthew Dailey as manager Tommy DeVito digs into the man’s controlling second nature. It’s a vibrant and maddening evocation of the alpha male. Keith Hines plays Nick Massi. Hines is remarkable in that he emanates charisma and star quality but he never overpowers the others. Hines is an actor first. He portrays the wages of loyalty in a way that will make any thoughtful audience member relate. This is one of the musical’s most confrontational themes: to what degree does loyalty lead to self-deception and even self-destruction.