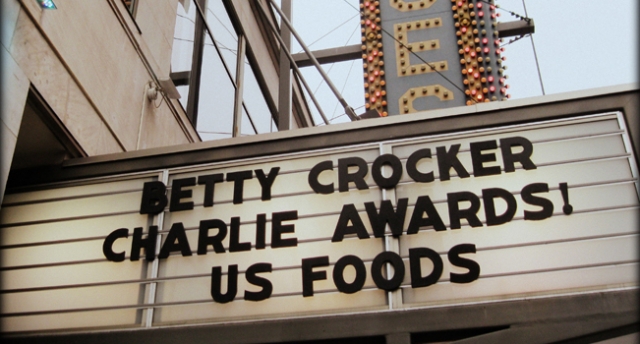 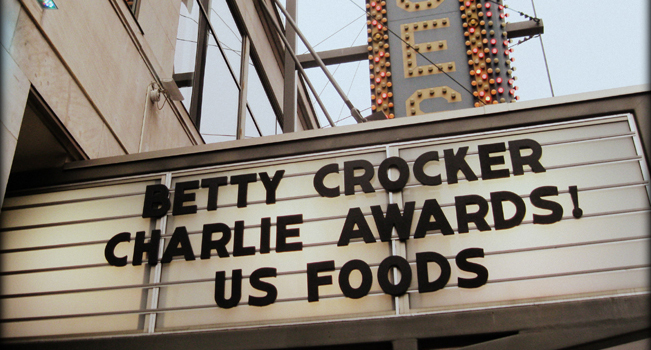 An awards event can truly wield the power to bring a community closer together and the 2012 Charlie Awards did just that. Despite the fact that the very nature of an award is to spark a best-of-the-best style competition, when the dust cleared and the few were left victoriously holding their custom-designed awards plates, the others stood back and applauded them. In the end, everybody is in it because they love and are proud of what they do…and what they all do is food.

The Charlie Awards are the Twin Cities’ premiere (and probably only) food awards. It’s like our very own Academy Awards of food. If you haven’t heard of it, don’t worry; the event is only in its second year and so far it isn’t exactly promoted in a way that’s conducive to supporting a major event like this. Despite the fact that it has a ton of media backing, it just hasn’t been able to make the prominent name for itself that it should be able to.

I did not attend the awards last year, but after hearing rumblings in the underground about a less-than-amazing event, I was nervous about what I might be walking into. I can honestly say that I was truly happy to find that it turned out to be an exciting time that was a lot of fun. From an outsider’s perspective, it feels as though maybe some lessons had been learned after last year and hopefully that trend will continue on in the years to come. After all, growth is rooted in learning. 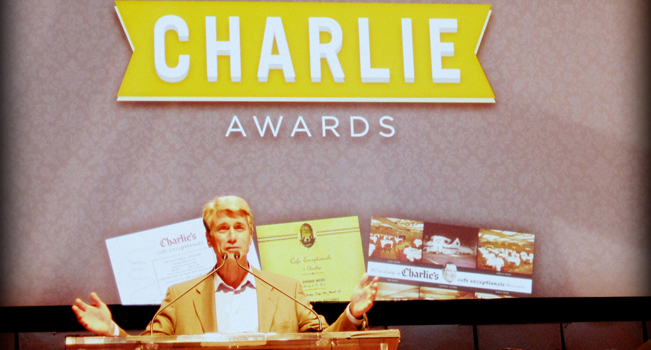 One of the main ideas behind the Charlie Awards is that restaurants go online and submit their best dish. Then online followers can go to the site and vote for which dish they think deserves to win. The dish with the most votes wins the prize. It’s a fairly simple process. There are also several other categories which are not voted upon but are decided by a professional panel of voters. These categories include the awards for “Outstanding Service,” “Outstanding Chef,” Outstanding Restaurant,” and so on.

The previous year’s winners, in addition to local celebrities and other notable industry people, present the awards to the sometimes-fledgling victors. Some of the key presenters this year included the likes of Minneapolis Mayor R.T. Rybak and St. Paul Mayor Chris Coleman. Chef Tim McKee presented the award to Chef Doug Flicker for “Outstanding Chef” (the title earned by McKee last year), then, Chef Flicker–who was last year’s recipient of the “Outstanding Restaurant” award–presented that same award to Chef Steven Brown for his Linden Hills restaurant, Tilia. ::breath:: 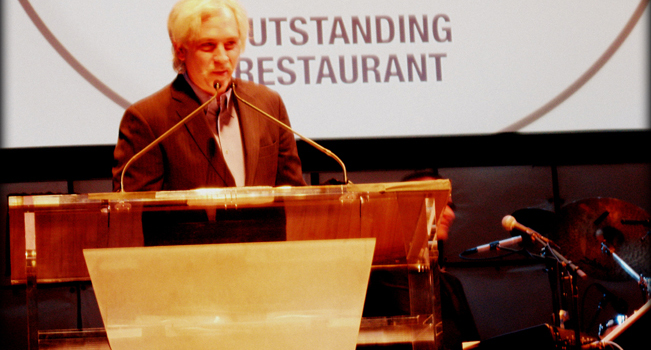 Some folks making ground this year included the duo behind the popular food truck Hola Arepa. Christina Nguyen and Birk Grudem won Charlies for their slow roasted pork arepa and for being outstanding “emerging food professionals.” The team made Charlie Awards history for being the first location to receive multiple awards in one year and they thanked the crowd by issuing an adorably meek, “Thanks mutha f*cka’s,” before walking off the stage. The only thing that would’ve made the acceptance even better would’ve been a mic drop. ::boom::

Congratulations to the both of them! 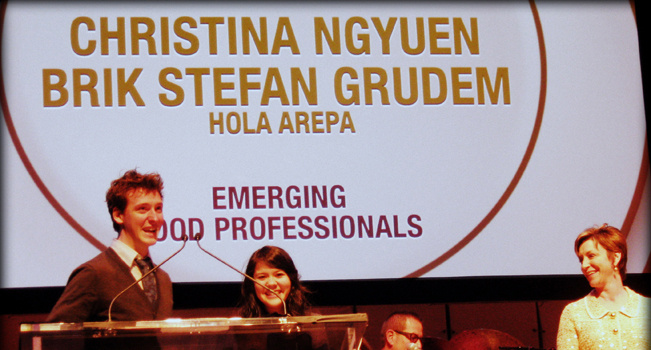 Other winners included Summit Brewing for their release of Summit Saga IPA in the local craft brew category, Cahoots Coffee won for their Moroccan Mocha in the outstanding cup of coffee category, Brenda Langton (owner of downtown’s Spoonriver) won the community hero award, and Chef/Owner Russel Klein of Meritage and his wife/co-owner took home the award for outstanding customer service. Chef Lenny Russo of St. Paul’s Heartland restaurant took home the lifetime achievement award for his many years of dedication and service to the food industry in the Twin Cities. 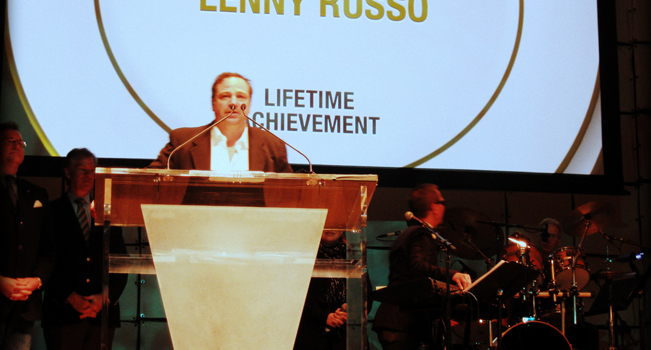 We’d be sad if we couldn’t say that the Charlie Awards didn’t bring out not only the finest talent the local industry has to offer, but also the most fashionable. Whereas “most outstandingly dressed” isn’t yet a category for the Charlie Awards, we’d like to nominate a few names for next year should they decide to add it to the roster. First of all, honorable mentions will go to La Belle Vie’s Bill Summerville for rocking the terrifically dapper look and Butcher & the Boar Chef Jack Riebel (unfortunately not pictured) for teaching us what a bow tie is all about. Runner up goes to outstanding pastry chef winner Michelle Gayer from the Salty Tart for seriously rocking the leopard print in all the right ways and the winner, hands down, goes to La Belle Vie’s main barkeep, head of the Northstar Bartender’s Guild and recipient of the outstanding bartender award, Johnny Michaels. Johnny rocks the leather like few can and accepted his award sporting a purple leather coat, grey jeans and a green undershirt. Truly fabulous. 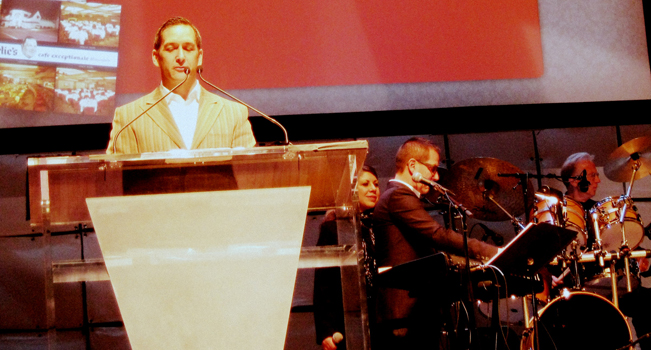 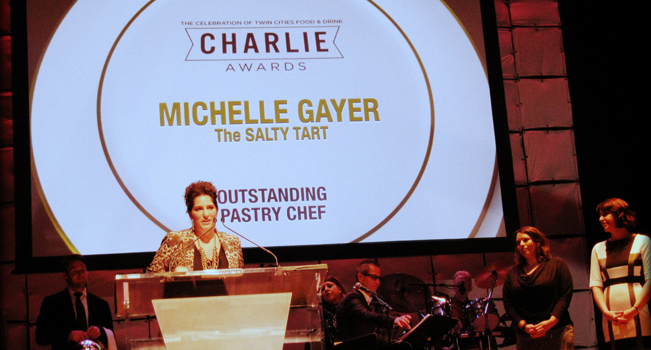 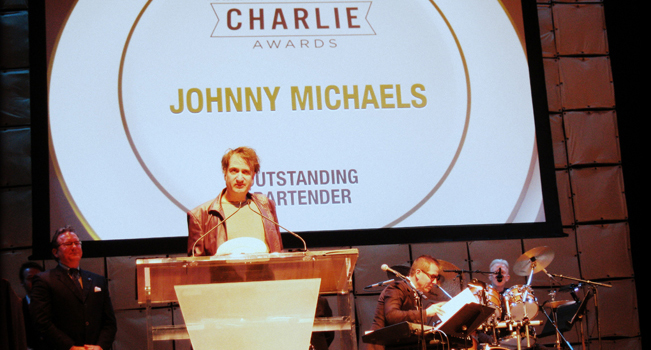 Hopefully next year we’ll see some better promotions surrounding the Charlies in order to help gain more support from the greater community at large. Whereas many restaurants have embraced the awards (a few award recipients even got a little emotional), it can only be sustained through greater community support.  Whereas the Charlie Awards may not be perfect just yet, they’re well on their way to becoming a true Twin Cities establishment. I for one wish them well and hope that they continue on in pursuit of the best food and talent that the Twin Cities has to offer.