The 12 Minnesota State Fair Foods You Need to Eat 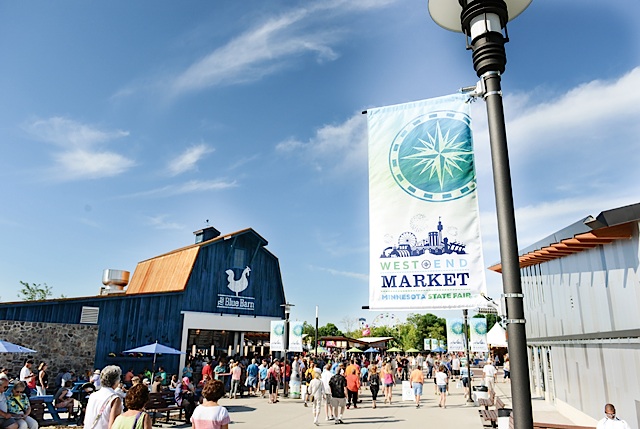 2017 marks my 28th consecutive year attending the Minnesota State Fair. I’m obsessed. For the last 12 years (soon to be 13), I have worked at the Great Minnesota Get Together representing my daytime employer. And with that, I’ve had plenty of time to eat my way around the Fairgrounds.

This food list goes beyond the cheese curds, Pronto Pups, and Sweet Martha’s cookies. There’s much more to consume. Because the Fair runs for 12 days, here are 12 foods that are a bit more off the beaten path and worth seeking out. 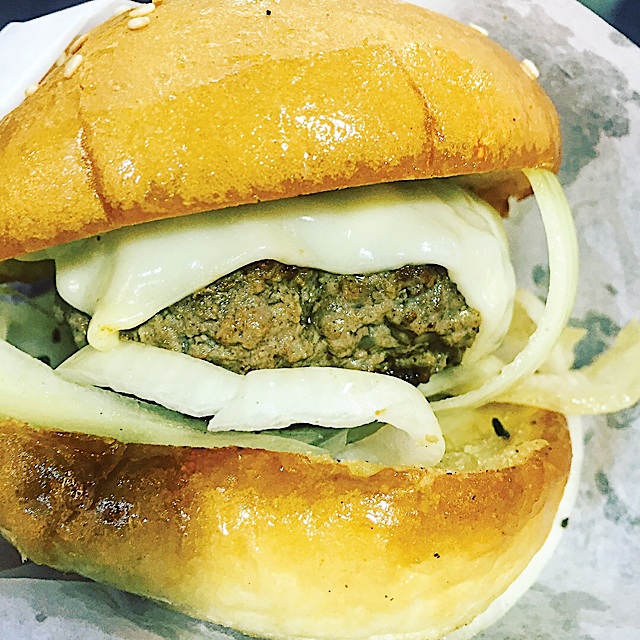 Wild Rice Cheeseburger
The wild rice cheeseburger is the first food I’ll eat on the first day of the Fair, and it’ll be the last food I’ll grab on my way out. It’s made on the spot with a big hamburger patty combined with cooked wild rice (not too noticeable, actually), and served up with cheese, onions (worth adding those on, no extra cost), and, obviously, a fair amount of grease. The bun is no-frills, but it doesn’t need to be special. Don’t mess with perfection. This delight is available at Wild Rice Confections; you’ll find them in the crowded Food Building. Pro tip: enter in a side door you’ll find on Cooper St. across from the Bandshell—it’ll save you a sweaty trip walking through the building. Before hopping in line, check your Blue Ribbon Bargain Book to find a coupon to save you a dollar or two.

Mint Milkshake
Whether it’s in malt or shake form, there are many spots around the Fairgrounds to get some ice cream. The Kiwanis are up in the north and down at the south end, you have the Dairy Goodness Bar in the Dairy Building (formerly Empire Commons), Sadie’s near the DNR fish pond (their malts are incredibly good), and the Dairy Bar attached to the Cattle Barn. That’s where you’ll find a mint-flavored milkshake, which is definitely worth the walk. If you’re a fan of the Shamrock Shake at McDonald’s, this mint milkshake is a must. It’s a refreshing change after a day full of fried food.

Deep-fried Cookie Dough
I’m sticking with sweet for an unsung hero at the State Fair. There’s deep-fried cookie dough, folks, and it’s a bit of a hidden gem. It’s just one item on the menu of a booth in the Food Building serving up gluten-free corn dogs and spiral potatoes, so you need to know it’s there. You’ll get three balls of dough on a stick, and you’ll be good after eating one (or maybe half of one). It’s a great item to share. 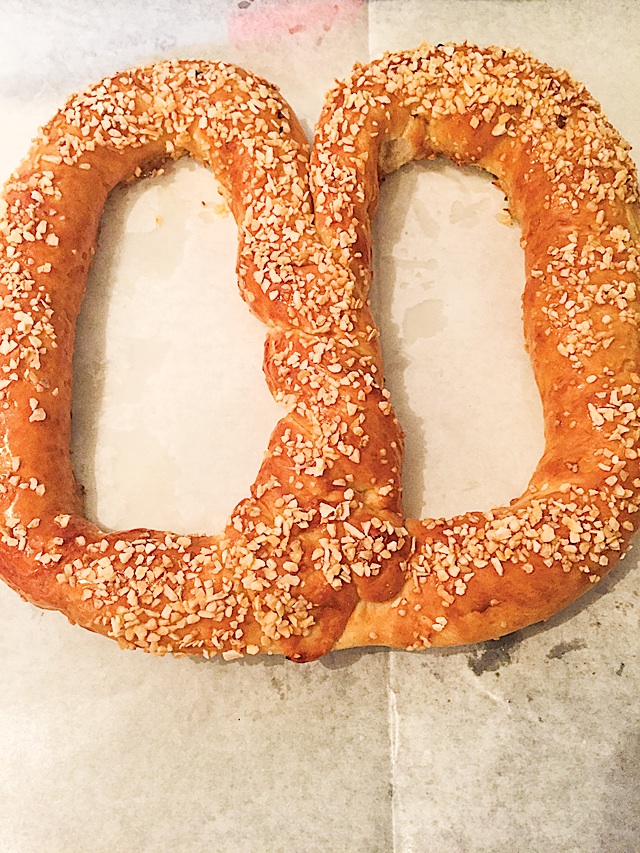 A Pretzel. Photo by Mike Marcotte

A Pretzel. Wait, What?
Yep, a pretzel made my list and it’s another hidden gem. Available at a stand-alone booth on Liggett St. between Carnes and Judson, these giant pretzels come a wide array of flavors, are doughy and warm, and are huge. Get the cinnamon sugar. Warning: although delicious, the garlic pretzel had garlic pouring out of every pore in my body for days. 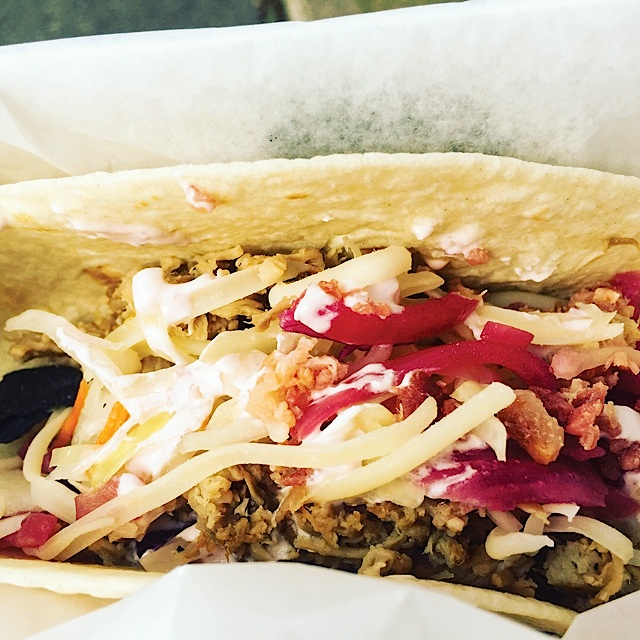 Oslo Taco
The 2016 State Fair was the first time I had an Oslo Taco from Shanghaied Henri’s located on the outside of the International Bazaar. It’s smoked pulled pork, Norwegian cheese, a cabbage slaw, bacon bits, and a lingonberry relish sour cream. It’s really good.

The Pickle Dog
Okay, you could make a pickle dog at home with some Carl Buddig sliced meat, a pickle spear, and some cream cheese. But there’s something unique about the Pickle Dogs being served up at the entrance of the Midway on Carnes. Perhaps it’s the quality pastrami they’re using. Maybe it’s the friendly Minnesota staff working the booth (the owner is from Sebeka). It doesn’t matter. They give your stomach a break from the grease. They have a Fire Dog version with peppers along with a Reuben Dog adding sauerkraut and thousand island dressing. I would stick with the original.

Deep-fried Pickles
So, I hated pickles as a kid. I would peel them off of hamburgers. But alas, here we are with two pickle-based picks. The deep-fried pickles at The Perfect Pickle (formerly The Preferred Pickle) are fantastic and won the People’s Choice Award during the 2016 State Fair. They come in a variety of flavors, too: choose from original, cajun, or a third kind stuffed with cream cheese. All come with a healthy side of ranch dressing. 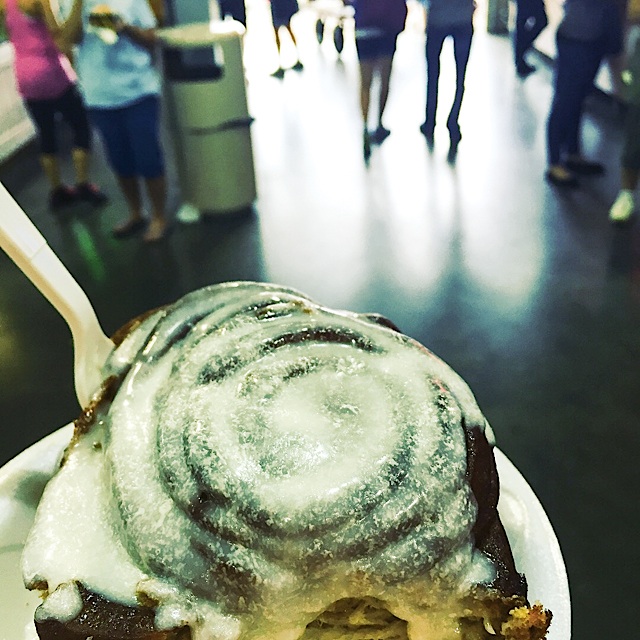 Cinnamon Roll
Back to the Food Building for another food you could easily make at home. The cinnamon rolls sold in there are huge, gooey, and cheap ($4.50). Bring a friend to tackle this one.

Wine Slushy
Okay, you gotta wash all this food down with something. There’s a wine slushy booth tucked away in the back of the crepe stand on Carnes near Ye Old Mill. Again, it’s a booth that you have to know is there—it even took me some time to find it. The price seems steep at first (about $9) but it’s a perfect way to cool down on a hot day at the Fair.

Beergarita
The Beergarita has been poured at the Fair for years, but I continually meet people who have never had it. The concept is simple: mix a margarita with beer. The beer dilutes the sweetness of the margarita, and the froth of both is plenty refreshing. You’ll find them at the Tejas booth inside The Garden at Dan Patch and Underwood.

Chicken in the Waffle
Restaurant owner Steph Shimp (The Longfellow Grill, The Lowry, The Freehouse, Bottle Rocket, Mercury Room) has something special going at her State Fair spot, The Blue Barn. Their menu is creative. In 2017, they’re introducing two new foods: one, waffle fries with sliced peppers and bacon piled on top with a black diamond truffle oil mayonnaise, and two, a breakfast bake with eggs, roasted chicken, and chorizo topped with salsa, lettuce, and pickled red onion. The food I’ve come to love at The Blue Barn is called Chicken in the Waffle. It’s a version of chicken and waffles perfect for walking around the State Fair, with chicken and gravy poured into a waffle cone.

All-you-can-drink Chocolate Milk
All the milk you can drink for $2? It’s still a steal. And it supports Minnesota farmers. Oh, it’s even more awesome because it’s served on tap. Find it at the corner of Judson and Clough.

The Gizmo
Deep-fried Twinkies (better than you would think)
Candied BLT from The Blue Barn
The Peg Muffin from The Peg, the State Fair’s only full-service restaurant