But not that long ago, locals would be shuddering, “Huh?” Main Street was the domain of drunks and crooks and prostitutes. Its renovation started when some foresighted city fathers squeezed the avenue from four lands to two, freeing footage for generous sidewalk promenades filled with greenery, inviting benches and decorative lamps. A vanguard restaurateur opened a café there, “where nobody was going to go”—but they did. And others followed. 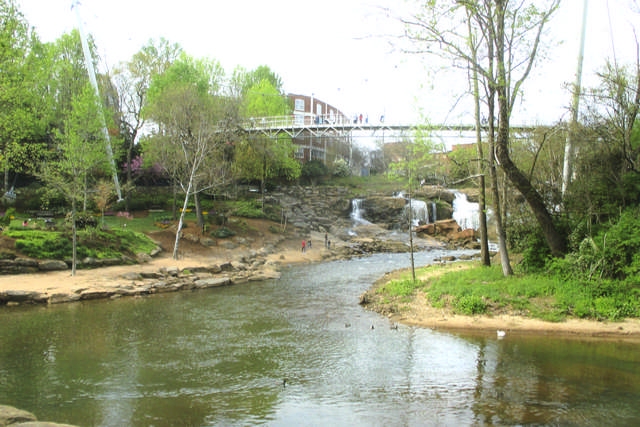 On the northern end of the corridor, a plaza was carved out for free musical performances, anchored by a new hotel. Further south, the approach to the Reedy River—called Rainbow Reedy by locals in tribute to its chemical content—was cleaned up, and a bridge that hid its magnificent waterfall came down, to be replaced elsewhere by a graceful walking/biking version.

On one bank of the rippling waterway arose the Peace Center for Performing Arts and its fountain-filled plaza, and on the other, half a dozen artists’ studios—because the city fathers believed in a master plan in which art made a better draw than dreary warehouses. (Today the downtown spotlights 70 outdoor artworks, with an explanatory app.) Even the rinky-dink ballpark was reimagined, drawing crowds even further south along Main. A free trolley further encourages exploring, as the town of 70,000 evolved into a model city. Yeah, that Greenville. 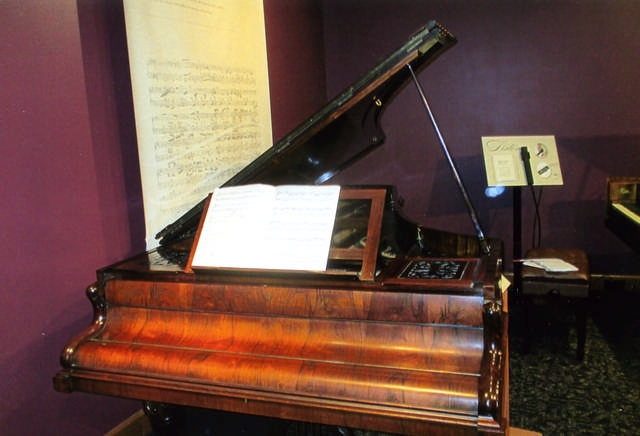 A piano once played by Chopin is part of the collection of the Carolina Music Museum in Greenville.

Its centerpiece, Falls Park on the Reedy, hosts acres of fiercely blooming pansies, snowdrops, and flowering trees amid grassy hillsides dotted with swinging chairs, where officious ducks parade past teens in formal wear taking graduation photos. Jump on the Swamp Rabbit Trail that follows the water for 20-some miles, or peek into those studios at Art Crossing— especially if it’s a First Friday, when vino flows as freely as the river. 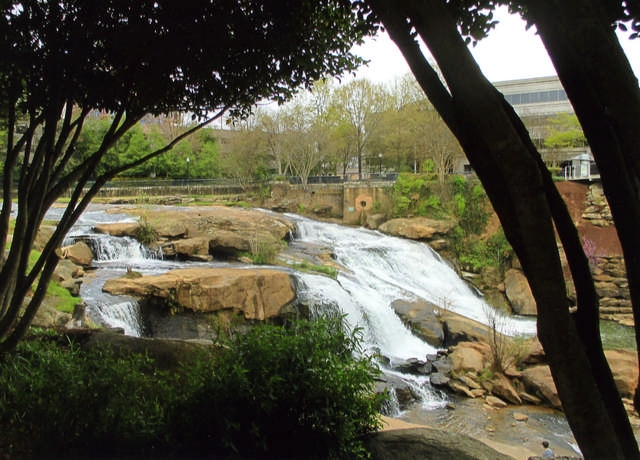 Continue a few blocks to the cemetery where General Robert E. Lee’s statue stands guard over scores of flags marking the graves of the Confederate dead. Just beyond lies Heritage Green, an anchor for more arts. Greenville County Museum of Art sports a vast collection of works by Jasper Johns, “the world’s most acclaimed living artist” according to materials on the state’s favorite son, along with the world’s largest collection of the meticulous watercolors of Andrew Wyeth. (Why here, I had to ask. Appears the painter was a favorite of a local collector, who donated the treasure trove.) Southern regional artists’ work is showcased, too.

Move on to the Carolina Music Museum, featuring 33 antique keyboard instruments, many with listening stations, including the 1845 piano played by Chopin and the oldest Steinway in the world. The1825 Schenz features a pedal which adds ringing bells and drum beats to its tunes. Big hit: a square piano of 1790, discovered in the Fifties serving as a wall of a chicken coop.

The Upcountry History Museum traces local lore starting with the squabbles between the Cherokee and Catawba tribes, on through the state’s secession from the Union in 1860 and the Civil Rights movement of the ’60s, where the segregated airport was scene of a protest, as was the march of black students on the whites-only public library. 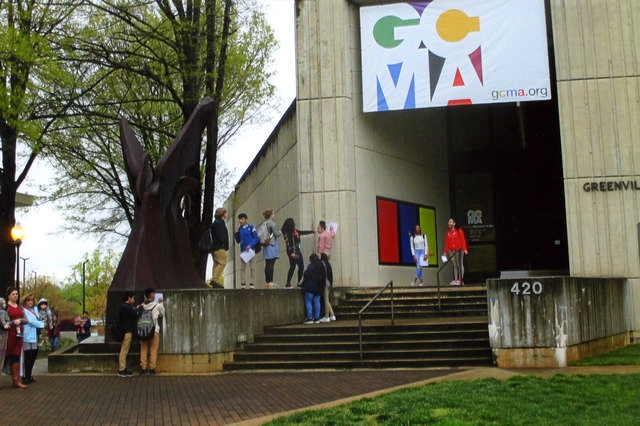 Greenville is home to the Greenville County Museum of Art.

You’ll find another view of times past at the Museum of Confederate History with its cache of Confederate money, weapons, uniforms, flags, letters home and precious photos, plus vials for collecting tears shed over absent soldiers. Shudder at wartime surgical instruments, including a bullet probe, amputation kit and glass eye. There’s a doll used to smuggle morphine to the troops. And handouts deriding Lincoln’s perfidy. Then catch your breath at Joe’s Place around the corner, an intriguing bookstore offering coffee and wine “paired perfectly with our books.”

That’ll hold you till dinner. Then head for Soby’s, that restaurant debuting on seedy Main Street 22 years ago and still going strong. It’s an outpost of genteel Southern cooking, from fried green tomatoes with blackened haricots and spicy pimento cheese to its signature she-crab soup, sweet and meaty, and crab cakes garnished with maque chou (corn, Southern style) and remoulade. Or the shrimp & grits. Or fried Carolina chicken served, in a stroke of genius, with mac & cheese.

Further along Main, you’ll discover Persian food at its finest at Pomegranate, revered by locals (and moi) for its complimentary starter of feta, mint leaves, unsalted butter and pita. Add appetizers like spinach, creamy with yogurt and livened with garlic, or a rich and smoky blend of eggplant and tomatoes. Then choose a kebab or lamb—you can’t go wrong with either rack or shank—followed by Persian ice cream studded with pistachios, saffron and a splash of rose water.

Cross the street to the riverside red umbrellas of Passerelle to dine in view of that mighty waterfall. I devoured an arugula salad studded with roasted squash, candied walnuts and ricotta, then more lamb, followed by a deliriously delicious coconut cake. Start the day at Maple Street Biscuit Company for a treat the size of a softball, or grab brunch at Nosedive, featuring a grits bar and biscuits and gravy.

Or! Hungry for barbecue? Just follow me. First stop, almost in the shadow of the airport for those who just can’t wait (including your truly), is Bacon Bros. At this farm-to-table kitchen, the pork is cured onsite, then served with homemade sauces—mustard and vinegar—and sides both classic (collard greens) and trendy (walnut-studded Brussels sprouts).

Having polled the town’s Uber drivers, café servers, restaurant patrons and hotel clerks, I next headed to everyone’s Number One choice, Henry’s Smokehouse. The size of a gas station, you’ll be guided to the short-order counter by its heady aroma, then nudged to choose between ribs, brisket and burnt ends. Sides here included the Southern classic Brunswick stew and best-selling sweet, sweet, sweet potatoes further sweetened with pecans. Wear a ball cap and you’ll blend right in.

No caps—okay, not many—at Smoke on the Water, described to me as “among the best in town but expensive”—which translates to their famous pulled pork for $7.95, served right beside the river or in dark booths indoors. Continue further down Main to another insider recommendation, Mac’s, where outdoor picnic tables come with free sides of smoky perfume and plates of hush puppies. Go for the brisket if you’re wise. Sauces range from wonderful to excellent. Servers all sport tattoos. Even easier: Sign up at the Tourist Office on Main for Saturday BBQ tours to three sites: Henry’s, Bucky’s and Mike & Jeff’s. Your diet doesn’t start till you’re back on the plane.

To discover that Greenville, check out www.visitGreenvilleSC.