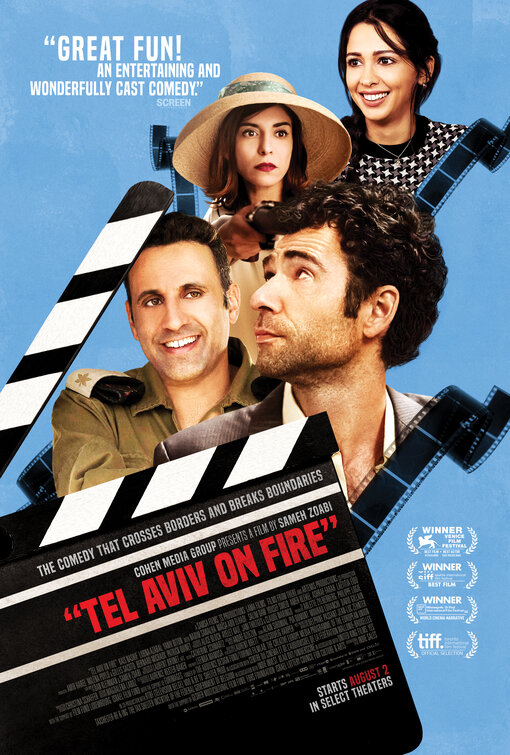 Two genres of what in this day and age can be called comedy, are played in the splendidly imaginative Israeli film, Tel Aviv on Fire. Two plot lines are realized in two styles that crisscross beautifully. The primary story is seen through the eyes of Salam (Kais Nashif), a Palestinian television writer of a series titled Tel Aviv on Fire. The conflict of the film itself is launched through the harassment inherent in the Israeli checkpoint system, where Assi (Yaniv Biton), an Israeli army commander, coerces Salam to write the series’s romantic relationship to reflect a more pro-Israel, pro-military view. This is a truly unique way to start an artistic collaboration and it makes for terrific comedic and dramatic tension throughout.  Assi coerces Salam because he wants to use what is written in the script as an ace up his sleeve to ingratiate himself to his wife, who watches the series religiously. In his estimation, the better the Israeli general in the film comes off, the better he comes off in her eyes.

Both characters reflect not only two very different political viewpoints but two very different codes of what it is to be a man. Moreover, both are actually very likable, though clearly Assi is abusing his power. Nonetheless, thanks to Salam’s nimbly pragmatic approach to his new writing career, Tel Aviv on Fire, both the film and the television series, blossoms into unpredictable twists and turns, meant to serve both men and the women they want to impress.
The audience sees the fully naturalistic dimension of the lives of the television artists and of those in Assi’s life. Director/co-writer Sameh Zoabi and co-writer Dan Kleinman show us that ordinary people in natural day-to-day interaction can be very, very funny. In contrast, the series’s new episodes co-written by the Salam character, are played in melodramatic form, which in the eyes of today’s audience, is perceived as satire. Therefore, a double-comedy-genre is masterfully achieved in one film.
Tel Aviv on Fire reminds us that we’re all human beings and that people from two extremely different walks of life can sometimes find ways to work things out. The television series, which is set on the eve of the Six Day Arab-Israeli War of 1967, logically has very a different look than the naturalistic style of the television production characters and the characters in Assi’s real life. The series has a rosy kind of glow to it and it bursts with color and corny romance. Both genres play off each other delightfully.
Nashif and Biton both give wonderful performances among a cast that is first-rate throughout.
Tel Aviv on Fire
Edina Cinema, 3911 W. 50th St., Edina
(952) 920-8796
www.landmarktheatres.com