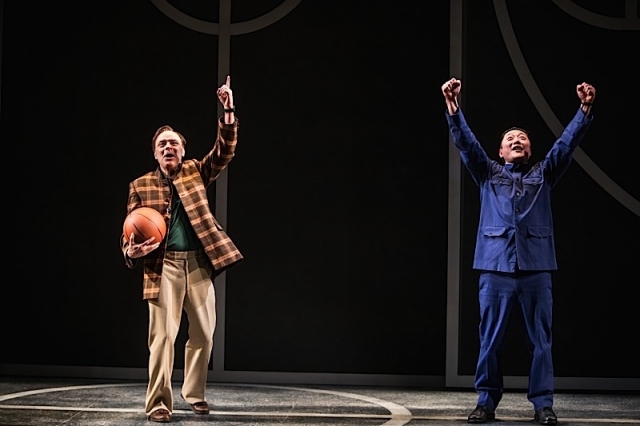 Lauren Yee’s comedy-drama The Great Leap, now in a luminous production at the Guthrie Theater, does indeed leap back and forth between the year before President Nixon made his historic trip to China, 1971, and the year of the Tiananmen Square protests and massacre in 1989. The number of civilians killed by the military has been disputed. Some records say as low as 180, while others estimate over 10,000.

In 1971 the systemic degradation and atrocities of the Cultural Revolution were still at play. Chairman and Madame Mao’s dehumanizing re-education programs, their “progressive” five year plans, and totalitarian concentration of government power had mass murdered, broken and brainwashed countless human spirits, and catapulted at breakneck speed the onslaught of mass industrialization, while rupturing agricultural traditions. 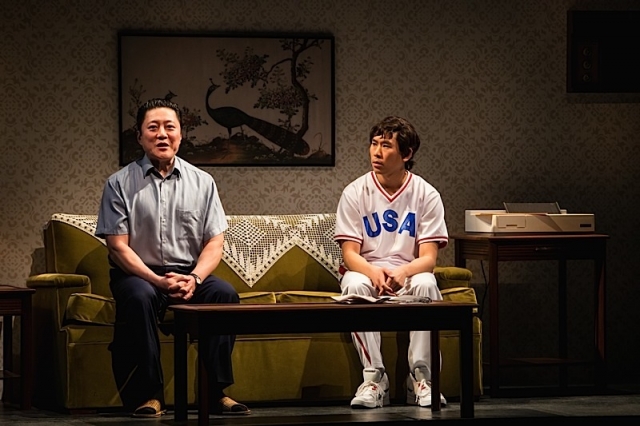 In 1978 the much more reform-oriented Deng Xiapong was appointed China’s Chairman of the Communist Party two years after Mao’s death. But some of his progressive notions, among them the One-Child policy, failed to create utopia, and culminated into vast social unrest by 1989.

Unfortunately, in 1989 the power structure had still maintained its grip on China. The approaching 1991 collapse of the Soviet Union to the north and west further spooked the Marxist-Leninist dream and Xiapong’s regime logically doubled down. The Tiananmen Square bloodbath was a consequence of that. 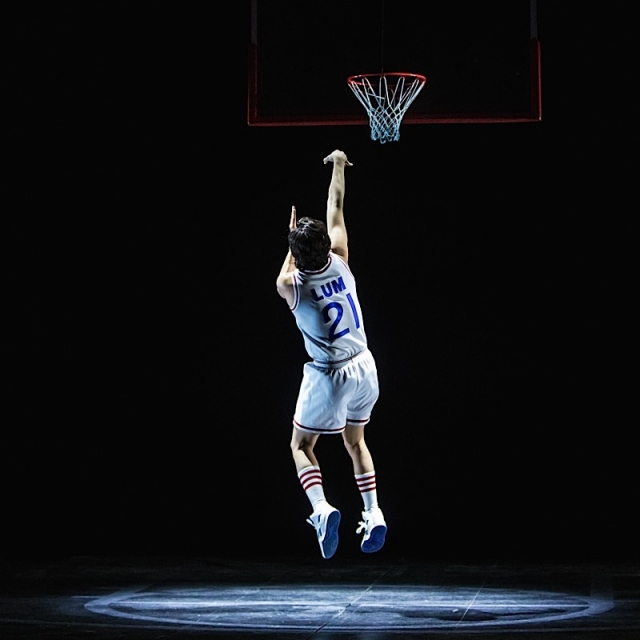 Yee has ingeniously woven the story of Manford (a dynamically vital Lawrence Kao), the mercurial teenaged son of a woman who fled to the U.S. in the Mao era. He seems to have a calling to get a spot on the adult basketball team representing the U.S. at a “friendship” match in Beijing in 1989. We learn that Manford’s mother has died shortly before the play begins and that in her lifetime, she vigorously urged him to go outside and shoot hoops. This he gladly did. Hence, he would become one of the great high school basketball players in the Bay Area. Even professionals are familiar with this prowess.

The career of Saul (a caustically likeable Lee Sellars), the coach of the American team slated to go to Beijing in 1989, has nosedived, along with his family life. Yee, who obviously has a great ear for speech patterns and style, has bravely and quite credibly written him as a crude but exceptionally effective man who uses offensive racial and sexual (including homophobic) slurs that will offend speech-policing liberals as well as terms sure to offend puritanical conservatives. But we root for Saul anyway and realize he is a reflection of the sports culture of the time and not an indication of a sordid personality. The playwright’s male characterizations are remarkable. The males in her play are flawed but she understands they are all three basically good. Yee’s perception in this area brings to mind the memorably complex representations of men from a major female playwright of another era – Lillian Hellman. 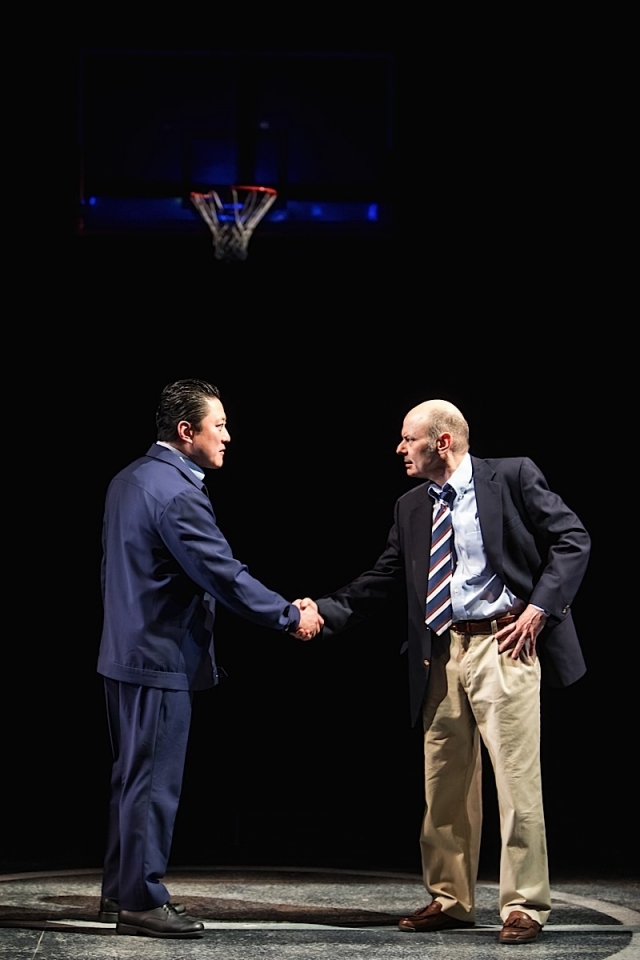 The scenes that shift back to 1971 relate Saul’s previous and first time in Beijing. He was invited by the Maoist power elite to impart the western approach to young Chinese players. At this point basketball was the only western sport not banned by the Communist Party. Saul’s interpreter, Wen Chang (a magnificently contained Kurt Kwan), is bemused and confused by the American’s vulgarity. Nonetheless, he takes it all in dutiful stride. Unwittingly, in the process of fulfilling his duty of conveying the visitor’s advice to the players in Chinese, Wen Chang has essentially been mentored on coaching by Saul, the world class Yankee expert. Therefore, the seeds are planted for the unsuspecting mentor to become a master himself.

Director Desdemona Chiang has minimalistically staged The Great Leap with performances utterly sparkling at points with swiftly sharp comedic timing, in contrast with equally piercing dramatic segments. Moreover, her spare visual stage compositions are as exquisite as the compelling portrayals she has elicited. This is clear evidence of a truly exceptional stage director. 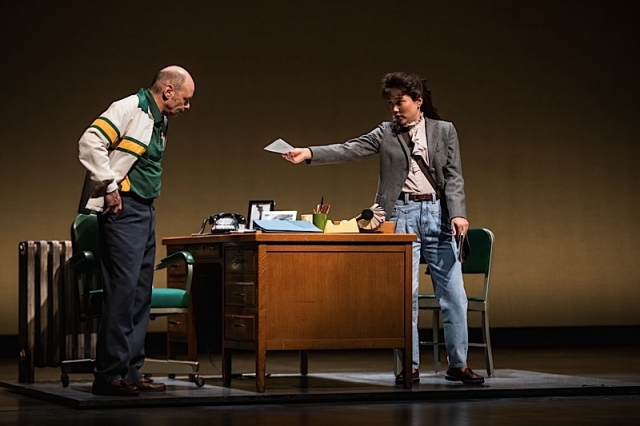 Within this visual scheme Chiang’s smashing quartet of actors also includes a winningly lovable turn by Leah Anderson as Connie, a young woman who might be called Manford’s guardian angel in human form. For those who have followed the gifted Kwan’s acting career, this is certainly an outstanding performance within his impressive body of work.

Note: The play draws its title from was a major socio-economic campaign that Mao Zedong and the Communist Party of China set up from 1958 to 1962 to aggressively remake the vast agricultural society into a collectivist one driven by industrialization. This campaign was called “The Great Leap Forward”. Unsurprisingly, such a grandiose plan couldn’t possibly have been achieved in a five year period. Chillingly, 31 years later, as The Great Leap play implies, that socialist ideal remains disastrously illusory. Today, a generally similar debacle is unfolding in Venezuela. If you get to the Guthrie early, have a read of dramaturg Jo Holcomb’s fine program notes.