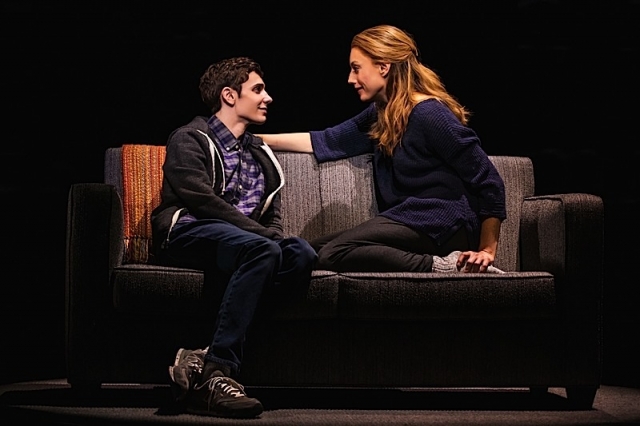 Dear Evan Hansen hurls the Broadway musical into the 21st century with disarming power and beauty. Like digital stardust. Steven Levenson’s book and its songs by Benj Pasek and Justin Paul have ingeniously analyzed what has frankly become cliche and steeped in sociological Zero-Tolerance mumbo-jumbo: high school teen alienation. Their fresh look gives an unsettling view of what teens are up against in the social network era when arbitrary referees like Facebook and Google digitalize, and in a larger sense, monopolize human interaction. If you are middle-aged or older, take my word for it, Dear Evan Hansen has insights and observations that are relevant to you. Its national tour currently plays in what is by and large, glorious production at the Orpheum Theatre with dazzling projections by Peter Nigrini—projections that serve the story rather than usurping it.

Dear Evan Hansen centers on Evan (Stephen Christopher Anthony), a high school boy who fabricates a story about a classmate from a wealthy family named Connor (Marrick Smith) who committed suicide. He recurs at points as spirit/conscience figure and one wonders to what degree he may actually be evolving in the after life. It should noted that the Connor portrayal is not of the same manufactured virtual portrayals that we see in questionable films like Her or plays like Marjorie Prime. Connor is a spiritual figure, the kind of which people have mused upon in their night dreams and waking life for time immemorial. And which literature has exuded since ancient storytelling. For instance, the wife who has dreams of her dead husband or a witness to a fatal car crash who dreams of the person killed in that crash. These are real imaginings. Smith plays him well with a range from orneriness to anchored goodness. 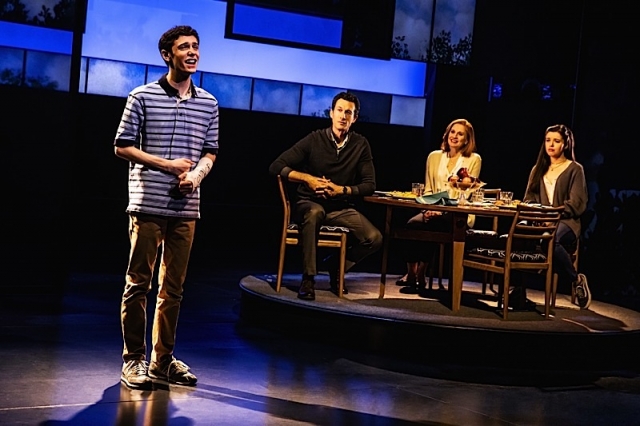 Anthony, who is typically the alternate actor for lead star, Ben Levi Ross, covered for opening night and shone brilliantly. He typically plays Saturday and Sunday matinees and embodies Evan’s sense of alienation and insecurity viscerally. He sings beautifully, although the night I attended the sound system and mikes were not operating as fully as they ought to have. Nonetheless, it was a wonderful performance in a mostly wonderful production.

In the touching Connor-Evan duet, Disappear, a lyric recurs: No one deserves to be forgotten/ No one deserves to fade away. This is one of this musical’s core ideas. Another is heard in You Will Be Found sung with true sensitivity by Anthony and the ensemble throughout. Perhaps no tune speaks so lucidly to the alienation and loneliness, not only of teens, but of people in general in our time when virtual reality is replacing, and in some cases has totally replaced, actual reality and relationships. We are made to consider that “friending” people online is self-deception writ large.

Moreover, the (perhaps unconscious) yearning of the human soul to escape this digital straitjacket is sung expansively by Anthony and the ensemble in what will surely become a classic tune in musical theater: For Forever. Sky, trees, and the real world are revered with an unwitting intuition of the sacred.

Evan’s financially struggling single mother, Heidi (Jessica Philips), is a nurse who seems to work around the clock, leaving her chronically shy son to fend for himself by leaving him with money to order out for his meals. This is a character set up to be judged negatively as the proverbially neglectful mother figure. However, thanks to the writing, lyrics, and Phillips, we understand the background that compels Heidi to make her choices. The zenith of the character’s arc reveals the unrelenting integrity she’s lives by and a beautifully touching scene of remembrance between a mother and her son confirms the depth of her love. Phillips’s rendition of the tune So Big/So Small wrenches with a delicate sense of anguish. 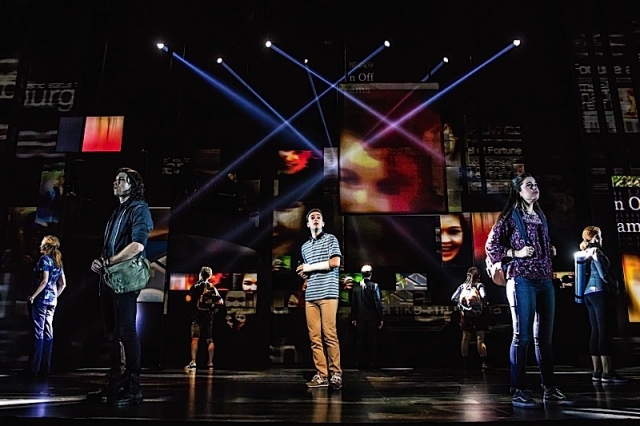 The musical hangs on that ethically challenging and timeless question of whether its right or wrong to lie or put forth a falsehood in order to spare others from emotional wounds. It’s clear from the start that Connor’s family is dysfunctional. Father, Larry, is dismissive and glib. Mother, Cynthia, is smothering and clingy but seems to have been genuinely and passionately concerned about him. Teen sister, Zoe, seethes with resentment toward her dead brother, so she is emotionally incomplete about his passage. It sets the audience up to dismiss them as the stereotypically selfish rich family. However, Aaron Lazar, Christiane Noll, and Maggie McKenna mine the characters’ humanity and each vulnerably examines how grief affects them individually. It’s legitimate to say these are brave performances.

In yet another scene, a delicacy of anguish is also transmitted vocally. Lazar and Anthony tenderly convey their emotional wounds to one another in the remarkable and moving duet, To Break in a Glove. They gingerly tread lightly around each other as Larry presents a baseball glove he gifted to Connor, but which his son never bothered to remove the tag from. This is an achingly endearing scene as it shows how Larry neglected his dead son, and yet he’s compensating by connecting with an appreciative Evan whose own father abandoned him. Sweetly tragic irony. We sometimes seek parental and offspring surrogates, don’t we? 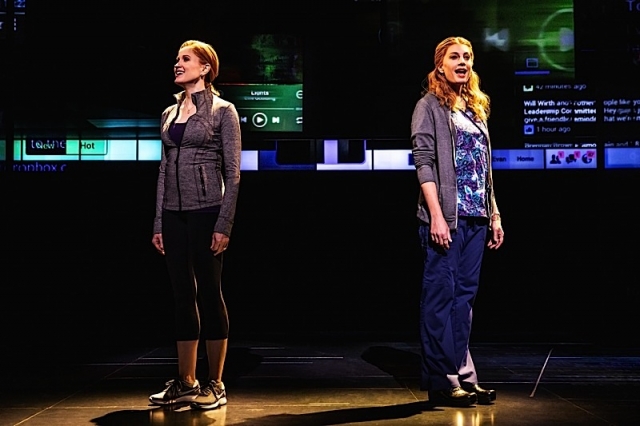 Jared Goldsmith and Ciara Alyse Harris add endearing support as two alienated classmates who are made to face their personal foibles and misplaced ambitions in face of the kaleidoscopic internet monolith that seems to be devouring culture. Danny Mefford’s choreography may be one of the simplest in Broadway history, but it enchants with spontaneously darling playfulness.

Dear Evan Hansen tends to elicit curiosity about gay and bisexual subtext, which will simply have to be in the eye of the beholder. That said, the book and lyrics are psychically reminiscent of iconic 20th century gay playwright Thornton Wilder, whose transcendent Emersonian sensibility continues to be revived in theaters throughout the nation more than perhaps any gay classic playwright, including Albee, Inge, and Williams. It also flickers with a charming Jewish sensibility throughout.

Dear Evan Hansen is directed by Michael Greif, who directed the original Broadway productions of Rent, Grey Gardens, Next to Normal, and If/Then, as well The Intelligent Homosexual’s Guide commissioned by the Guthrie Theater, for which he was interviewed in Lavender 10 years ago. With Dear Evan Hansen he continues to ride the crest of where the cutting edge and the general audience converge. Dear Evan Hansen is his greatest achievement. It won six 2017 Tony Awards and the 2018 Grammy for Best Musical Theater Album. For those at odds with contemporary music, Dear Evan Hansen may well give you pause. It’s swells with gorgeous splendor.