Teach Me How to… Dabble

The Beer Dabbler is back and better than ever
For the fourth year in a row, the Beer Dabbler is back at Twin Cities Pride. Kicking off the festival weekend, Dabblers will gather in Loring Park to enjoy pairings between more than 35 different food truck/craft brew combos, a dance party, a killer entertainment lineup, and…humans on wooden poles. (For real. See right.)

The Beer Dabbler and Twin Cities Pride teams originally teamed up in 2011 to raise awareness about the proposed constitutional amendment that would’ve put a constitutional ban on same-sex marriages in Minnesota. Today, The Beer Dabbler is a cornerstone of Pride weekend, and offers an opportunity to celebrate progress while still raising awareness about important issues facing our GLBT community. 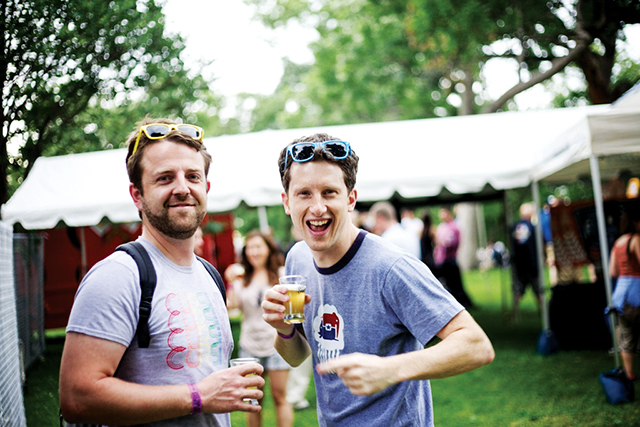 As Joe with the Beer Dabbler told us, “It’s exactly what it sounds like.” Participants face off in two teams, aiming for the opponents’ goal — all while keeping their hands connected via larger-than-life wooden poles. The only other rule? No spinning!

Special thanks to sponsor Can Can Wonderland for making this hilarity reality.

Specifically for our dedicated and faithful dedicated drivers (but available to all), Black Eye will have cold press on tap in standard and nitro versions, free to all attendees but intended to help keep our designated drivers alert and provide a safer version of a buzz.

There are more craft breweries and more food trucks than ever. And probably more attendees than ever (that’s where you come in). In response, the Beer Dabbler at Pride will be about 25 percent larger. More space for dancing, we say.

The Beer Dabbler at Pride has become known for its killer music lineup—including the recurring dance party thanks to electronic-based three-piece dance band Apollo Cobra. (Yes, back this year!)

A portion of all proceeds from the event benefit Twin Cities Pride, a 501(c)(3) nonprofit.