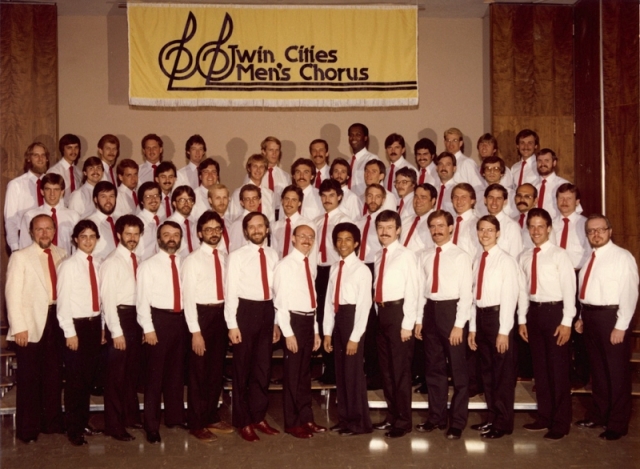 The Twin Cities Gay Men’s Chorus (TCGMC) is celebrating its 35th year and is currently under the direction of Ben Riggs as artistic director and Jeff Heine as executive director. I was able to talk to Jeff Heine about the history of the Chorus as well as their big concert coming up this weekend. Be sure to get your tickets if you haven’t already; the night is going to be another one for the history books.

It’s TCGMC’s 35th year — what’s this big celebration at Northrop? What can we expect?
Jeff Heine: This is a special one-night-only concert on Saturday, April 2 and we are so excited to perform on the Carlson Family Stage at Northrop. I have so many memories of going to Northrop to see touring Broadway shows before the renovations of the Hennepin Avenue theaters in downtown Minneapolis; Northrop is truly a grand dame of performance venues. You can expect a concert that will feature new music, music that honors the rich choral tradition that we have here in Minnesota, and some highlights from the works we have commissioned over the years. And at least a couple of surprises! It will be a wonderful night.

How has the Chorus changed over the past 35 years?
JH: Gay and lesbian choruses were popping up around the country in large cities in the early 1980s as a response to the AIDS crisis. Our community had no voice; and for some, our voice was found through music. If you talked to any of the original members during that time, I don’t think any of them would have predicted how far we would have come and how many things would have changed for the better by 2016.

But while the world around us has changed, the Chorus, I think, remains the same. Yes, we have grown up from a young start-up of guys wanting to get together to sing into a successful non-profit music organization, but the core of the Twin Cities Gay Men’s Chorus has not changed. New LGBT choruses are still forming for the same reason: to share our stories and change lives through the performance of great music. We always have been. We always will.

What are the most impactful moments or appearances in the history of the Chorus?
JH: I could talk about many tours and performances. There was our tour of the Deep South back in 2006, and world premieres of new choral works…but I think the most impactful moments are the individual stories we hear from our audiences. Stories of how attending one of our concerts or an outreach performance was life-changing for them. And it makes you think of all of the other individual stories that are out there in our audiences — the stories we never hear.

For example, last year we performed out in Marshall, Minnesota. After the concert, someone in the audience came up to our ASL interpreter and asked if it was ok that he had video taped him interpreting one of our songs, “Testimony.” This song is based on the It Gets Better Project. The lyrics include portions of letters written by young people who want to take their own lives, and then other letters from young people who realized all there was to live for. This person told our interpreter, “My parents are deaf, and I finally have a way to show and tell them my story!”

Our mission is gay men building community through music. This change is often not a sweeping one, but through one person at a time. Those are the most impactful moments of all.

What do you see in the future of the Chorus, both short-term and long-term?
JH: The Chorus is in an excellent position right now. One reason we were very low-key about a 30th anniversary five years ago was because we were still dealing with some major financial issues that threatened the future of the organization. So this year, we decided to shout out to the rooftops that we were 35 years old and the future of TCGMC is great! We will continue to perform a full season of concerts. We will also continue to get out in to the community. But we need to get out even more. We are fortunate to live in a state that is very supportive of the arts and we need to leverage that to get out and share our stories through music. Our hosts and our audiences in rural Minnesota are always incredibly welcoming and supportive, and we know we are having an impact by being a positive role model for many people out there coming to terms with who they are. We need to do more of this and we will.

What other events do you have lined up for this 35th season?
JH: Once the anniversary concert is done, we start working on our new commission, “Two Boys Kissing,” which will have its world premiere here in June. The guys will be working hard on this music because we go to the recording studio in early May so we can have a CD available for sale at the premiere concert performances. Then we head to GALA Festival in Denver this July to perform the work for over 6,000 singers from other LGBT choruses throughout the country, Canada, and other nations. After that, you can expect to see our new commission performed by other choruses.

“Two Boys Kissing” is based on the young adult novel by David Levithan, and we cannot be more honored and excited to be rehearsing this new work. The book is narrated by the generation of gay men who died of AIDS in the 1980s as they observe the lives of a small number of gay teens who are dealing with first love, coming out, self-awareness and belonging. The Chorus will be playing the role of this chorus of narrators. The source material is wonderful and this new choral work is stunning. Bring plenty of tissues!

A Night at Northrop with the Twin Cities Gay Men’s Chorus will be at Northrop on the University of Minnesota – Twin Cities campus on Saturday, April 2. For more information and to purchase tickets, head to www.tcgmc.org. 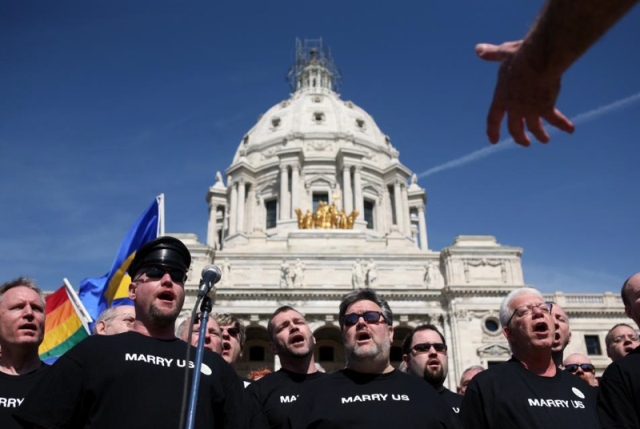 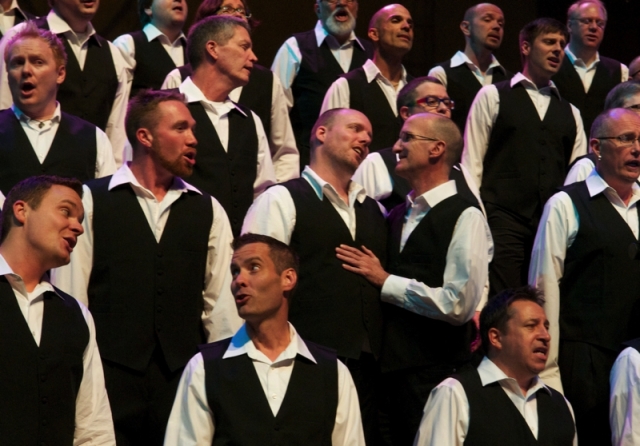 Camaraderie on the risers. 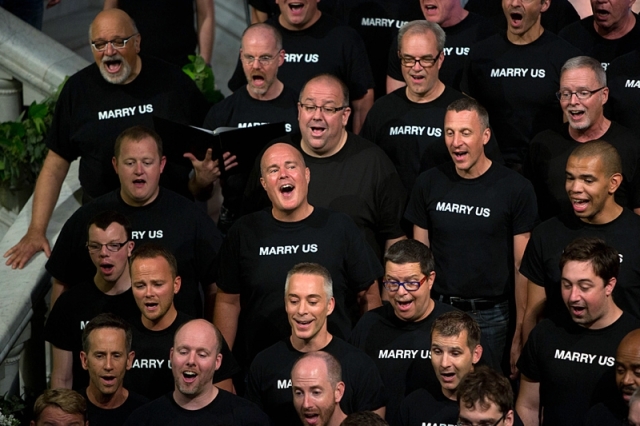 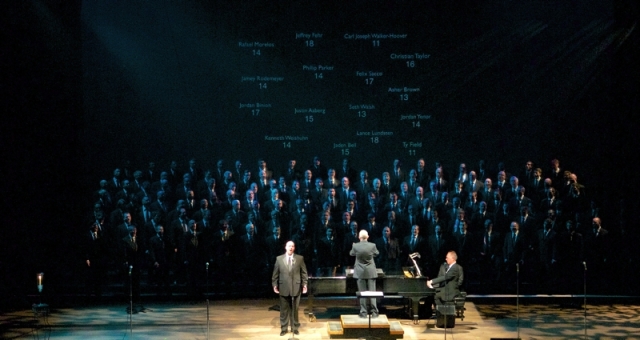 “Bring Him Home” from Les Miserables, a song for our lost younger brothers and sisters.

Most recent concert, “Under the Mistletoe.” 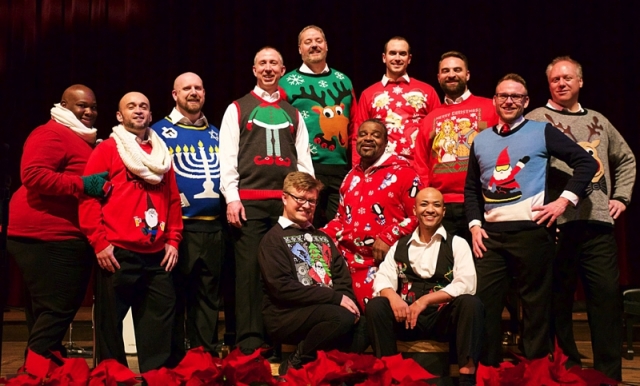 OutLoud! in their holiday finest. 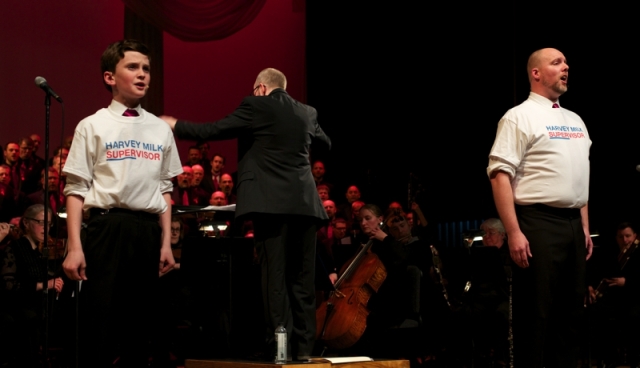 “I Am Harvey Milk” in 2014 featuring Quinn Morrissey and Nathan Croner. 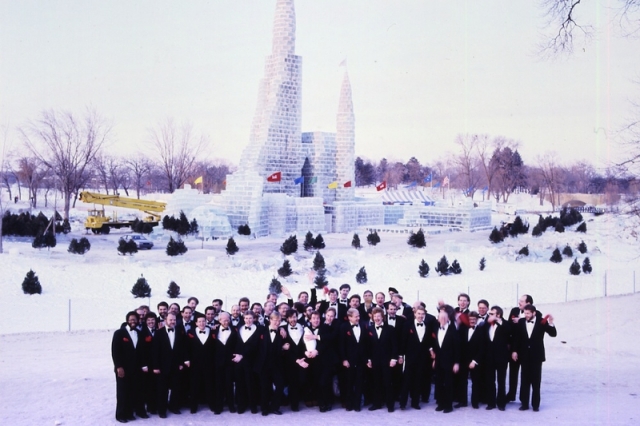 TCGMC at the St. Paul Winter Carnival Ice Castle in 1986.