Talking Your Way to Spain

“I am exciting to meet you. Please to sit with me,” pronounced Sonia in her very best English as we boarded the bus in Madrid. She was one of 24 brave, determined Spaniards who’d signed up for a weeklong program of speaking English 24/7 with 24 Anglo participants. We Anglos had volunteered our time and vocal cords in return for a free week in Spain. Bus, villa bedroom, meals with wine: everything but airfare was provided. But the biggest freebie was far more precious: the opportunity, lacking to most tourists, to get to know—really, really know—individuals in the country they’re visiting.

Most of us vacationing abroad can only interact with taxi drivers, waiters, hotel clerks. Here, in the Diverbo program, the conversations quickly make the leap from “Where do you live/What is your job?” to politics, religion, abortion—and those are merely the safer topics. Pablo shared strong feelings about the volatile Catalonian situation; Francesca, the wave of new immigrants; and Maria, about being a professional woman in a man’s world. In turn, I mouthed off about the state of American politics and lack of gun control. Happier topics, too—such as Spain’s early-on acceptance of gay marriage and, indeed, of no marriage at all in this once-conservative country. Or simply, your favorite films. Or food. 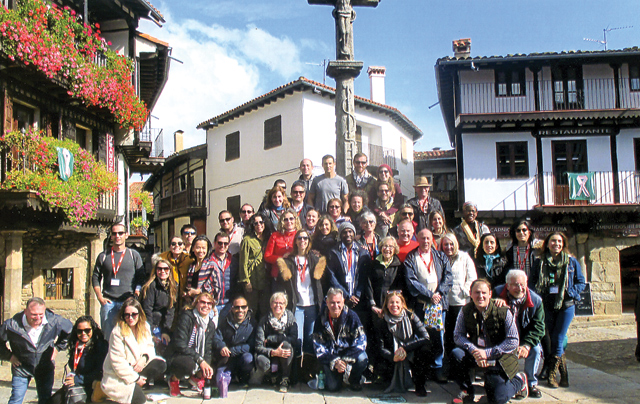 Anglo and Spanish visitors mingle for a visit to the town of La Alberca.

When I first heard about the program, it sounded too good to be true. I kept waiting for the time-share promo, but it never came. The only requirement for a volunteer is to be gregarious—and speak no Spanish. Another bonus: We Anglos came from Britain, Australia, Ireland, Wales, New Zealand, Canada and the Caribbean as well as the U.S., so we also got to make even more international friends. We ranged in age from 20-something to 70-plus—everyone from students on college break to teachers, a policeman and musicians.

The Spaniards were mostly middle-managers in their companies. All were proficient in textbook English—could pound out emails—but terrified of talking. They needed practice in listening and speaking in order to advance in their jobs, which ranged from architect to IT security, from magazine editor to marketing exec. One gent simply wanted to keep up with his kids, who studied English at school. Another had been passed over for a new job when his interviewer abruptly switched to English. Yet another must attend a meeting in Germany, where English would be the common language.

As the bus bounced through the mountains, a few Spaniards reacted like deer in the headlights to our conversational attempts. They simply nodded their heads and responded, “Yes, I think so,” trying like crazy to figure out what the guy with the Welsh accent was saying, or what lingo the lady from Texas employed. 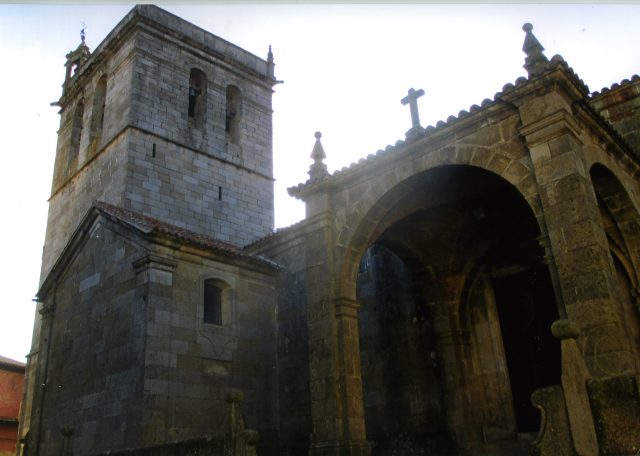 La Alberca is home to a multitude of architectural wonders, including its churches.

But a glass or two of wine at dinner promoted proficiency. “A-MAZ-ing!” declared Antonio, a 30-something Energizer Bunny, when he learned I was from Minnesota. “Teemberwolves!” he shouted, leaping from his chair with a bucket shot demo and a high-five. And when folks discovered I was from the hometown of Prince, I became an instant celebrity.

Our days began with breakfast at tables of four—two Spaniards, two Anglos. Then, a series of hour-long one-on-one conversations. First, we quickly discussed the verb phrase of the hour (hang on vs. hang out vs. hang in) and an idiom (“I’m all ears;” “the sky’s the limit”). Then we were free to talk about anything under the Spanish sun—music, movies, travel, food—as we chose to ramble along mountain paths leading from our forested resort lodgings to La Alberca, a tiny medieval village a mile away, or to cozy up by the fireplace.

Once a day, two-on-twos were scheduled. Suggested topics—always controversial—included “English should be the universal language” and “Families should not have more than one child.”

After lunch, a siesta—the only free time of the day. I’d walk into La Alberca to marvel at its half-timbered houses, their stone lintels carved with dates from the 1700s. During one such exploration, I found myself locked in the church (Long story. Which made me the topic of a trivia game that evening.) Others would snooze or hit the internet.

At five, we reassembled for a group activity. Divided into eights, we worked together to complete a creative (and competitive) assignment to present to the others, such as arriving at three questions to ask God; formulating a marketing campaign for an ice cream company; or with only a blanket as prop, introduce a “new product” with a 30-second “video.” Another day, it was a game of Truth or Lie (turns out, I am a champ at the latter.) Yet another: Talk about the biggest risk you’ve ever taken.

More one-on-ones until theater time at eight, when, after an hour of rehearsal, groups would present hilarious skits, which the program director had lifted from Monty Python or Saturday Night Live, complete with outrageous costumes from the prop box. Games followed, too. Ever play Competitive Simon Says? Or another called All Those Who… , which is like musical chairs on steroids. When the leader throws out a category—such as “are left-handed,” one scrambles for a vacant chair. Broken limbs are rumored to have resulted.

Finally, dinner at nine—early for Spaniards, not so for us Anglos: always a choice of two appetizers and two entrees plus dessert. Then optional bar time and/or a dance party or show, such as the night each country’s group was asked to sing a national song. We lame Americans chose “You are my Sunshine.” The Caribbeans won with “Day-O.” (Duh.)

As the week wore on, the Spaniards loosened up. A young lady who, on Day Two, was ready to pack it up, by Day Five was jestingly taunting a fellow Spaniard to “Shut up your mouth!”

The language challenges became more complex when telephone conversations were added to the mix in order to negate the clues of body language. First, a one-on-one from adjoining rooms (My assignment: to try to hire a babysitter); later, a conference call involving one Anglo and three Spaniards. The “real life” scenario I led was as pretend-exec of an American company dressing down the management of a hotel it owned for inferior service. These exercises were guaranteed to drive home the day’s idiom—“Think on your feet.”

Finally, graduation for the Spaniards and a lot of kissing (once on each cheek) for everyone as we exchanged emails addresses, set up a Facebook page and bid fond goodbyes.

This was my fourth program in Spain. I’ve also participated in identical programs in Italy, Romania and Poland. For information, dates and applications for Spain and beyond, visit www.diverbo.com or, in Eastern Europe, www.angloville.com . Then, get set to have fun!

The program starts and ends in Madrid, so do take a day or two to explore this dynamic city. Diverbo’s website suggests well-located, budget-friendly hotels as well as must-see sights. I found my own hotel, the hipster RoomMate, in the gay neighborhood called Chueca. The metro is easy to navigate, and shopping is a joy (think: shoes, shoes, shoes). Check out the street called Calle Leon for indie designer shops and antiques.

Tapas bars abound in every direction: bordering the must-see Plaza Mayor, heart of medieval Spain; along the street called Jesus behind Paseo del Prado, named for the world-famous museum it anchors. And along Calle Huertas, near the Teatro Huertas, Huertqa u Espagnol. Stroll through the modern Mercado San Miguel, just off the Plaza Mayor, with its upscale food stands (oysters with bubbly, anyone?) Talk about people-watching!

More art? After a dizzying spin through the gigantic Prado, head across the street to the gem of a museum nicknamed the Thyssen, whose wealthy founders must have said, “Give one of every bold-name artist.” Head onward a few blocks to the Reina Sophia, bastion of contemporary art, including Picasso’s famous “Guernica.”

Stroll through Retiro, the Central Park of Madrid; catch a bullfight or a flamenco show; or laze away your day over a cup of hot chocolate and churros (doughnut fingers amid the locals at San Gines, in business since 1894. Rinse and repeat. For more, contact: www.spain.info.