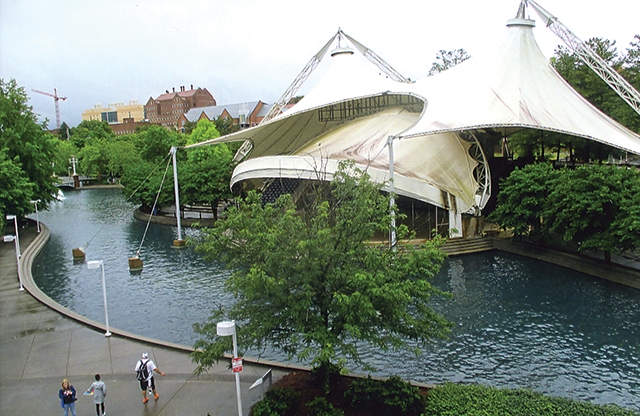 One heck of a view from the 28-story Sunsphere, originally erected for the 1982 World’s Fair in Knoxville.

When the railroad depot was built, Chattanooga choo-choo’d into its golden era. Later, as train travel dwindled, so did the city’s charms. During the ’80s, recalls a local booster, “The downtown was shabby. So was the riverfront.” Lights went out on Broad Street.

A city father chanced to visit San Diego’s famed aquarium and wondered, “Why not?” He parlayed his buddies into fundraising for a riverside aquarium of their own, to spur tourism—Oh, and while we’re at it, boys, why not dream bigger? So simultaneously a hometown art museum—The Hunter—was expanded to become world-class. Broad Street was spruced up. Destination restaurants leased real estate, a captivating River Walk was built, and the town stated punching above its weight as a vacation destination.

Folks flock from far and wide, as they’ve done since the outset, to Ruby Falls, discovered by accident 90 years ago, as star of a vast underground cave network in which guides led tourists through thickets of stalactites and stalagmites and curtains of stone drapery, climaxing in an underground rotunda spliced by an amazing waterfall. Cue the oohs and aahs. 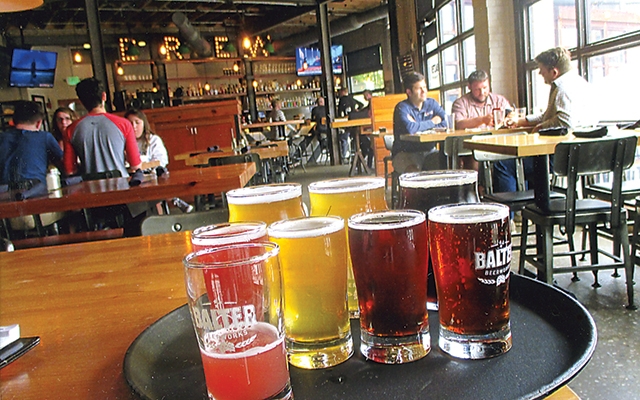 Add that landmark aquarium—a building each for freshwater and ocean fish—and aside it, a stairway to the river engraved with the sad legend of the Cherokee Indians’ Trail of Tears in 1839. Above it, a stroll-worthy bridge leads to the boho sector of the city. Here, the blocks lining Frazier Avenue are home to shopping ops like Locals Only (sassy regional gifts like signboards claiming Mama Tried to a BBQ set and Southern breakfast kits). Works of 30 artists fill In-Town Gallery. Blue Skies sells pins with attitude (Unemployed Philosopher) and magnetic poetry kits (Svenska and Yiddish included). Used everything-you-want (books, vinyl, CDs, collectors’ toys, road maps) abounds in Winder Binder.

As you stroll its sidewalks, marked with dance steps (Mambo to Hokey Pokey), quench your thirst at Beast & Barrel, a gastro-smokehouse; hit Base Camp for comfort hits like meatloaf, pot roast and mac and cheese; and seek sweet treats at Julie Darling Donuts (“Home of the donut sundae”). No Baked beckons as a scoop shop devoted to cookie dough.

Only-in-Chattanooga museums flourish, too—one commemorating the life of Bessie Smith, the local “Empress of the Blues,” mentored by Ma Rainey; another showcases—wait for it—tow trucks. Yet another, carrousels.

But if there’s only time or stamina for one, make it Songbirds. It’s the Vatican, the Louvre, the Mecca of guitars, with 525 class-act instruments, donated by an anonymous collector who happens to be a billionaire—the Vault Room alone holds dozens of models, each “way over six figures,” recounts guide Irv Bernes, a New Yorker who moved here for his dream job. He walks visitors through the decades—50s, 60s, 70s—highlighting innovations (solid models to electrics to custom colors).

The jukebox of City Café Diner—frozen in the red-vinyl Fifties—doesn’t compare, musically, but their biscuits and gravy (served 24 yours) make the cut. Even better, the down-home fare at Maple Street Biscuits, where those ultra-fluffy rounds come piled with fried chicken, bacon and cheese, as well as two styles of country gravy. I spooned up both like ice cream. 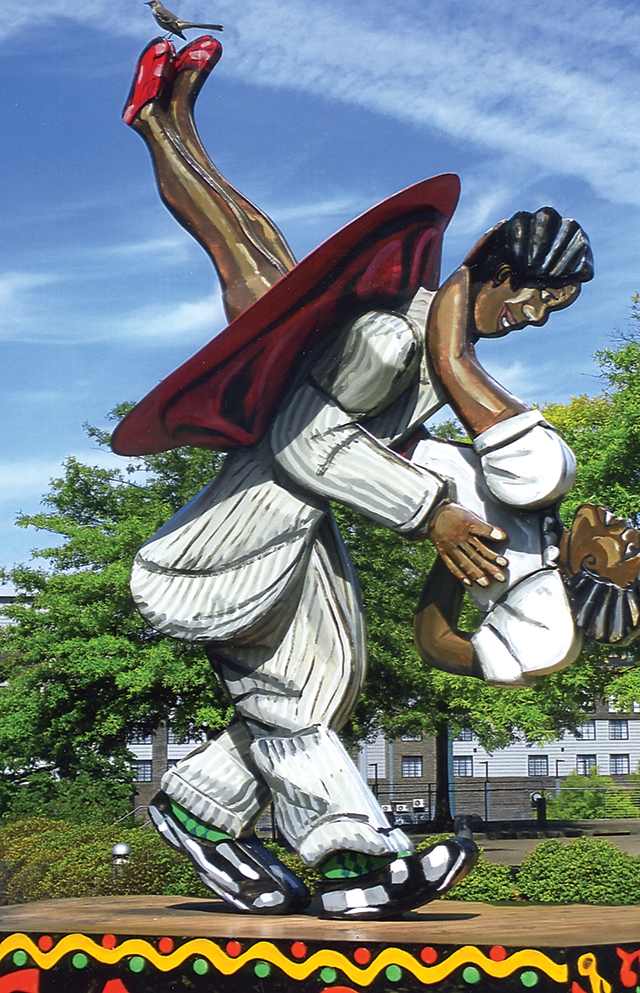 Get your Moon Pies at Broad Street’s General Store. The iconic spongy cookies sandwich yummy fillings like classic marshmallow and trendy salted caramel. Mainstreet Meats—a butcher shop-cum-café—does a dynamite Reuben, best-selling turkey sandwich and retro meatloaf, as well as deepfried potato salad. (Any edible foodstuff, and then some, comes “fried, refried and then deep fried,” as a culinary pro explained.)

The same owner operates Easy Bistro, where he applies Appalachian touches to French staples. New kid on the scene is Gillers Grill, where starters run from devilled eggs to shrimp risotto. Oh, you want oysters? Head to the waterside River Café. Fab avo toast, too.

Knoxville fooled the skeptics. “Who’d want to visit this scruffy little city?” those pompous East Coast papers wondered editorially when the Tennessee city was chosen to host the 1982 World’s Fair.

Well, I, for one. I’m no Eastern fool. I soared to the viewing platform atop the 26-story Sunsphere, erected to anchor the exposition. Far below glitters the Tennessee Theater of 1928, a glam Moorish Revival movie palace that today hosts concerts and operas, as well as films. And over there, across the lazy river, gleams the Museum of Contemporary Art with its lobby-wide glass installation and once-controversial “History of Tennessee” mural, enraging local bigots by portraying Blacks, and enraging Blacks by their depiction as happy-go-lucky minstrel types. 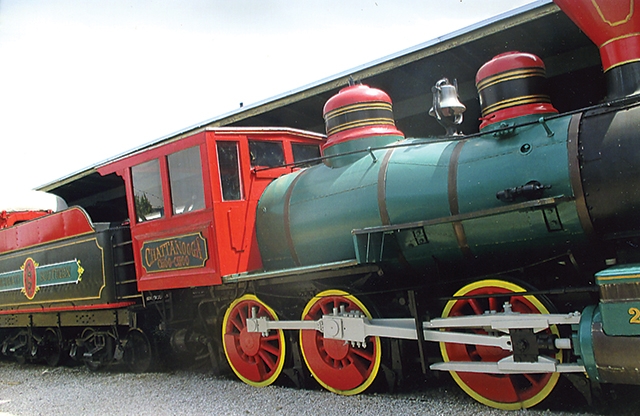 A train in Chattanooga’s vintage collection at the Chattanooga Choo-Choo Hotel.

It’s also home to East Tennessee History Center, telling the story of a divided state. While Tennessee seceded in the Civil War, its population split 50/50—even right down family lines—and supported an all-female Confederacy Home Guard. It also became the first Southern state to rejoin the Union after 1865.

The story continues with the dust-bowl drama of the TVA; the secret Manhattan Project at Oak Ridge, where atom bomb research was underway; and an exhibit devoted to mountain music. “Call Me Hillbilly” reports that “playing a banjo was as natural as talking.” Yet when Tennessee Ernie tried for a radio gig, he was turned down because, intoned a sponsor, “that jump-up-and-down music won’t sell groceries.” Never mind. At noon daily WDVX broadcasts live music from downtown’s Visitors Center—and admission’s free. So are the artists’ shows at the Emporium, where the First Friday crowds number close to 2,500.

Boho types are forming a critical mass in the town’s Old City, according to chef/owner Jeffrey de Alejandro, who serves Latin-flavored breakfasts at Oli Bea and soon will debut a butcher shop/deli close by. “It’s like Sesame Street for grownups,” he laughs, counting up neighboring eateries like Lonesome Dove, Old City Java, Good Golly Tamales and the Pretentious Beer Company.

The last one is Matthew Cumming’s baby. He’s at the forefront of the neighborhood renaissance with his brewery (and sassy-named brews), but he’s unique in that he also blows the very glasses in which they’re served. That’s why friends labeled him “pretentious,” but Matthew, as a master glassblower with Venetian mentors, just calls it business as usual.

Between these two cities looms Pigeon Forge, a kind of redneck Vegas, with 70-some showbiz attractions, plus fun stops like Ole Smoky Moonshine, “the most visited distillery in the nation,” swears Johnny Baker, who offers taste-tests of more flavors than are good for you. Old Forge Distillery does the same but expands its repertoire into premier whiskey. No booze at Huck Finn’s, but darned good catfish, hush puppies and fried green tomatoes. Dolly Parton herself was on hand to open Wildwood Grove, a huge expansion of her theme park here, featuring rides tame enough even for me to what appears to be a death-wish rollercoaster trek. For info, visit www.MyPigeonForge.com.