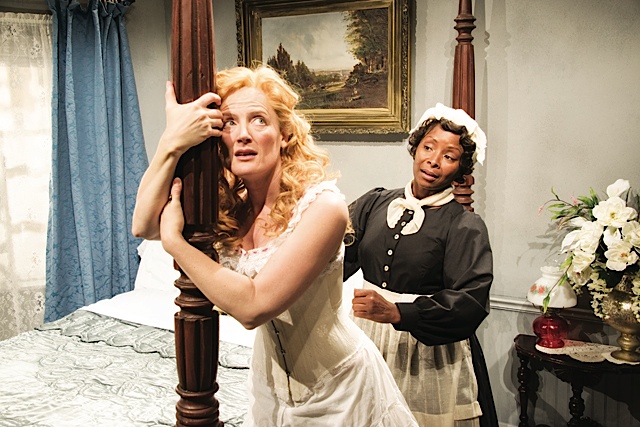 Pulitzer Prize-winner Lynn Nottage is an adventurous playwright who transports us to different realms: from New York tenements in the early 1900s as in Intimate Apparel, paramilitarism in the Congo as in Ruined, to 1930s Hollywood as in By the Way, Meet Vera Stark!, now onstage at Penumbra Theatre. Nottage has a range that always reflects her innate concerns about race and gender.

The character, Vera Stark, was inspired by a player of small film roles, Theresa Harris, perhaps best known as the maid and one enduring friend of Barbara Stanwyck in Baby Face (1933). The play involves a Hollywood studio’s plans for an epic titled The Belle of New Orleans which is rumored to have some parts that actually focus on black characters. This gives Nottage an opportunity to weigh in on the discrimination of the era as well as ways contemporary audiences and scholars may view things in retrospect.

Crystal Fox, who was named Lavender’s Best Musical Actress in 2010 for Penumbra’s Black Pearl Sings, plays Vera. She points out that Nottage has provided actors working on this script research links which she says have been wonderful. However, too little seems to have been preserved of the black experience in Old Hollywood. Countless black performances in old films were uncredited.

Fox shares, “After looking up and sadly not finding a lot of pictures of black female actresses who paved the way, I researched the era to get a feel for the times. I reflected on all of the ups and downs, in and outs, of what it has taken for me, personally, to become and maintain a career as an actress. And the conversations that are unfortunately still occurring among us as artists. Ms. Nottage has captured in dialogue the language of many conversations I’ve been a part of throughout my career.”

Director Lou Bellamy, who was named Lavender’s Theater Artist of this century’s first decade along with Frank Theatre’s Wendy Knox, points out how Nottage’s play resonates with “the dilemma facing black actors both then and now. America and the Hollywood movie industry in microcosm adhered to a carefully prescribed narrative that they sought to preserve. Just as today, there were factions of society, most generally the South, which reacted quite openly when confronted with behavior that did not conform to their stereotypes. The North, while less strident in its condemnation of blacks playing anything but the most stereotypical roles, was unwilling to risk alienating southern ticket buyers. President Woodrow Wilson had termed D. W. Griffith’s blatanly racist Birth of a Nation as ‘writing history with lightning.’ The challenge for black actors was to enliven the stereotypical roles they were provided with humanistic and complicated portrayals. Standing up to negative stereotypes and attempting to reshape an American narrative which finds it difficult to provide for black individuality and accomplishment was a challenge then and remains so to this day.”

Penumbra’s Co-Artistic Director Sarah Bellamy states, “The honest truth is that even today white audiences will pay to see stereotypical depictions of black people on stage and in films. The only corrective to this is art that is created by, for, about, and near black people. Without artistic control, there is no guarantee that the stock characters of America’s minstrel era won’t sneak on stage. The fact that there is still an appetite for these depictions is a measure of our progress as a a nation toward equity and social justice.”