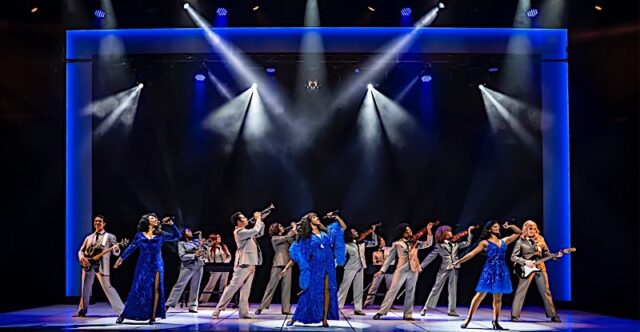 The cast of "Summer: The Donna Summer Musical"

I attribute my love for a lot of different styles of music to my parents. I never really thought about it until I got older but my parents both love music and they love different kinds. Maybe I’m an old soul or maybe it’s because I’m also gay but I love disco. There is something about the ’70s era of music—especially disco—that just makes my foot tap, shoulder pop and then I’m dancing around with my hands up. This included Donna Summer, which is why I’ve been counting down the days till I can get back to a theatre and watch Summer: The Donna Summer Musical.

Known as the Queen of Disco, Donna Summer was an American singer, songwriter and actress who truly made a lasting impact on dance, disco and pop music in general. She recorded countless hits, including “Love to Love You Baby” “I Feel Love” “Last Dance” “Hot Stuff” and “Bad Girls,” to name a few. She was inducted into the Rock & Roll Hall of Fame in 2013, and now has been immortalized within the musical theatre industry with this musical.

The musical is a typical biographical jukebox production, however the formula is made up a little bit differently. While it covers the major moments of her life—including the rise to disco royalty, relationships, family, and even a few bumps along the way, the book doesn’t focus on one actress. The role of Donna is not given to simply one person. She is broken up into three different roles: Duckling Donna, Disco Donna and Diva Donna.

While each role covers a different aspect of her life, they also all have moments together—whether it’s giving each other advice or even singing a song. I found it really interesting to use this approach to telling her life and it works. By breaking it up between three actresses it allowed each moment in her life to really stand out. It helped break apart a decades-long career to make it more digestible for the audiences and allows the book not to get too bogged down with details.

The set is exactly what it should be: simple. It serves its purpose by transporting us to a variety of places through unique lighting and a simple screen above the actors upstage. It wasn’t too distracting and often would show real pictures of the actual Donna Summer. The lighting featured a variety of cool colors for a majority of the disco songs—including purples, blues and pinks. However some songs called for something warmer, including “She Works Hard for the Money” and “Hot Stuff,” which of course featured more reds, oranges and yellows.

I was hesitant when the show started due to the sound mixing and editing. Whenever a large ensemble number was present, which is what the show starts with, it was just too aggressive and in your face. I can’t tell if it was the volume of the show or the actual sound mixing, but it was just hard to understand the ensemble.

Each Donna brought grit and some incredible vocals to the role, including Amahri Edwards-Jones who plays Duckling Donna. She also has some emotional numbers to sing that really show the hardships Donna had when she was younger. Whoever is cast as Disco Donna, which in this case is Charis Gullage, has to be prepared to really carry a large chunk of the show. Gullage nails it. Her vocals are powerful and sensual with numbers like “Love to Love You Baby” and “MacArthur Park.” I was in absolute awe every time she sang.

Diva Donna, who is played by Brittny Smith, serves partially as a narrator but also plays Donna in some of the hardest times of her life. She is the more wise and mature of the three Donnas. Now that doesn’t stop Smith from also nearly blowing my glasses off with her powerhouse vocals. She was absolutely divine and also had fantastic comedic timing.

Something I appreciated about all three Donnas was their ability to make an incredible hit, and well-known song, their own. It never felt like they were trying to replicate, duplicate or copy Summer’s performances. They took the original source material and added to it to make it their own and that is something as an ex-performer I truly appreciated. This is a trap that a lot of biographical musicals can fall into. It treads the line of tribute cover band concert, but these three performers kept the show in its lane, which is a true musical.

Honestly I can’t recommend this show enough. It is just a fun hour and 40 minute production that really had me smiling ear to ear all night. Even as I type out this review I’m hearing the Summer voice singing toot toot, yeah, beep beep. It’ll make you appreciate the hard work Summer put into her career and will have you tapping your foot all night. Her music is infectious and will forever go down as some of the best.

Summer: The Donna Summer Musical is here for an extremely small window of time. The show runs now through January 2nd at the Ordway Center for the Performing Arts in St. Paul. Tickets can be purchased here.