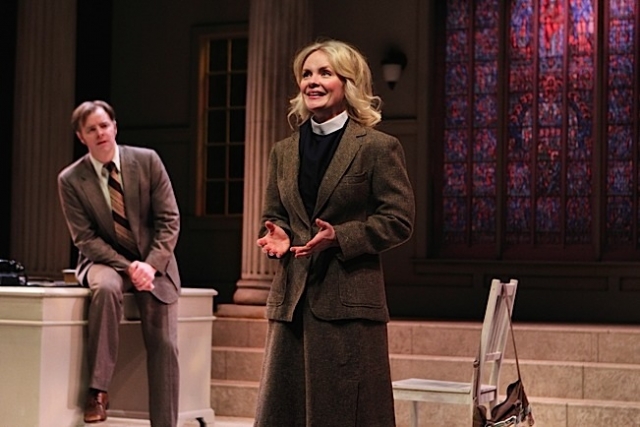 Playwright Kristine Holmgren has worked magic with her autobiographical play, God Girl, now in its premiere run at the History Theatre. It’s one of the best and funniest feminist plays of recent years. Better yet, the humor is human rather than snarky. It comes out of scrupulous observation of human behavior, both male and female.

God Girl reflects on Holmgren’s experience as a seminary student in the 1970s after graduating from Macalester College. Soon after her arrival (1) a male seminarian deliberately walks in on her while she’s taking a shower, then says she can’t take a joke when she calls him on it. (2) She is taken under the wing of a young pastor who plays head games with her as he audaciously tries to maneuver her into his personal and most private life right under his own roof with his wife. (3) She defies the semi-conscious patriarchal slant her careerist male professor promulgates. (Careerism in a seminary is something the play implicitly cautions us about.) 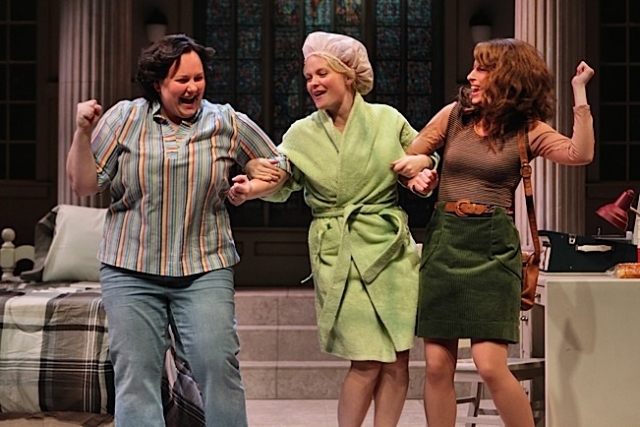 Though clearly, this is a polemical play, God Girl’s characters are viscerally human. The magic Holmgren has worked lies in her ingenious way of revealing these men as having internalized their misogyny because of the institutional church values they’ve never questioned since childhood. Not only do they not know themselves, they cannot know themselves because of their indoctrination.

Another master stroke is how the men seem, I repeat: seem, to be more evolved and mature as they get older. For instance, the shower peeping Tom exists on an adolescent, even primitive level – trying to sneak a look at a naked woman like a giggly school boy. The pastor expresses grave regret over the innocents he killed in Vietnam -a regret one ought to give him some credit for – but we come to see not only that he is insincere, but he has used his seeming repentance to curry favor with congregations and higher ups in the church hierarchy.

An elder professor on one hand has all the gravitas of someone secure in wisdom, knowledge and steady maturity, yet he baldly shuts the women in a class out of any discussion – emotional and intellectual dishonesty that secures power not wisdom. Moreover, an administrator has clearly done more than his part to turn what should be a center of spiritual enlightenment into a corporate business model.

Holmgren’s brilliant script is given a brilliant lead and title role by Summer Hagen who portrays the playwright herself. The challenge of playing young Kristine is to keep her from appearing shrill so that we always sympathize her what’s being unjustly and unconsciously meted out to her. Hagen walks this tightrope masterfully. Director Ron Peluso has steered her and all performances with a masterful hand as well. 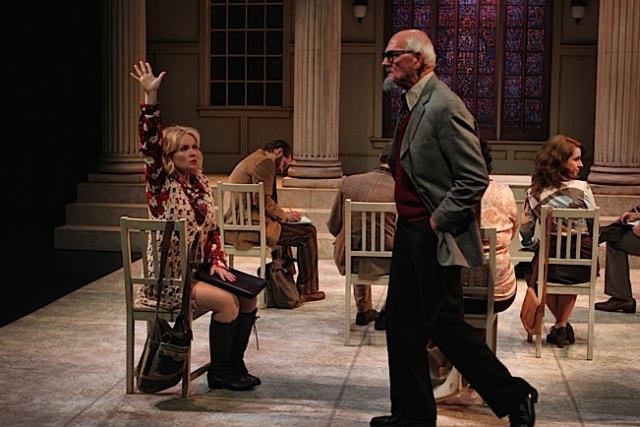 Sean Dooley is maddeningly appealing and superbly multilayered as manipulative Paster John McGovern. Richard Ooms in some of his best work ever epitomizes patriarchal privilege at its most insidious as both Dean Adams and administrator Dr. Peters. Watching his performances one gets dark insights into the psychology of older men. Ooms gives two bravely negative portrayals that nakedly expose male negativity. His work is on a par with  Bruce Dern and Harry Dean Stanton, as two harsh Mormon patriarchs in the HBO mini-series Big Love.