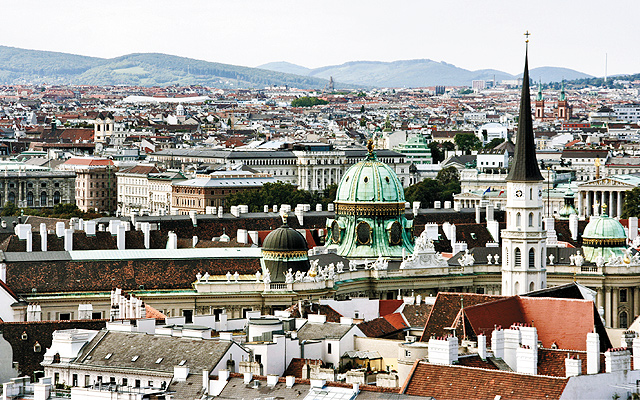 As my taxi brakes at Vienna’s Hotel Sacher, 600 tweens shriek a welcome. I return a queenly wave, then look behind me. Oh. It’s Justin Bieber.

It’s true: Vienna is loosening her stays, trading her former uber-propriety for a bit of a fling. (OK, I’m still the only felon who crosses a deserted street on a red light.) The Imperial palace of super-human proportions and its sister High-Baroque buildings within the Ring Road circling the inner city still salute the Good Old Days, but in neighborhoods beyond, young urban bohos are claiming turf.

With Alexa as my insider-guide, I cross the Danube Canal to the Second District—once home to a scrambling working class, mostly Jewish (Indeed, Orthodox believers still stroll past us, clad in black.) But today, marshaling the canal, rises a new Sofitel Hotel, the work of star achitect Jean Nouvel. Within that building flourishes Stilwerk: three floors of forward, must-have home décor studios.  Deeper into the Second, we pop in at Song, showcasing designer women’s wear and pre-war French furniture. At neighboring Café Ansari of industrial chic, Turkish food accompanies your cappuccino. Skopik & Lohn—a trendy club—showcases a ceiling splattered a la Jackson Pollack, while nearby, and still not gentrified, the Carmelite open-air market seldom sees tourists fingering the tomatoes. We pass Muth—new home of the venerable Vienna Boys’ Choir—and Augarten, a formal garden park, now anchored by the Porcelain Museum, showcasing classic to contemporary designs. The Thyssen-Borrnemisza Museum of Contemporary Art also has chosen the Augarten for its new home.

Next morning, I’m venturing beyond the opposite Ring Road boundary to Naschtmarkt, pushing through throngs of shoppers ogling everything from picnic-ready cheese, sausage and produce, to classy Champagne-and-oyster combos. Furrowing deeper, I reach the lusty flea-market section, where I resist the opportunity to purchase a wind-up Victrola, be-ribboned war medals, vintage furs and tarnished silver. (Well, I love that miniature clock, even sans its innards!)

But the golden dome of the Secession Museum is beckoning. Inside, it celebrates rebels of an earlier era with Gustav Klimt’s jaw-dropping Beethoven mural, lush with juicy Art Nouveau nudes. Other rooms continue its radical, anti-establishment mission. So does the Leopold, my favorite of the Museum Quarters’ venues. Here, more radicals, as in Egon Schiele’s grimly risqué work: crumbling city-scapes, decaying fields, Madonnas-as-death’s heads, and the passionately embracing “Cardinal and Nun.”  Klimt again is memorialized by his gold-kissed Art Nouveau women. (Both friends died in 1918.)

Hungry for more art, I climb the endless stairs of the Academy of Fine Arts to revisit Teutonic superstars of former eras—Rembrandt, Rubens, Durer, Bosch. Still outside the Ring, but just barely, I’m wandering the Museum of Applied Art (MAK), much more enticing than that boring name, with flamboyant displays of furniture design, past—gorgeous past—to futuristic.

Then it’s on to Mozart’s House itself, where he composed “Marriage of Figaro,” but short on artifacts. Better to head directly to the fascinating House of Music, which starts the journey with explanations of how our bodies hear sounds. Then, interactively, listen to various noises, from coughing and snoring to washing windows, lightning strikes, the re-entry of Apollo. Even create your own CD.

Next, and best, is the lively story of the lively lives of the city’s musical sons: Haydn (including the parrot, now stuffed, who called him “Papa Haydn”); then Mozart, whose letters decry Salzburg with its “coarse, vulgar, slovenly court music” and tout Vienna as “entertainment enough.” Play Amadeus by typing in your name, which “Mozart” will compose as a melody. Then there’s Beethoven, Schubert, Johann Strauss Jr. and Mahler, noting strikes against him: “to be a German in Vienna and to be a Jew anywhere in the world.” Finally, pick up a baton and “conduct” the Vienna Philharmonic onscreen.

Vienna’s food scene is just as delicious as its arts, and just as varied in style and era. I cannot resist revisiting old favorites, like Griensteidl, a coffeehouse since 1850 where a caffeinated Schoenberg mulled over his 12-tone scale. Newspapers on sticks, red velvet draping the high windows, it’s a genteel place to linger (and the deep-fried fish with potato salad proved super.) Café Mozart, of 1744, is where the composer stopped for eine kleiner braun, but the decor has been updated to the early 1900s, with pink walls and plush upholstery. Grand people-watching, too. Gay-centric Café Savoy, near the Naschtmarkt, is a symphony of plush and sculpted stucco. 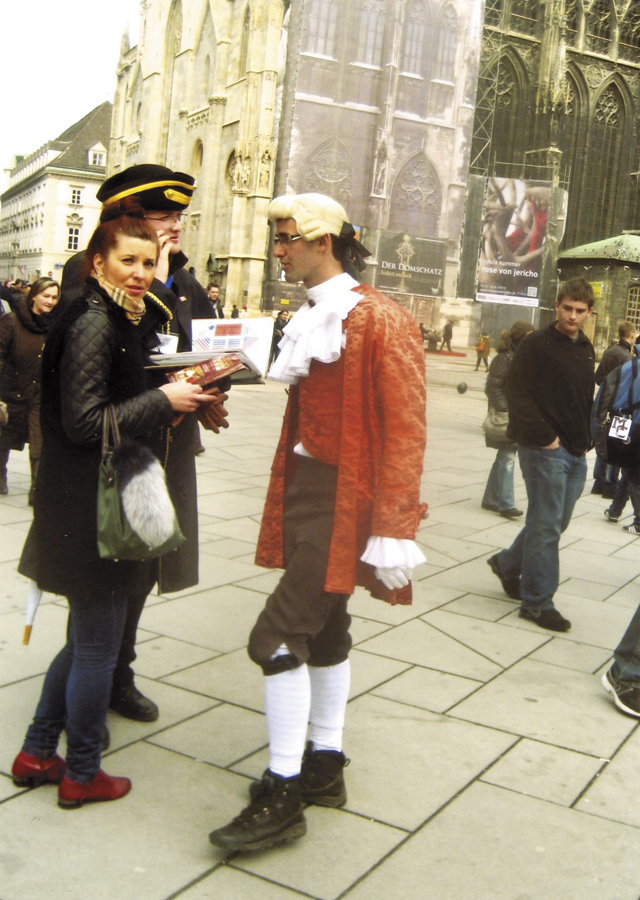 Ofenlach, near the Jewish Memorial, started life as a medieval Jewish cook house. A restaurant since 1704, it’s home to traditional favorites, like my salad of fried chicken livers and walnuts, followed by zander fish on homemade noodles, then a chocolate-poppyseed mousse. Schubert hung out here before me, so I’m in good company.

On more modern notes, I love—love!—Vestibul, housed in the ornate foyer of the Volkstheater, where foodie- fave chef Christian strolls amid the tables, complimenting me on choosing his signature lobster in creamy cabbage. Start with the irresistible square of beef tartare, husky truffle slice, and foie gras mousse. Then try Christian’s light version of wiener schnitzel, or other updated classics. Just as forward, the stylish restaurant inside the MAK, where another star-chef infuses classic fare with modern twists, such as pasta tossed with stewed cabbage, or goulash with bread dumpling and chilies. Gotta have the walnut tart with plum sauce.

Then on to two newly-opened hits: Motto am Fluss, owned by the “most known gay man in Vienna,” according to guide Alexa. Inside this “cruise ship” aside the Danube Canal, order updates like lamb tortellini in morel jus; arctic char with asparagus and wild garlic pain perdu; then, passionfruit dumplings with mango ice cream. Near the iconic Opera House stands the new Plachutta Gasthaus zur Oper, a skein of lively, modern rooms showcasing its specialty, wiener schnitzel, whose helium-light batter encloses tender, tender veal. Follow with kaiserschmern—puffy, powdered sugar-dusted pancakes served with home-stewed plums. Then, auf wiedersehen:  “till next time!” Plan your visit at www.vienna.info.

Civil marriage has been legal since 2010. Tie the knot at over 40 locations, from the giant Ferris wheel to the Schonbrunn Palace.  Annual highlight is July’s Life Ball, Europe’s most flamboyant AIDS/HIV charity event. The Rainbow Parade occurs two weeks earlier along the Ring Road, along with Pride Village. Gay cafes and bars are too numerous to mention, so check out www.gaynet.at for listings.