Timeless or trendy? Classic or unique? The questions that every couple faces when choosing their wedding bands are the same kinds of questions that designers must answer for themselves when they’re creating the pieces.

Both George Sawyer and Rony Tennenbaum have been marketing their wedding jewelry to same-sex couples long before it was seen as acceptable for businesses to support marriage equality, but each man describes their work differently. 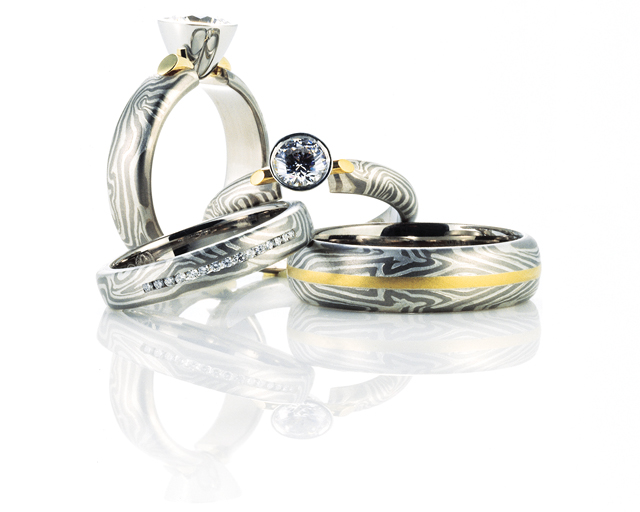 Just as each couple gravitates toward their own aesthetic, so too does each designer. Tennenbaum has been in the jewelry industry for almost 30 years and got his start manufacturing for the major retailers in the industry. Seven years ago, when he thought about creating his own jewelry, he already had all of the knowledge about sourcing jewels and everything that goes into making a high-quality product.

“The sad thing back then, when you would Google gay and jewelry, you would get only rainbows and triangles and these big gaudy pieces of jewelry,” Tennenbaum says. “The jewelry you saw is what a straight man thinks a gay guy would want to wear. Why is that the only thing available? As a jeweler and someone who has the capability to design and create jewelry, I thought I could do a better job.”

Sawyer, on the other hand, got started in jewelry in the ‘70s because he was interested in art and wanted to be a sculptor (despite majoring in the humanities while in college). “I discovered that jewelry is a sculpture on a small scale,” he says. “I made rings for several same-sex couples, though no one called them wedding rings or bridal then. A lot of same sex couples didn’t really talk about wearing wedding rings. it wasn’t anywhere near as common as it is now.” 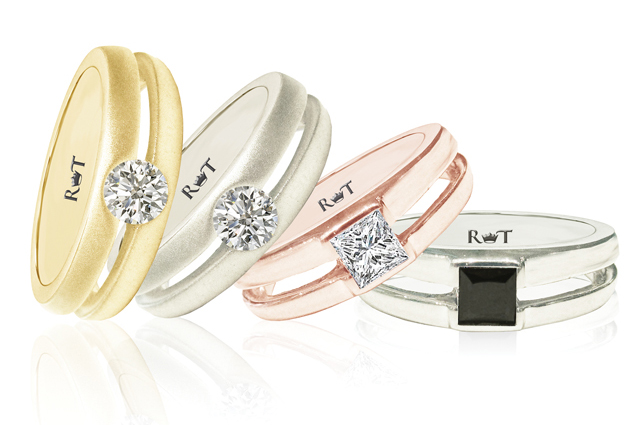 While Sawyer didn’t target same-sex couples in advertising or design, he did discover the community’s interest in his work. Tennenbaum, however, made an effort to design rings for his community, which he felt other designers were ignoring.

“I really felt strongly about two things: creating jewelry for the sentimental wedding niche and that connection with people,” Tennenbaum says. “I had been doing private jobs on the side and it is always a very intimate moment and I really wanted to continue that. I wanted my brand to bring that kind of happiness and personal connection with couples. I love that part, that connection.”

But that was then, at a time when the only outlet a couple had to find wedding bands was at a major retailer. Now the landscape is different from when the two men began their jewelry design careers. The community has changed, the world has changed, and the laws have changed. But both men have stuck to their image and what makes their brands unique.

Tennenbaum describes his work as fashion-forward with elements that are very sentimental (just take a look at his Tie the Knot collection). “I’ve evolved and my designs have evolved and the demand has evolved into more trendy and unique,” he says. “They want things that aren’t seen everywhere. I get inspired by a lot of things and fashion is one of those things.”

Sawyer, who describes his design aesthetic as “fine art jewelry,” takes a more artistic approach that has changed over time. “Most people are really familiar with what you see advertised in commercial stores, and they have a commercial look, and of course it’s pretty generic,” Sawyer says.

When he first started in metalworking, he developed an interest in Japanese metal work. “I developed a way to use those techniques in fine metals for jewelry. My work continues to evolve by being inspired by Japanese metal art and swords and then it gets to be self-fertilizing. When you start to do it, you get more and more ideas that you have to chase down.” 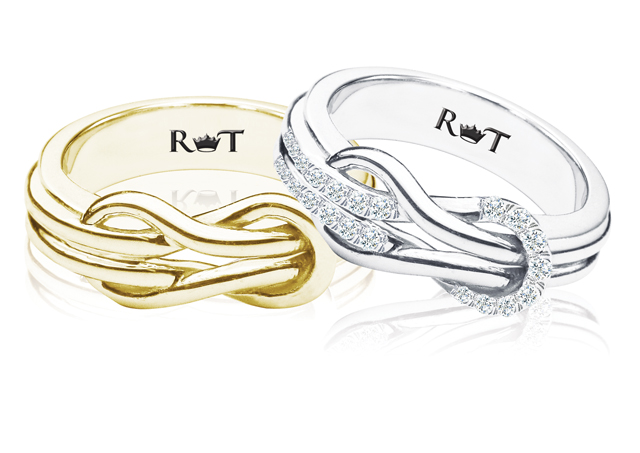 One thing the designers can agree on: a couple’s rings do not have to be perfect matches. In fact, they both enjoy the challenge of creating coordinating rings that have elements of the other while maintaining the individuality of each person in the couple.

As Tennenbaum says, “Maintain your individuality within your couplehood. Not every two people have the same taste in cars, furniture, or anything, so why shouldn’t it be the same thing for jewelry?”

Another thing both men enjoy: customization. Each designer gets a thrill out of working with a couple to come up with a ring design that suits them. That one-on-one interaction fuels their creative juices and truly allows them to imbue their work with sentiment, emotion, and the dreams of each couple.

That’s about where the similarities end. 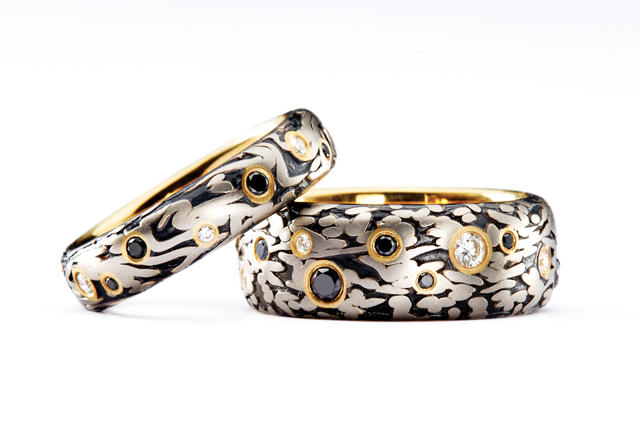 Tennenbaum works almost exclusively in matte finishes, diamonds, and gold or platinum. He won’t work with silver or other stones that he claims don’t stand the test of time. Sawyer, on the other hand, loves to incorporate color into his work. “For me, color trumps karat,” he says. “Color trumps everything because I work with colors. I like colored stones better than diamonds just because they have so much character. I like almost anything that’s unusual.”

But despite these differences, both designers are eager to see what the future holds for the world of same-sex wedding designs. Sawyer suggests looking beyond regular commercial stores and visiting designer sites (the American Jewelry Design Council is a good place to start). “It’s a good place to see real high-quality designer jewelry. Just get beyond commercial retailers and take a look around and be pleasantly surprised,” he advises.

With the advent of marriage equality nation-wide (thank you Supreme Court), the GLBT community finds itself growing into new wedding traditions. “We’re going to find that what we grew up with as tradition is going to grow and expand and increase in diversity and variety because we are more diverse,” Tennenbaum says. “Our niche also has people that have been together for decades and all of a sudden are allowed to be married. There will be many different scenarios in our community that will open up to us. As we grow into these things, we will see an evolution of the rings. Our generation will be about diversity; there won’t be a norm.”