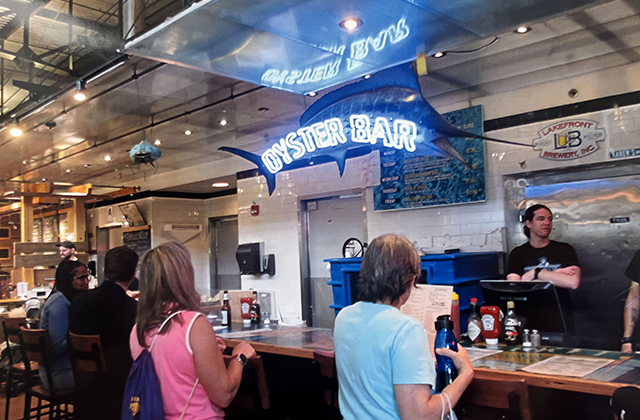 Someone let the genii out of the bottle.

When I lived in Milwaukee after college back in the day, the only fun to be had was an escape to Chicago for the weekend. Nowadays, Chicagoans in the know (as well as savvy Minnesotans) stream to Milwaukee for their glam getaways—seasoned, as only this city can, with a heavy sprinkle of gemutlichkeit. (That’s German for ‘friendliness,’ a virtue which—along with brats and breweries—the city’s early German immigrants carried with them.)

Those voting for glam will check out the design-driven Kinn Guest House, as high-tech a hostelry as I’ve ever encountered, while the gemutlichkeit lovers will find plenty of love to go around at the equally well-located Drury Plaza (free breakfast, dinner, and happy-hour drinks).

From there, it’s a five-minute stroll to the hipster-centric Third Ward, home of bars, boutiques, and galleries. At its landmark Central Market, an indoor haven of food stands, fresh off the plane I sped to St. Paul Fish Company for a lobster tail on a stick (heads up, State Fair!) and the year’s best Caesar salad. The building offers barbecue to sushi, burritos to French pastries –and that’s only within ten yards of the entrance, where a slushie shop also sells Brandy Old Fashioneds and Milwaukee Mules.

The market anchors blocks (and blocks) of indie shopping ops, ranging from Shoo, with footwear to cure the wallflower in you (plus sequined ankle warmers) to Untuckt (shirts) and n l suits for bespoke menswear; from Access (for access-ories galore) to the Modern General Store, harboring contempo kitchenware.

At Retique (a Goodwill store showcasing castoffs of the city’s millionaires), I snagged a snazzy Vera Wang number for less than the cost of a burger. I celebrated my victory at nearby Bavette La Boucherie, where I pampered my palate with chicken liver mousse crostini frosted with peach jam and blackberries, followed by one of the mega-sandwiches on which the kitchen rests its fame—mine, thick-cut pork loin in peach mole atop succotash, washed down by Wisconsin’s Central Waters’ Mudpuppy Porter. The farm-to-table sandwich list careens from Cuban to corned beef to Muffulettas and more.

After a fortifying meal like that, thank goodness for the River Walk that lines downtown’s waterway for miles, dolled up with flower boxes, flags and sculptures. As I meander beside the water, rowing crews vie with fancy pleasure boats atop the ripples. I trek from the high-style Third Ward to old-style Third Street, a throwback in time that’s home to sidewalk cafes like the Brat House, supplied by Usinger’s, the iconic old-time butcher right across the street.

Then it’s off in the opposite direction—south—for dinner at Morel, an anchor of the Walkers Point ’hood. Within its low-lit blond brick walls resides an open kitchen and platoons of cozy tables. From its locally-sourced menu, I dither between small plates like mushroom fricassee atop polenta or a salad of summer squash, feta, pine nuts, mint and chilies (Oh, what the heck? I order both), followed by a mélange of pork belly, bacon, chanterelles and corn kernels in smoky pork jus. And, for dessert (please, no food-shaming) a house-smoked ham biscuit slathered in honey butter. And those are just the starters: Were I a marathon diner, I’d have continued with entrees like the rabbit ragout on pappardelle. Or the lamb chop with Middle-Eastern merguez and tabouli with smoked eggplant aioli.

Calls for a beer. Long gone are the days when the iconic Milwaukee breweries of Miller, Pabst and Schlitz ruled the city (and the land). Lakefront, premier among today’s micros, offers tours that sell out for two reasons: 1) guests start the tour with a pint in their hands rather than waiting thirstily for the conclusion and 2) comics like Ben, our guide, injecting zany, stand-up humor in their recitations of Beer 101.

The endless Great Lakefront it anchors is scalloped with walking/biking trails along the park-like shore, centered by the city’s most-beloved icon, the Art Museum. Designed by Spanish star-chitect Calatrava, its snowy bird-wing arms spread open daily at 10 and noon, ready for its close-up by selfie-clickers. The art they enfold stretches from the Dutch Golden Age to Haitian Outsiders, but shines especially brilliantly in its cache of contemporary masters—Chuck Close to Roy Lichtenstein to Jasper Johns. Then applaud the design explosion of what ivory tower-ists sniff at as “applied art”: chairs by Frank Lloyd Wright, an IBM Selectric, a jukebox, an Evinrude boat motor.

Art at the Grohman celebrates paintings (oh, and don’t miss the larger-than-life sculptures on the roof deck) of mankind at work, from the building of the Tower of Babel to the building of the Autobahn: farmers, miners, even a tax collector (Flemish, 17th century) and piano maker (German, 1947).

The Public Museum invites guests to stroll the streets of Old Milwaukee, then peer into “homes” of its diverse immigrants. America’s Native tribes also get their due. More local history unfolds at America’s Black Holocaust Museum, whose founder survived a lynching attempt and false imprisonment.

For those who claim to be bored by museums, I dare you to snooze through these two: The Bobblehead Hall of Fame & Museum (the only one in the world) with 7,000 figures wobbling through all periods and genres (but heavy on sports idols)—from Marilyn Monroe to Mickey Mouse, RBG to Dr. Fauci.

Milwaukee is home to Harley Davidson, and the fabulous Harley Davidson Museum is home to hundreds of models since 1905, showcased year by year. It’s also a mini-course in American history, as bikes replaced ponies for mail delivery and transported everyone from policemen to wartime soldiers (“Uncle Sam’s choice,” according to ads of the day). Women hopped on in the 1920s, and Hollywood fed the charisma with films like “Easy Rider.” Also on view: stuntman Eve Knievel’s antics and Elvis’ bling-y custom model.

Nothing like a Harley hog to whet the appetite for the farm-bred variety. My final dinner, at Bartolattas’ Lake Park Bistro, commenced with pork pate and a silky chicken-liver mousse. I continued to nibble through the classic bistro fare of France, from garlicky escargot (how long has it been since you’ve spotted them on a menu?), mussels marinieres, and the onion soup of my dreams. The star of the evening was Dover sole meuniere—an entire fish filleted tableside, just like the palaces of gastronomy in Paris. Then a trio of dreamy, patisserie-perfect desserts: profiteroles, a creamy, almond-forward mousse, and crème brulee—reason enough (among many) to make haste to Milwaukee. To start planning, check out www.visitmilwaukee.org.

A Journey Through Milwaukee’s GLBT History

Brice Smith has created lgbtmilWALKee.com, a free app to download via the App Store or Google Play. Click on ‘Explore’ to view mini-documentaries covering 25 historic LGBT sites via three themed tours, to experience virtually or, as Brice and I did, on the hoof. We began at the site of the former River Queen Hotel of 1843, which re-opened in 1971 as an LGBT bar, complete with chandeliers and performers including Liberace and Carol Channing. Police harassment ended its run.

Then ‘meet’ Billie Herrero, a drag queen who channeled Gypsy Rose Lee. Check out the building that hosted the Black Nite, where a pre-Stonewall uprising exploded. Ballgame Town of 1974, known for wild parties, was launched as the first sports bar in the city, and the first to pay its drag show queens.

Today’s primo gay and lesbian bars, says Brice, are Le Cage and Walkers Pint in the Walkers Point hood and This Is It in Cathedral Hill. Pridefest has been held each June since 1985 in Festival Park—your chance to dunk a drag queen, among other hijinks.