I heard murmurings of a hot local band called Strange Names while finishing up my undergrad at the University of Minnesota roughly five years ago. This fantastic trio made up of Liam Benzvi, Francis Ximenez, and Fletcher Aleckson have since relocated to Benzvi’s hometown of Brooklyn, New York and are knee-deep in the production of their second studio album with Frenchkiss Records. In the past couple years, they have toured nationally, playing countless venues, and opening for the likes of Azealia Banks, Janelle Monae, and Yeasayer. Known for their “next-wave” sound, the band delivers hypnotic riffs and iconic pop-rock vocals that make you want to move. I was lucky enough to catch Benzvi for an interview before he set off for some creative exploration in Berlin. Benzi was refreshingly candid, with a charisma as evident in conversation as it is in performance. 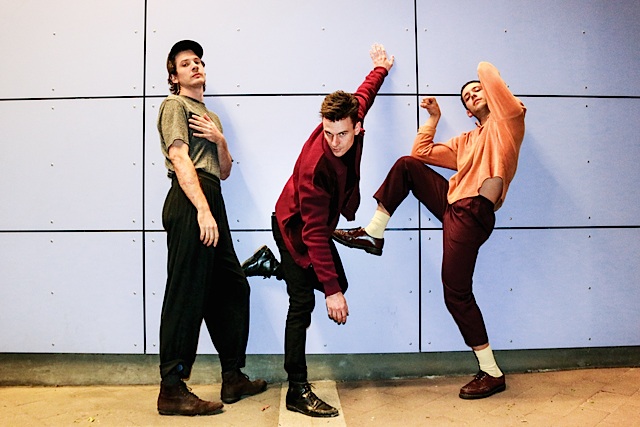 What’s new, Liam?
Liam Benzvi: We toured in the fall then had some down time in New York, some time to get to know ourselves a little better. We just wrote a lot and kind of went through a lot of emotions individually and now we’re ready to put all of that into a focused well we can all pull from for this next record. We already recorded an A Side/B Side in February so, as a physical release, we’re going to release that exclusively in the U.K., and then have it be a U.S. import, which is hilarious for an American band to do, but we’re silly. We just really are itching to go overseas at this point. I feel like what we’re making will resonate there. We’ve never been there as a band and we’re dying to go.

How do you feel this new album is going to be different from what we have heard from Strange Names before?
LB: We’ve been saying it’s going to be weirder. We’re all yearning to throw ideas at the wall and watch them fall. If we can give ourselves the freedom to do that, we’ll have a really good record. We’re feeling a lot freer and we want to hold ourselves accountable for every single thing that we do.

You graduated from the Guthrie’s BFA Acting Conservatory, one of the most intensive acting programs in the country. Have your experiences as an actor influenced your approach to being a musician?
LB: One hundred percent. You have to get up on stage and you have to address an audience. I feel like I’ve seen a lot of [musicians] be very introverted and you get bored when you see someone kind of uncomfortable, relying on the fact that they might seem brooding. I find that almost insulting. You pay to see a show and you should get a show. You have to be conscious of that. I find “cool” to be very boring.

Yeah, I think there’s a lot to be said for showing an audience gratitude in an authentic way.
LB: Last year I saw Savages play at Mercury Lounge. They were doing a bunch of small shows at different New York venues. It was one of the most powerful performances I’ve ever seen. The singer, Jehnny Beth, she looked everyone in the audience directly in the eye and would sing to them with such intensity. I couldn’t help but turn completely red and be completely engaged. That was right before we were about to tour with Azealia Banks, so I really took to heart what [Jehnny Beth] was doing. 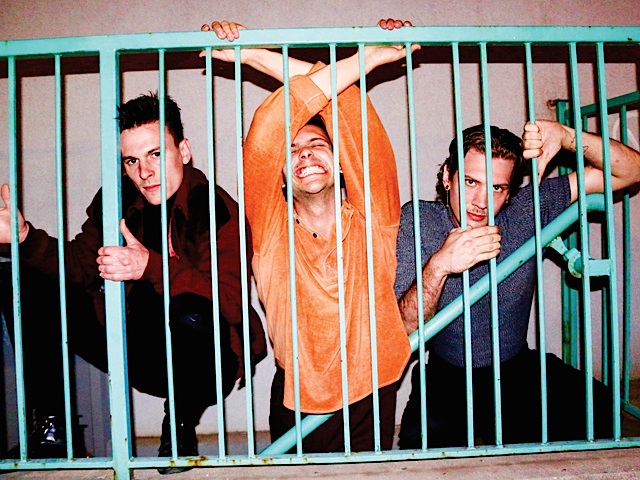 I love your music video for “Trespassing.” It’s very visceral, sexual, dark, and strange. How did that collaboration with avant-garde filmmakers, Anthony and Alex, come about?
LB: Anthony and Alex are fucking rock stars. They have a very clear aesthetic. They came and saw us perform and we spoke after. When anyone looks you directly in the eyes and has so much conviction with whatever their idea is, you kind of can’t help but fall in love with it, unless it’s just heinous. We really wanted to go for a very camp, very weird, grotesque video and they were willing to do it on a limited budget. So we went for it, drove to Jersey City to this crazy hotel and spent almost 24 hours there. We even saw this cycle of prostitutes and their Johns going in and out all night while we were filming.

Strange Names has been noted for having a throwback glam-pop feel. When do you remember first finding an affinity to ’80s sounds?
LB: I used to dance around my mom’s bedroom to Cyndi Lauper when I was a little kid and B 52’s I was all about. As I got a little older I got into Siouxsie and the Cure. I actually just got a Siouxsie and the Banshees tattoo on my arm. There was just something super cool about that [music], kind of glam, kind of goth. I didn’t see that in the ’90s.

What challenges have come about as a queer artist in a genre that is still predominantly heterosexual?
LB: I’ve never really cared that much about it, but I have been using the male pronoun as the subject a lot more. I’m into it. Being an actor, you want to be a chameleon. You have a lot of hostile people telling you to be a versatile actor and what they really mean is be heterosexual on stage. The conservatory program was a great experience, but it put pressure on me to distance myself personally from the music I was making. Since I’ve stopped acting formally, I’ve become a lot more comfortable with myself and what I want to express in my lyrics. Part of that is also that now I’ve been in a couple relationships. I’ve been totally obsessed with people and I’m like, fuck it, I’m just going to say him.