There are likely two kinds of people in attendance for any given performance of Broadway’s touring Hedwig and the Angry Inch: those who know what they’re getting themselves into and those for whom the smack-talking, genderqueer, wannabe rock star is something of a shock. 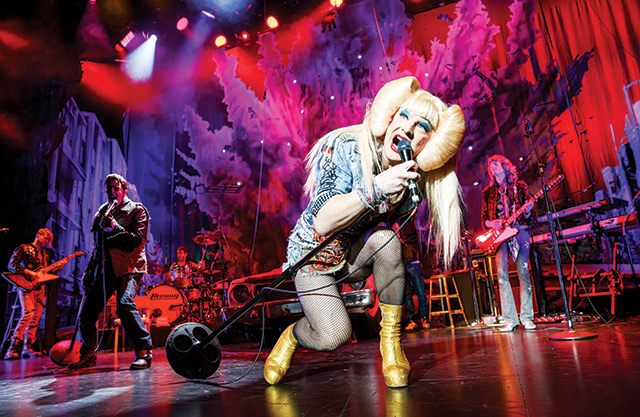 Audiences meet Hedwig, born a boy named Hansel in East Berlin, who fell in love with an American G.I. and underwent a botched sex-change operation to marry him and flee to the West. Now, years later, Hedwig is touring the U.S. with her band, the Angry Inch, as she tells her life story, and her tour dates coincide with those of an ex-lover/bandmate who ran away with her songs.

Euan Morton, stepping into Hedwig’s heels, says there have been some walkouts by people who “feel threatened” by this piece of theater, but on the whole the audiences have stayed. “The ones that you wouldn’t think should stay have loved it, so it’s been a really eye-opening experience in a way that I wasn’t expecting,” he says. “I thought we were going to get to Salt Lake City and play to a house of five people and it was selling really well and the audiences were on fire. I went in with some preconceived ideas about some of these cities and I’ve been wrong every time.”

Whether his audience is made up of “Hedheads” or unsuspecting theater subscribers, Euan Morton couldn’t be happier to have them along for the ride. His hope is that Hedwig, whose tragic story reflects some of life’s most universal truths, will touch them in an unexpected way.

“It’s the best thing I’ve done in my career,” Morton says. “It’s the most freedom I’ve felt on stage, the most well-rounded character I’ve played, and the most challenging role I’ve done. Of course I don’t always live up to the challenge, but it makes me do my best and try as hard as I can. It pushes me beyond things I thought I wouldn’t be able to do.”

That enthusiasm for throwing on some heels and taking the stage as Hedwig could be quite shocking for fans who know Morton was hesitant to take on the show’s salacious titular character. Morton says he was repeatedly pushed to do Hedwig after receiving a Tony nod for playing the role of Boy George in the androgynous pop singer’s autobiographical Broadway show, Taboo. But Morton dismissed the idea at first, wanting to avoid being pigeonholed for roles that involve makeup and heels.

“Now, of course 14 years later, I’m much more aware of who I am,” he shares. “And I’ve realized Hedwig is more than just someone who wears costumes and makeup and wigs and it was unfair of me to treat her like that. She’s a well-rounded human being who’s as dark and as wonderful as the rest of us and she’s an honor to play.”

According to Morton, who is Scottish-born but became a U.S. citizen not too long ago, playing Hedwig is especially thrilling now, of all times, in history.

Hedwig is often described as a character that’s more than what is seen on the surface, which Morton says is a wonderful thing to take around America right now with a lesson to not judge a book by its cover.

“I think that ultimately it’s a story about love: she asks these big questions about love and then goes on a search for the answer,” he adds. “She hopes (and I hope) that the audience leaves searching for their own answer having been inspired by her search. I think it’s a wonderful time to take a story about love out into this country performed by a person who is ultimately very different than most of the audience.”

The unsuspecting audience won’t know what to expect from Morton in a show that provides a lot of freedom for the performer, with ad libbing that gives Morton a chance to add his own flair to the character. But at the end of the day, Morton is trying to keep a sense of humanity in the character.

“She’s unmistakably human, and that’s where I’ve gone with the character,” he says. “That she needs to be liked and she needs to be loathed in the same way that we all do. I also think I play the divide between masculine and feminine a bit more, focus on both equally. There are moments where I’m able to walk across the stage looking like a beautiful lady with my high heels on, but there’s other moments where she is very masculine. And it’s not just moments of aggression, there’s also moments of masculine love, so that she is on the divide all the time.”

He is free to bring that sense of humanity and play up various aspects of the character because of who he is not. In a role that has been played by the likes of Neil Patrick Harris, Taye Diggs, and Darren Criss, Morton says his lack of fame means people come to the show to see Hedwig, not the celebrity, and he wouldn’t have it any other way.

“There’s no doubt in my mind that they’ve come to see Hedwig, because they’ve certainly not come to see me,” he laughs. “It’s wonderful for me because it gives me such freedom. I don’t have to live up to anything; I don’t have to live up to the person I am, there’s no Taboo stuff, or there’s no Sondheim on Sondheim stuff, or any of the rest of it. None of it matters. They haven’t come to talk about any of that.” 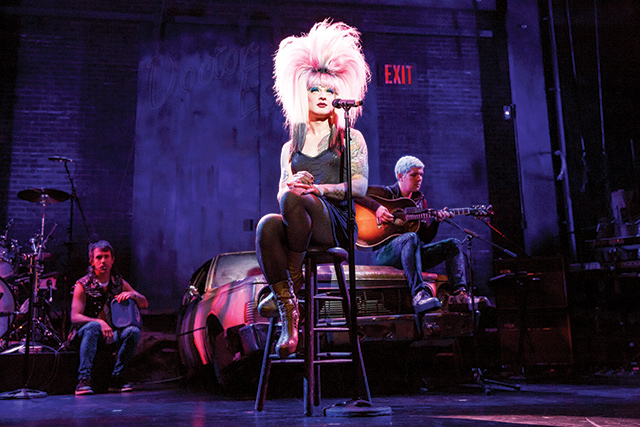 Though the audience members come without any expectations of Morton, they’re going to walk away having been exposed to a lot of his talent. Morton plays more than just Hedwig, as the nature of the show has Hedwig acting out other characters in the stories she shares with the audience. Hedwig is different than most other theater in that there isn’t a fourth wall, something that Morton is very used to, having traveled the country with different bands, telling stories and talking with audiences.

“I kind of feel a little like I’m home, this is something very comfortable for me,” he says. “I enjoy it; I think it’s very rare in the theater you get to play a character doing that, which makes breaking the fourth wall even more exciting because you’re in a piece, you’re in a performance, you’re in a play, and then all of a sudden you’re divining information from an audience. I don’t think this play would work if you had a bunch of actors playing the other characters and it was a play. The whole fact is you get to see a lot more of this one person in the genre that it’s written and the way that it’s written.”

That one-on-one time with Morton and the audience allows for a lot of learning: about life, love, and yourself, something that hasn’t escaped Morton either. Just as he admitted prejudging audiences, Morton says Hedwig taught him that everyone is the same.

“If you look at the fundamentals of love and hate and disgust and joy and all the feelings that can be felt by a human being, it doesn’t matter if you’re gay, or if you’re black, or if you’re a poor white man in West Virginia,” he admits. “Those feelings are ultimately all the same and it’s how we represent them in our lives that makes us different and that’s what I’m learning now. I wish we could see how similar we all are, because I believe if we all realize that, then we actually could make a difference in the world. We could choose to love each other, rather than hate. And that’s what Hedwig is teaching me and I’m hoping that’s what she teaches other people.”

Still not sure about taking a dip in Hedwig’s pool? Morton suggests going to the show anyway. He says, “If you need a night out that will reinvigorate your own beliefs or allow you to see the world from a different side, or forget having a reason, just come and see it. It’s not like going to see a million other things that you’ve heard of; it’s a really unique experience and it’s something I think people should have.”

Hedwig and the Angry Inch
Ordway Center for the Performing Arts
Feb. 14–19
www.ordway.org