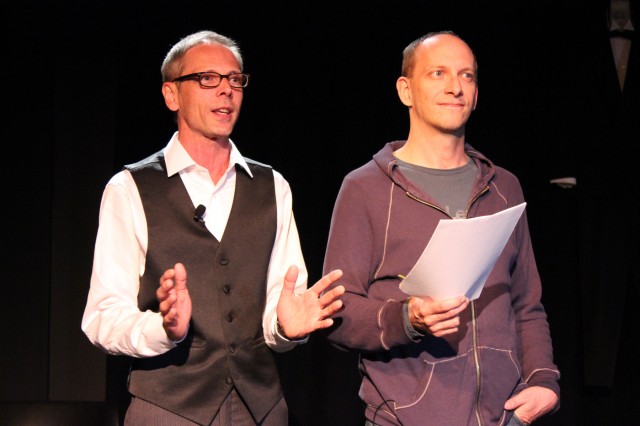 With the upcoming marriage amendment set to hit the ballots on November 6, it’s no surprise that everyone is trying to get a word in about “Voting No” on the proposed amendment. And it’s also no surprise that the hot issue of marriage equality inspired award-winning playwrights to write short plays about same-sex marriage for Standing on Ceremony: The Gay Marriage Plays. After its one-night Minnesota debut (on the same night that 40 other theatres debuted it across the country), Standing on Ceremony is back by popular demand at the New Century Theatre until June 16. This time, Wendy Knox of Frank Theatre directs a group of six exquisite Twin Cities actors who bring their own unique acting talents to the stage.

This production is different from traditional plays because it is a formal reading, meaning actors sometimes have scripts in their hands while they are performing. Don’t let this deter you, however; the high caliber of the acting and the text make this performance one which will completely enthrall anyone used to a traditional play.

The stage was bare except for some minimal furniture and wedding attire hanging on the backdrop—pairings of two tuxes, a tux and a dress, and two dresses. The simple design added to the honest, candid feeling of the mini-plays. Any more design would have deterred from the raw beauty of hearing the voices behind the marriage equality movement. 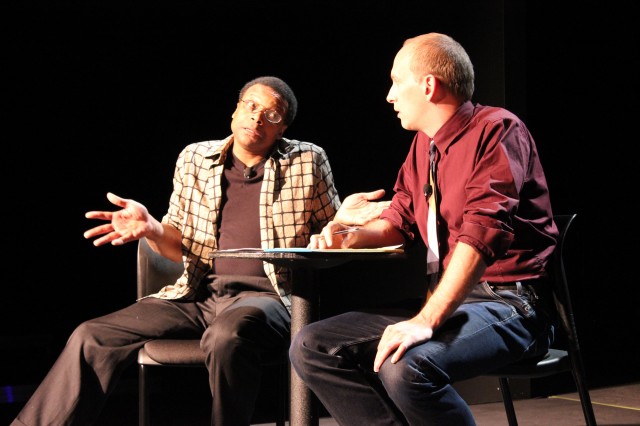 The Revision by Jordan Harrison starts the night off with a comical, yet thought-provoking analysis of the problems with traditional vows. Nate and Wallace, two men about to exchange vows at their wedding, attempt to revise the vows to reflect a marriage that is, for starters, not even legally acknowledged as a marriage. Though it sounds strange to say “lawfully civil-unioned or domestic partnered partner” instead of “lawfully wedded wife/husband,” this revision of the vows strikes a chord with anyone whose marriage or partnership doesn’t fit traditional molds.

Pulitzer Prize and Tony Award winner Doug Wright’s On Facebook clearly stands out as a highlight of the evening. The “dialogue” in this piece is taken directly from a Facebook conversation which occurred after one man posted a lamentation about same-sex marriage being banned. Conservative Beverly decides to express her opinions against same-sex marriage and is met with a flurry of furious responses. What follows is a war of words among faceless people, both for and against same-sex marriage. I found myself thinking, “I’ve had this EXACT conversation on Facebook so many times,” and, judging by the hysterical laughter of the crowd, most people in the audience had also had a similar experience. It’s this sense of a shared experience which really makes Standing on Ceremony superb.

On a more tender note, Moisés Kaufman’s play London Mosquitoes is a lover’s quiet, reflective contemplation of the loss of a long-term partner. Mark Rhein’s subtly nuanced performance as Joe  was so honest, so genuine, that I felt like I intimately knew both his partner and him by the end of the piece. With no doubt, this piece is the quietest, yet most emotional play of the evening. London Mosquitoes takes the evening into a darker, more intimate part of the soul and reminds us of the beauty and sorrow found in such a perfect love as Joe and his lover had. 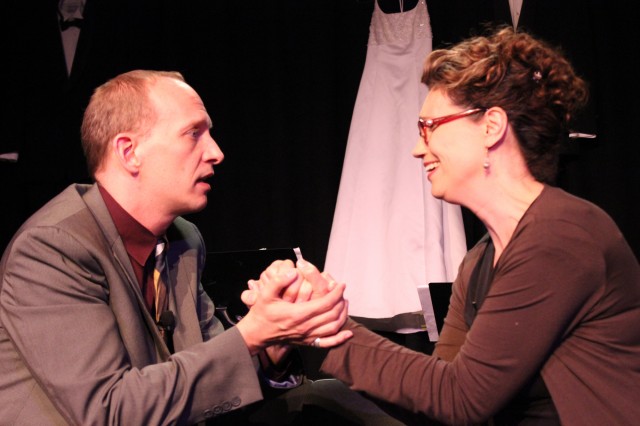 Though some of the pieces aren’t as strong as the others, (Mo Gaffney’s A Traditional Marriage was sweet but too long, and Neil LaBute’s Strange Fruit, though haunting, struggled to produce two cohesive story arcs in the time alotted), each play said something unique about marriage equality. As a whole, the plays provided the perfect balance of side-splitting laughter, gut-wrenching honesty, and loving tenderness which reflects the constantly changing emotional dynamic of marriage.

Standing on Ceremony is a must-see for anyone who cares about marriage equality. Both inspiring and honest, these short plays provide a night of entertainment centered around an issue very near and dear to our hearts: our right to love.

Standing on Ceremony runs through June 16 at the New Century Theatre in Minneapolis. Tickets are $25 each, and rush tickets are $15. For more information, or to purchase tickets, visit www.hennepintheatretrust.org.