Stalking the Don in Spain

I’m in La Mancha, and I’m channeling The Man.

That would be Don Quixote, hero of the saga penned by his creator, Miguel Cervantes, the Shakespeare of Spain. In fact, I’m gazing at those windmills—the “foe” (in the Don’s vision) against which he drew his sword. 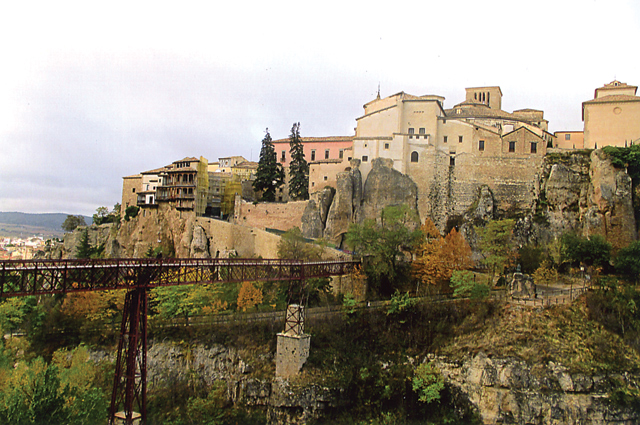 I’m drawing deep breaths instead, after the huff-and-pull to reach the pinnacle of the hill on which these 16th century windmills reside, along with the brawny medieval fortress-castle aside them overlooking the town of Consuegra. Both are open to visitors, and there are visitors aplenty today, for we’re in the height of the town’s annual Saffron Festival.

Saffron—one of the world’s most costly spices—flourishes in fields of the purple, crocus-like flowers that produce three tiny golden stamens each. They’re plucked from the blossom in autumn, a laborious task that turns into a competition during the festival as fingers fly amid lady champs from around the region. Troupes of dancers also gather to amaze us with nimble footwork practiced by ladies with glossy chignons, lacy mantillas and clacking castanets while their partners prance in espadrilles. Then we stroll Consuegra’s riverbanks, where the festival’s tailgaters offer us tastes from their wood-fired cauldrons 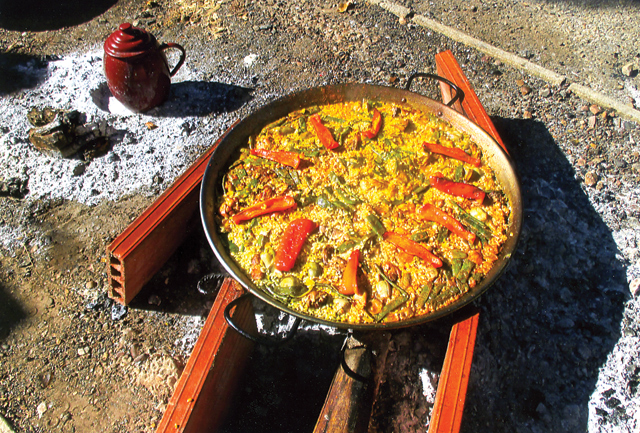 Saffron flavors the flan with which we end our lunch at El Alpa—a feast that began with slices of the region’s nutty Manchego cheese, and climaxes with cod in saffron tempura batter. That evening, in La Vida de Antes—a historic mansion-turned-intimate hotel—we swooned over a dessert soup of local almonds topped with saffron-flavored meringue. 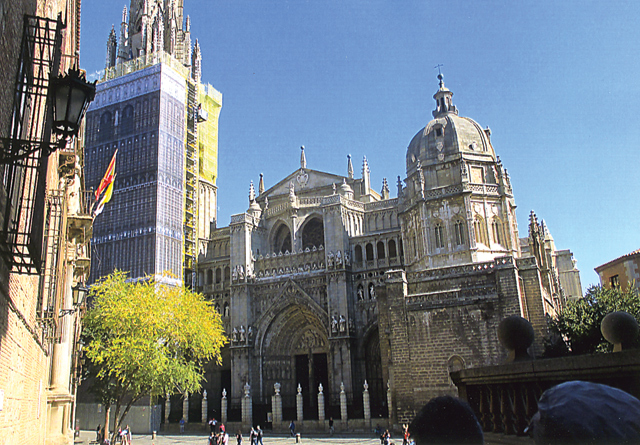 Toledo boasts what is considered to be the most magnificent cathedral in Spain.

We steal time to visit the town’s museum, detailing its history starting with Bronze Age findings, on to its Roman rule and artifacts, such as a comb for lice removal and chess-like gaming pieces, and those 16th century windmills. Then it’s on to Toledo.

An hour’s drive northwest (or half-hour train trip from Madrid), Toledo rises atop its mountain pinnacle like a medieval wonderland of spires and turrets. They’re crowded into a tangle of enticing alleys that lead, eventually, to the site that has lured visitors for centuries: Toledo’s magnificent cathedral, called the finest in all Spain. As well it should, for the city served as the country’s capitol when it was completed (at long last: It took 250 years) atop the site of an earlier mosque.

Inside, a gold-plated altar gleams below the Virgin making her way to heaven with a boost from six muscular angels. Her Son stands nine feet tall above her. Choir-stall seats break the tedium of hours of services with carvings of monkeys and mermaids. A gold monstrance, built from 20 pounds of bling, creates a holy photo op.. Don’t miss the sacristy’s wealth of paintings by all the bold names of Europe: Goya, Titian, Velasquez, Caravaggio, and 19 by El Greco, the city’s favorite son. 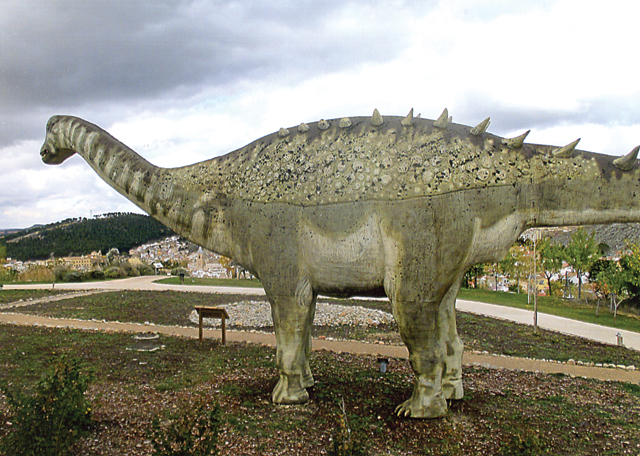 The real fossils of this dinosaur are enclosed in a concrete model at the Paleontological Museum of Cuenca.

You’ll find the painter’s most beloved work, however, in the tiny chapel of Santa Tome, where the artist has brushed his own self portrait amid a crowd of worshipers. You can visit his house as well (though it may be more of a ‘maybe’ than proven fact). On view are more-more-more of his eccentric, spiritual masterpieces.

Then stop by the Santa Tome Marzipan Shop for those sweet candies molded of ground almonds and honey. The size of a marshmallow, they’re shaped into fruits and painted, or filled with chocolate, and even a giant statue of Cervantes himself.

There’s another statue of the hero—this time, of bronze—guarding the Zocodover, the buzzy plaza that serves as the town’s living room. Our hotel overlooks the plaza and its twin dining lures: Burger King and McDonalds. Not to worry: The cobbled alleys leading from the square are crammed with cafes offering the Real Deal: saffron-flavored paella (my favorite national pastime) and tapas galore.

The city’s Roman ruins peek out everywhere. After them came the Jews, the Moors and the Christians, and many holy buildings contain traces of all three over centuries of repurposing. The prettiest mosque still standing is now the Christo de la Luz, brocaded with arabesques of stucco and renamed as a church.

Same goes for the synagogues in the Jewish Quarter: Synagoga de Santa Maria in Blanca was rechristened when Jews were forced from Spain in 1492 and remains still moving in its simple, white serenity. Nearby, the similarly-simple Synagoga del Transito of 1391 serves as a museum of precious Jewish artifacts.

A special treat: Event organizer Espadas Toledanas (www.marianozamorano.com) led us to a 15th century mansion adorned with treasures. Seated in the patio, we nibbled Spain’s classic appetizers, from Iberian, ham thin as tissue paper, to squares of nutty Manchego cheese, potato omelet, salty olives, figs. But the main attraction was a giant paella, which we watched apron-clad ladies stir patiently, adding tiny clams to enrich the seasoned rice. The historic home serves as a B&B, with balconies overlooking that magical cathedral.

Day-tripping tourists blanket this open-air museum of a city—two million a year, descending on a population of 10,000—but at night it’s returned to the locals—and you, if you’re wise enough to linger.

A three-hour journey east leads us to Cuenca, set upon a mountain peak to repel invaders. We bedded atop a cliff in Parador Nacional de Cuenca, which began life as a medieval convent (as is typical of Spain’s system of paradors, which have rescued medieval convents and castles to serve as modern hotels). It’s connected to the Old Town across the chasm by a bridge just made for a photo op. And for graffiti, such as “Mama, I’ll love you forever” and “I Heart God.”

Cuenca’s Plaza Mayor—main square—is unassuming by Spanish standards, and, like most, is anchored by its cathedral. This one is endowed with the first Gothic arches in Spain, through which light illumines the interior via stunning, modern stained glass windows.

Near it stands a trinity of museums, the first tracing the town’s history since Roman times. A second embraces the cathedral’s treasury of art: scores of modest Virgins and intricate Medieval tapestries. The third, the Arte Abstracto Espagnol—housed within the town’s famous hanging houses that project like balconies over the chasm itself—boasts a stunning collection of Abstract paintings. But my favorite anchors the top of the main street where, in yet-another former convent, the Fundacion Antonio Perez shimmers with a contemporary collection that’s often as playful as avant: a coiled rope topped with mini-skulls, portraits bearing crushed Coke can eyes.

The newest museum in town is the Paleontological Museum of Castilla-La Mancha, with its view across the chasm to the medieval city. Here, Cuenca’s rich trove of local fossils transports visitors from earliest times—tiny sea critters—to an ancient frog the size of a pig and a furry rhinoceros. Its mascot dinosaur, nicknamed Pepito, resembles a horse with a camel-like hump which wandered here 125 million years ago. Don’t miss the museum’s café, Natura, offering a glorious set menu including starters like croquettes with Iberian ham; creamy duck foie gras; and salmorejo, a gazpacho-like soup. Main course choice range from lamb to cod to, yes, hamburgers.

En route to our flight home, we brake for a final wow: the Segrobriga Roman Archaeological Park—one of the most vast and important Roman remains in Spain, discovered in the Fifties—where we tramp along a Roman road bordered with graves to the former trading center’s theater (“small but perfect,” instructs our guide); a larger amphitheater where gladiators fought off boars and bears; public baths (choose hot, tepid or cold); and the forum where business was transacted. Only 20 percent of the site has been excavated, so temples are yet to come to light.

Like those Romans, we’ll soon head home, rich with treasures stored in our memories rather than the plane’s overhead. For information, visit www.Spain.info.