Here’s a clue about eating in Germany: If it starts with S, it’s gonna be good: schnitzel, sauerbraten, sauerkraut, strudel. But the best of the best is celebrated only from late April till June 24, so mark your calendars. It’s spargel, the elite white asparagus whose arrival each spring is welcomed like the Second Coming — indeed, a taste as divine as anything heaven could offer. Special menus and festivals mark the season, and that’s why I’m in Düsseldorf, unpacking my napkin. 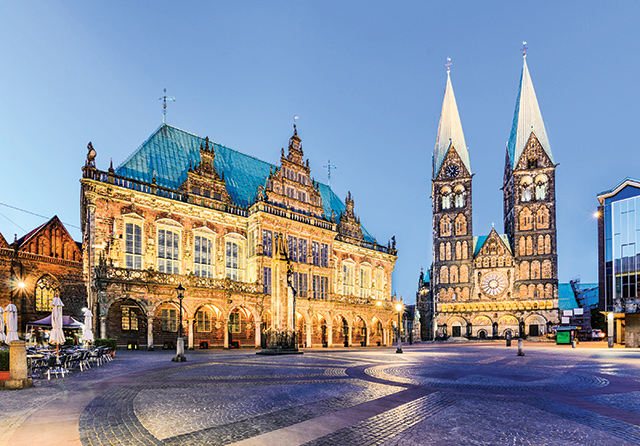 City Hall and the Cathedral of Bremen, Germany.

At the Kunstpalast (“the treasure house of the city”), its retiring director has scored a photo retrospective of his homeboy friend, filmmaker Wim Wenders, as his last hurrah. From K20 I hop a shuttle to its even more forward partner, K21, showcasing unsettling panoramas curated to challenge social views.

So I’ve earned my spargel. I’m overdosing on the classic version: inch-thick stalks, stacked like lumber and sided simply with boiled potatoes and, ahem, a dish of über-rich and dangerously delicious hollandaise (or go for the Weight Watchers version, melted butter). There’s a humming in the room. Oh, I guess it’s me.

Day two, it’s spargel at zum Schiffcheu, the oldest restaurant in town (ancient even when Napoleon ate here). Then a food tour through the Old Town, whose riverside promenade leads from a medieval tower to Frank Gehry’s starchitectural trio. First stop, Heinemann’s for upscale chocolate. Then Gagliardi’s sugar-roasted almonds; spices at Gewurzhaus; Senfladen for fragrant mustards; the minuscule bar selling killipitsch, the local liqueur, through a street-side cubby (just knock). We peek into breweries galore, capped by Uerige with its Art Deco murals and copper still. Finally, the open-air Charles Market: steaming brats and lentil soup amid the lunch-break crowd. 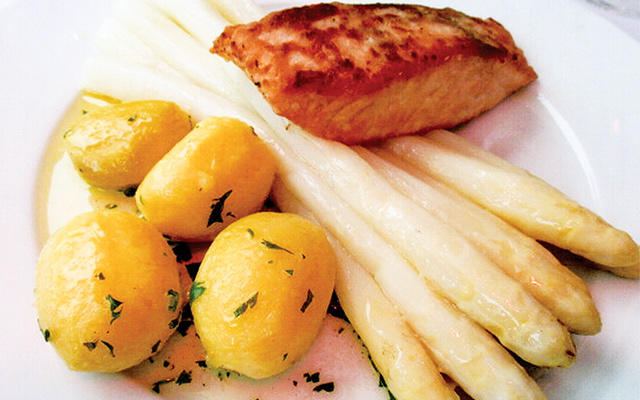 I’m off to Hannover for a single evening, but we make the most of it in the trendy, boho boys’ ’hood called Lindenblatt, dining on local fish with (this time) asparagus in aspic, then rhubarb cake at über-atmospheric Teestübchen. Next morning, off to tiny Nienburg, where spargel farmers flourish (see endnote), honored in a spargel museum(!) showcasing growing, harvesting, and dining tools (yes, special porcelain plates and silver tongs). A spargel fountain and spargel sculpture, too. In the town’s historical museum, I learn of its former stalag, where Russian prisoners of war claimed spargel juice sustained them.

In the Rathskeller below the medieval Town Hall, hemmed by half-timbered 16th century houses topped with storks’ nests, I dine on you-know-what; then, in the evening, in a charming riverside café, I sneak a taste of the luscious stalks as I claim the local pike-perch.

The on-time German train system is lovely — until it isn’t. I make it to Bremen just before the strike. Yes, that Bremen, of storybook Brementown Musicians fame, and there they stand, in bronze, anchoring the main square (toss a coin into a grate and they’ll honk, moo, bark, and cluck for you). There’s Roland, too, akin to our Lady Liberty — Germany’s symbol and nephew to Charlemagne.

The square (“our living room”) is where it all happens: the fabled Town Hall of Gothic superlatives, now a UNESCO treasure, with antique sailing ships floating from its ceilings in honor of its trading history. Beside it, St. Peter’s Cathedral, the Frauenkirche of 1032 A.D., and the lively outdoor market. I follow the cobbled street called Böttcherstrasse with its Art Moderne bricks housing trendy shops, and end up in the oldest (and most intriguing) neighborhood, Schnoor. In its tiny alleys, too slim for cars, nestle boutiques, galleries, cafes — nearly as stylish as the Art Museum with its precious paintings, Munch to Monet. Time for dinner before my legs fall off. Fortunately, I spy a beer hall with a sign announcing “Spargel!” 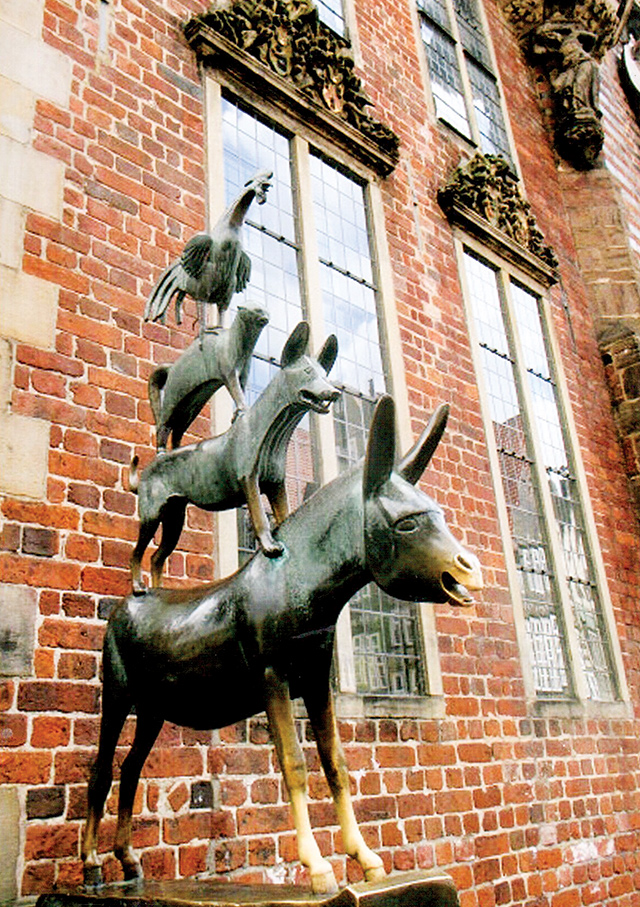 Beginner’s luck: There’s a rival train company that’s not striking, so I arrive in Hamburg to catch a plane home. But first, two precious days at The George Hotel, cleverly Modern British in its upscale theme, in the heart of Hamburg’s boys’ town. I fall off the culinary wagon at the see-and-be-seen Fairmont Four Seasons Hotel, gorging on homespun liver and bacon.

Both sit aside inner-city lakes, which is fitting, for Hamburg is all about water. Its heartbeat is its river’s industrial harbor (“our soul”). A harbor tour chugs us aside its floating behemoths, then anchors near the Fish Market, open for retail solely for early birds on Sunday mornings (it closes at 9:00 a.m.) for pre-dawn champagne and fish snacks after a night at, perhaps, the legendary Reeperbahn nearby — once notorious for its 24/7 brothels, but these days a streetscape of nightclubs (factoid: The Beatles started their career here).

As we lunch in the harbor’s St. Pauli neighborhood at contempo Das Seepferdchen — on fish, of course — my host unwraps his city’s psyche. “Time is money,” as I was oft instructed in this down-to-business city. “Hamburg is liberal, modest, and the southernmost Scandinavian city,” he paints its DNA. Today the harbor’s brand new icon, the Elbphilharmonie concert hall, is about to open. We dine in its shadow at CARL, a French-style bistro where Chef Michel Rinkert favors local seafood with Mediterranean touches. Okay, then: pike-perch with bacon crisps, peas, and oyster mushrooms, with a side plate (did I beg?) of spargel.

“Hamburg is a music city,” they tell me, but it’s got its share of visual art, too: The House of Photography, and aside it a hall displaying modern takes on Picasso’s works with canvases by living greats, from Warhol to Oldenburg (many reinterpret “Guernica” with a Vietnam theme). Meanwhile, the Kunsthall boasts the bold names of Art 101: Cranach to Renoir, Rubens to Hockney. And, more modern than them all is HafenCity, Europe’s largest urban redevelopment project, balancing high-rises (live, work, play) on acres of reclaimed land. 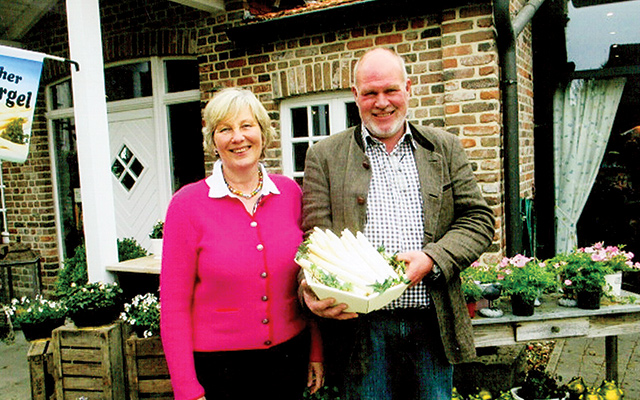 Time for the world to tune into Hamburg’s new image. It’s bidding for the 2024 Olympics. And should spargel-eating be declared a competitive sport, look for this gal to take home the gold. For your own adventure, visit www.germany.travel.

Spargel mania started in 1895, when a soldier brought the veggie home (it had grown in Egypt for 3,000 years). But, as often happens with exotic items, white spargel was the result of a happy accident. It’s white because it never sees the sun. It bests green, insists Herr Backer, who grows 350 tons a year: “milder taste, more tender texture, and…tradition!” He’s a member of the Spargelstrasse of North Rhine Westphalia growers, who produce 17,000 tons a year, sold at roadside stands, market squares, and restaurants.

A big deal? It’s like corn to Minnesotans: “A sign that summer’s here,” explains Maria Schultz-Kokelsum, who, with husband Georg, runs the Kokelsum farm, where we lunch on spargel, potatoes, hollandaise, and slim slices of ham. Newspaper reporters start calling her in April: “When? When?” like the anticipated birth of a royal heir.

It’s planted in foot-high tunnels of dirt and harvested by hand at dawn with what looks like a dandelion digger, demonstrates Herr Borman, “the Pope of spargel.” Then it’s power-washed in near-freezing water. Next, a peeling machine (saving home cooks the labor), and a conveyor belt for sorting by size (16-22 mm preferred) and color (French connoisseurs prefer a hint of blue in the tip; the Germans, nein) and sold as a luxury treat for up to $13 a pound until the short growing season ends.

“See that man?” asks Maria. “He comes in every day for spargel soup and strawberry cake: spring on the tongue.” How to cook it? “Swimming in water” with a pinch of sugar, salt, and lemon. Then, “Eat! Eat! Eat!” proclaims Georg. “It’s 90 percent water, so it’s good for you.” Adds Bormann, “It makes you beautiful!” Herr Backer provides a test for freshness: rub two stalks together, and they squeak. Another: look for beads of water where it’s been cut.

Among the farms clustered around Ibbenbüren, in Saxony, we visit the annual Spargelfest of Lobke Growers. Hundreds of devotees throng to tour the operation, treat kids to pony rides, fill shopping baskets, and applaud the oompah band as the Spargel Queen smiles. The buffet tables herald spargel in its many manifestations: buttery soup, atop pizza, rolled into crêpes, the star of salads, tossed with scrambled eggs, atop foccacia, within casseroles, snipped into risotto and, of course, stark naked, as god intended.