Spring Breakers Shows The Dark Side of Heterosexism 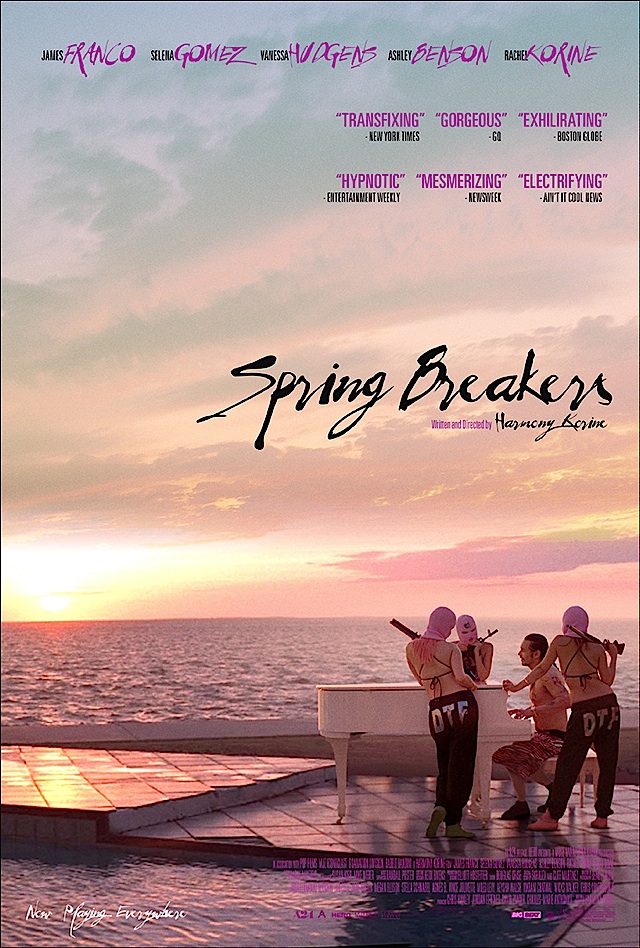 Not so fast! If you’ve written off Spring Breakers because you assume it’s some puerile sexploitation of Girls Gone Wild, check your predisposition at the door. Esteemed indie filmmaker has shape a searing examination of a clique of young broke college women who have not examined the economics, technology, gender politics, and judicial system they’ve always lived in. In being ignorant of these things they become the tragic agents of their own exploitation and horror. Ironically, we hear them call home in early parts of the film to say how they’re meeting all these wonderful new people and friends. They seem to be programmed to actually think partygoing is an experience where you develop meaningful relationships.

When this clique scrounges up the money to go to Florida for spring break it’s all hedonistic ecstasy – sex, flirtation, booze, drugs, undifferentiated music, and ultimately committing armed robbery with fake guns. It’s like a video game or an action movie to them. We are made to be aware of how their behavior parallels video games, gangsta motifs, action films, etc. Typically one thinks of such behaviour as predominantly male, but strike one up here for the social constructivists: our surroundings do influence us profoundly. So you probably can’t expect Oscar nominations for a film that cuts to the jugular of the commercial film industry. Korine is pointing clearly to the dark side of the entertainment monopoly that rules us all directly or indirectly. We are all slaves to consumerism. No different in many ways than these young women.

When an opportunistic, or some would say, enterprising, high end drug and weapons dealer, played with diabolical seductiveness by James Franco, bails them out of jail for the robbery, they become his property. Logically and realistically, things turn dark and treacherous for everyone. There lives become an unanticipated descent into hell. A masterpiece, a groundbreaker, and a seething indictment of heterosexism by a heterosexual filmmaker. Bravo Sir!