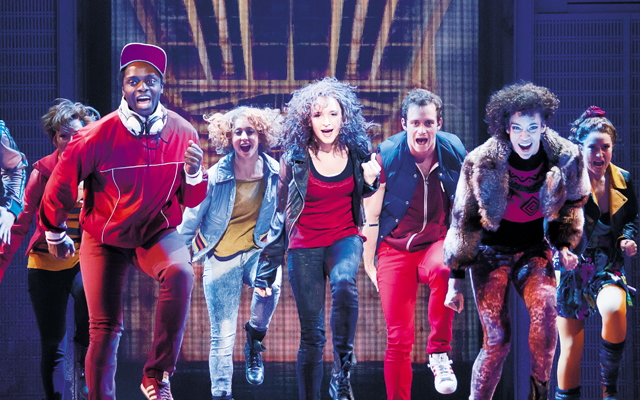 The pre-Broadway tour of the musical stage version of the smash 1983 film about working class dreams was actually a hit on London’s West End, which is that city’s equivalent to Broadway. The tour has played New Orleans and Nashville and after Minneapolis it’s on to Washington state. Reviews have been favorable. Dan Kohler, who plays Andy and ensemble roles, says, “From the minute this show starts until the curtain drops we’re flying high. Flashdance is overflowing with energy.” The show is clearly a crowd pleaser with strong feminist currents and blue collar consciousness.

Walker Art Center swings into action with two renegade film offerings about recent queer history that many of us may have forgotten or not even have known about. On April 12 and 13 iconoclastic Los Angeles filmmaker William E. Jones’s short films will be screened. They involve uniquely fascinating international material such as the rise of gay pornography when communism fell in the USSR, British perspectives, and the Soviets in Afghanistan.

On Apr. 17 Jim Hubbard’s feature documentary, United in Anger: A History of ACT-UP will screen and he will discuss the film afterwards. Hubbard shares, “The reason Sarah Schulman and I started the ACT UP (AIDS COALITION TO UNLEASH POWER) Oral History Project and the reason I made this film is that this history has been forgotten and to put the history of ACT UP and AIDS activism into the mainstream of US history. As long as there has been a movement of sexual and gender outsiders, we have had the responsibility to teach our own history to young people. I don’t think it should be entirely our responsibility, but if it’s to be done right, I’m afraid, we have to do it ourselves. There may be more ‘gay’ men and ‘lesbians’ in mainstream media these days, but they are the people or the characters who serve the assimilationist purposes of those in power. United in Anger demonstrates how to achieve radical change in culture. That’s the kind of history that has to be shown more widely so that the older generation remembers and the younger generation learns what happened and what is possible.”

When asked about courage and ’80s activism Hubbard responds, “Courage grows out of the necessity and the urgency. ACT UP arose because so many people were dying. The problem is not a lack of courage. The lack of radical goals is the problem. The push for same-sex marriage and for the ability to join the army grows out of a desire for normalcy after the trauma of AIDS. I’m not interested in assimilation. I think society should change to accommodate us. That would make it far more humane. It still takes a great deal of courage to live an openly queer life in many parts of the United States and it certainly takes courage to live openly in many other countries. AIDS is a worldwide disaster because the model of neglect established by the Reagan Administration has been copied across the world. The bureaucratization of AIDS has dissipated the energy necessary to force the governments of the developed world to provide medicine and health care, to conduct the research and provide prevention services that would end AIDS. The political will to end AIDS is lacking. Grassroots activism can create the political will. The best lobbying the NGO’s can do is free up a little more money. United in Anger shows in great detail how to make political change. People need to take ACT UP as a model and figure out the strategies and tactics that work in their particular political situation, whether in the service of AIDS activism or any other progressive political goal.” 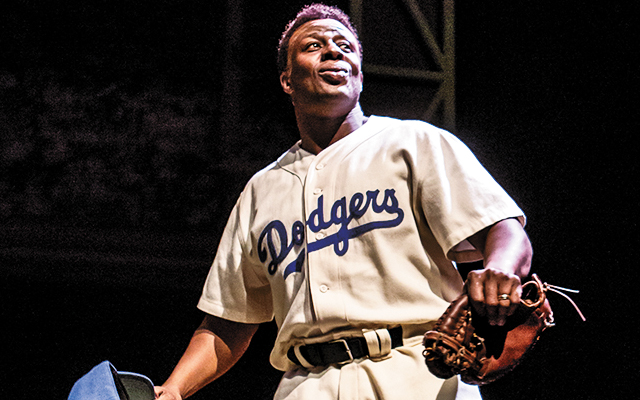 Jackie and Me. Photo by Dan Norman

When Jackie Robinson joined the Brooklyn Dodgers in 1947 he was the first African American to ever play major league baseball. Playwright Steven Dietz has adapted Dan Gutman’s book into a magical experience that will astound sports fans and anti-sports fans alike. Moreover, when so many civil rights success stories are made into formulaic preachy affairs, Dietz’s concept emerges as utterly inspired in comparison. Polish American schoolboy, Joey Stoshack (a dynamic Brandon Brooks), is mocked by other fellow baseball players for his last name and unfortunately, the adults lack the initiative and awareness, to correct the boys at fault. Understandably the taunts trigger Joey’s anger.

However, his upset is alleviated when he is assigned a black history report. Joey selects Robinson and time-travels to New York, 1947 where he appears to everyone as a black boy. Jackie (a magnetic Ansa Akyea) and his wife, Rachel (a lovable Dot McDonald), take him under wing while Joey works in the locker room and along with Robinson endures the racist arrogance of Dodger team mates. Although one, Pee Wee Reese (Adam Squalls), struggles to resist the other white guys. Watch for subtle moments in Squalls’s superb performance. The show astutely stresses the importance of controlling anger in the face of injustice. James Ramlet shines as Babe Ruth and baseball executive Branch Rickey. Vicki M. Smith’s scenic design captures the eras and spirit gorgeously. Splendidly directed by Marion McClinton. 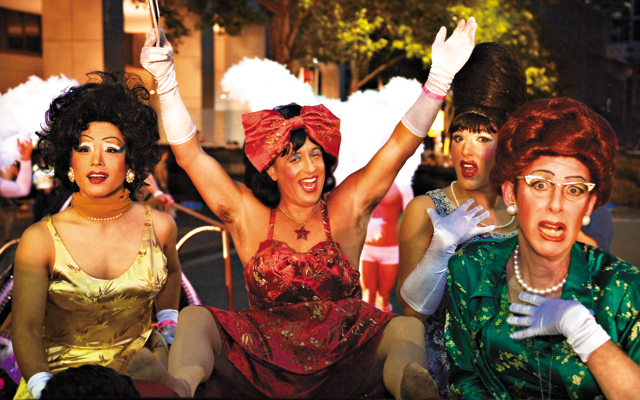 You may know The Kinsey Sicks, San Francisco’s legendary ‘dragapella’ beauty-shop quartet, for their appearance on Season Three of America’s Got Talent. They’re now celebrating their 20th Anniversary with a new musical tour which is playing downtown Minneapolis where drag is a time-honored tradition of course. The San Francisco Chronicle actually said that “their mangling of hit songs hits genius level.”

Irwin Keller is ‘Winnie’ and tells Lavender “For some reason America’s Next Top Bachelor Housewife Celebrity Hoarder Makeover Star Gone Wild! is selling more tickets than any of our shows in years. We don’t know whether this reflects the diminishing judgement of our fan base or a broader decline in popular culture. We prefer to take credit for both.”

The region’s premiere comedy theater’s latest is a feast for sports fans and anti-sports fans alike or anyone who has rationalized cheating in any form. And you know who you are. At any rate, Lance Armstrong’s scandal for winning several Tour de France competitions while doped up on steroids, is one of many examples of cheating the workshop actors have spoofed. Bobby Gardner appears throughout with at least one exceptionally noticeable bulge in his spandex shorts. That’s cheating Bobby! The difference between harmful lies and little white lies is thrashed out as well as the way some people illegally download copyrighted material on the internet. Tisk tisk!

Gardner and fellow actors Taj Ruler, Andy Hilbrands, and Lauren Anderson enact a vignette where two married couples have formed a book club but only one of them -Hilbrands- has actually read the book. The other three hilariously b.s. generalizations about plot and structure without actually saying anything about the content of the book. When Hilbrands calls them on it, he’s considered the bad guy. It could be a metaphor for the way we Americans and our government have come to scapegoat whistle-blowers.

At one point the actors, posing as barflies at a honky-tonk bring an unassuming audience member on stage to draw out their personal story of being cheated on. The member is treated to an impromptu whiny country tune that the actors make up lyrics to about the person’s bad experience. Their country vocal sound is absolutely spot on. Director Caleb McEwen and music director Peter Guertin have seen to it that each section flows seamlessly into the other. Dan Peltzman is this delightfully mischievous production’s technical director.