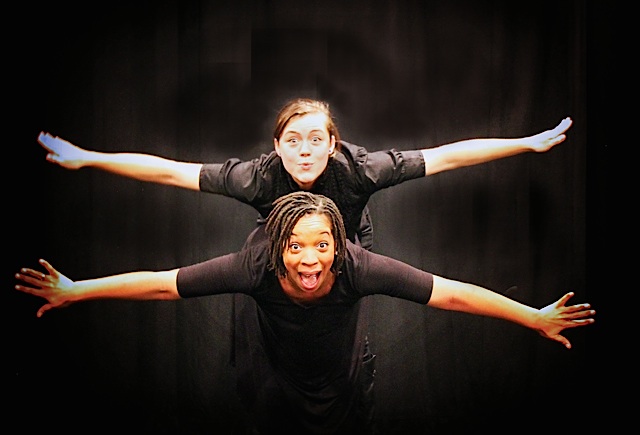 In 2002 the first African American woman to become a Pulitzer Prize-winning dramatist, Suzan-Lori Parks, set out to write a play a day. Four years later they premiered and played at different venues around the country. Fifteen years later Full Circle Theater Company is presenting a 2017 remix of these little dramatic nuggets. Co-artistic director Rick Shiomi, renown for his impressive directorial record with Theater Mu, says the plays are relevant today because of their attention to African American history, American history, relationships, and issues of gender and equality.

Shiomi adds, “With 365 Days/365 Plays, Suzan-Lori Parks gives us sharp and funny insights into this ‘Imperfect Union’ called America. And we are diving in with six directors and ten actors taking on 46 of her short plays. So it’s going to be quite a ride!” One of the directors is Harry Waters Jr., who was the original Belize in the Broadway production of Angels in America. 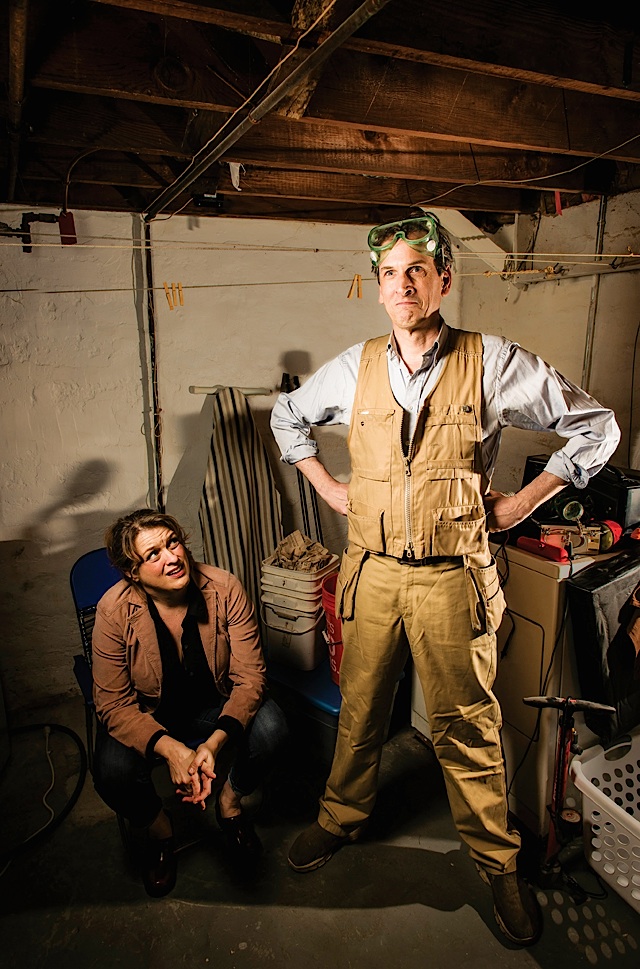 Up. Photo by Charles Gorrill

We love to know what makes those who push beyond the boundaries do what they do. In 1982 truck driver Larry Walters attached 45 helium-filled weather balloons to a lawn chair and was lifted 16,000 feet from his California backyard. Commercial airliners took notice and he drifted into the Long Beach airport area’s controlled airspace. Bridget Carpenter’s play about the man, titled Up, is a fictionalized meditation on the years in Walter’s life following this extraordinary event. Theatre Pro Rata is presenting this seemingly incredible story, that was in fact credible, at Park Square.

Director Carin Bratlie Wethern shares, “Up is a wonderfully bittersweet story about Walter (John Middleton), a man chasing a dream that has already passed. The play features the French wire-walker Philippe Petit (Mark Benzel) in Walter’s imagination, and we get to play around with magic realism and wire-walking. Fun for us in rehearsals and fun for the audience in performance.” 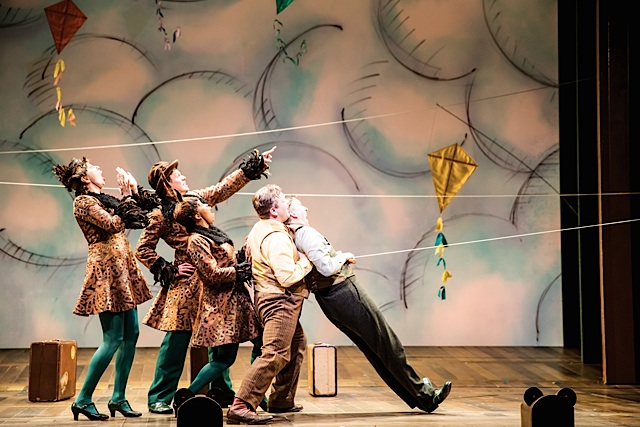 A Year with Frog and Toad. Photo by Dan Norman

I saw the original Chidren’s Theatre’s 2002 world premiere of  A Year With Frog and Toad less than two years before it transferred to New York and would garner a deserving Tony nomination for Best Musical. And I definitely enjoyed it. But now I don’t know if it’s me or not, or that a decade and a half have passed, but the current and fourth revival of Willie Real’s stage adaptation and lyrics, with music by his brother, Robert Reale, is essentially perfection in theater. An even greater production than the original.

Based on Arnold Lobel’s beloved books, A Year With Frog and Toad is a profoundly simple story of a frog and a toad who have a powerful natural bond and basic, typical experiences that they seize during the warmer months before and after slumber in winter hibernation. At first glance, you’d wonder what’s so dramatic about that?

The narrative includes ordinary events like modesty over being seen in a swim suit, the need to just be by yourself sometimes, and facing the fear of riding a snow sled. As mundane as these things may seem, the production has an uncanny way of making us present how deeply important these little moments are when we take time to notice them. Peter Rothstein has numinously directed the piece so that we apprehend the full richness of little moments and interactions. Every moment is significant. There are no catastrophic events or titanic showdowns, yet paradoxically, that’s part of its power.

The two title characters interact and observe as if they are being overseen by the universe, or nature, or God, or whatever higher power. Despite Toad’s insecurities we sense that all is right with the world, a great thing for children watching the show, not to mention adults. There is great love that permeates throughout and that emanates from the sweet chemistry of bonded male friendship in the performances of Reed Sigmund as overly sensitive Toad and Bradley Greenwald as the ever-poised and nurturing Frog. The two spark a charming symbiosis, something like Bob Hope and Bing Crosby.

The pair is vibrantly supported by a singing trio, like a Greek chorus, but with vaudevillian flair and a hint of vintage Busby Berkeley film musicals. They play birds and other creatures who definitely have attitudes about the world around them. Daniel Pelzig’s choreography capitalizes on this, often to hilarious effect.

Traci Allen Shannon utterly beguiles as multiple creatures. Matt Rubelke brings boyish vigor to his roles. And the night I attended, dance captain Elise Benson was covering for CTC veteran Autumn Ness, and she held her own seamlessly. The whole cast bursts with wonderful vocals that echo of various musical genres in a Broadway musical format. Music direction by Victor Zupanc is crisp and excellent. Martin Pakledinaz’s costumes are cleverly suggestive of wild creatures with larger-than-life personalities. 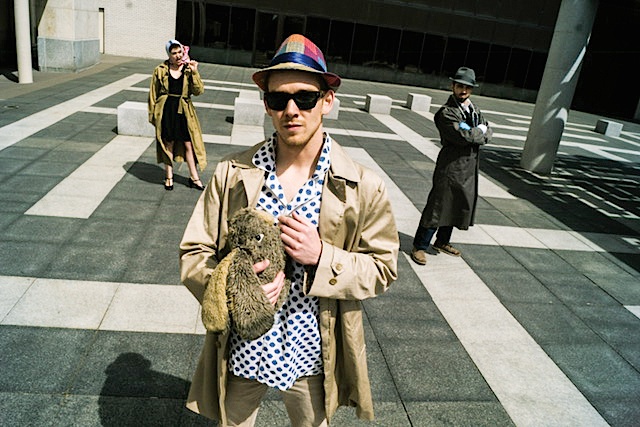 Paula Vogel’s acclaimed dark comedy came into being in the early 1990s as a response to her brother’s 1988 death of AIDS-related complications. The Baltimore Waltz is a metaphorical piece that imagines a European trip in which a sister and brother, Anna and Carl, seek out fleshly pleasures. They also seek a cure for an “incurable” disease that Anna contracted called Acquired Toilet Disease (ATD), a terminal ailment she got from toilet seats in the elementary school where she teaches. Obviously this spoofs the paranoid superstition rampant in the early ’80s that you could get AIDS from a toilet seat. Vogel gets even more in your face as both siblings are attracted to men and set out to bed as many of them as possible on their trip. In Anna’s case, this desire has become an unbridled passion despite the debilitating effects of ATD.

The Baltimore Waltz is a play shaped by unexpected choices that speak to the AIDS crisis that was still ferociously raging in the early ’90s, as well as a counter to the anti-sex feminism that had gained a foothold at the same time. It celebrates sex as a life force in the face of death. And as you may have guessed, The Baltimore Waltz probes into how we handle the inevitability of that undiscovered country called death.

Theatre Coup d’Etat’s revival has been directed by Lauren Diesch. She says the play is “Paula Vogel’s perfect, imperfect memory of her brother, Carl, and the fantastical trip to Europe they planned, but never took. It lives somewhere between fantasy and reality, between farce and tragedy, between the remembered and the imagined. At its core is love. Love between two siblings facing an unthinkable, but not uncommon event: death.” Diesch is also drawn to the play’s “exploration of how we cope when the world as we know it crumbles.”

Kari Nielsen, who plays Anna, says the playwright “manages to capture and verbalize loss in a way that is honest, beautiful, and utterly infused with love. I lost someone I love last year, and Paula Vogel’s text has verbalized things I struggle to find words for.”

The AIDS crisis of Carl’s time actually launched a rocket of desire for a gigantic shift in health care, both in its delivery and in its capacity to cure. Nicholas Kaspari, who plays Carl, points out that “The Baltimore Waltz clairvoyantly and comedically addresses not only the HIV/AIDS epidemic of the late ’80s and early ’90s, but also speaks volumes about the current healthcare political climate.”

Pulitzer Prize-winner Vogel is renown as a lesbian feminist dramatist but she has never been one to reject to so-called patriarchal arts canon out of hand. Note her forward for an edition of Thornton Wilder’s The Skin of Our Teeth. In The Baltimore Waltz she draws from the Carol Reed film noir classic from the Graham Greene thriller The Third Man, to create a man of mystery. Playing “The Third Man” for Coup d’Etat is Kip Dooley. He thinks his role may get audiences to consider our tech addictions/compulsions: “Are we more connected or more isolated, more authentic or more generic, more free or more paralyzed by internet-based technology? The Baltimore Waltz provides valuable insights to these questions with an entertaining, smart, and redemptive tale about family, loss, and self-discovery.”

Coup d’Etat co-founding artistic director James Stone says the play is about groups and individuals choosing to “dauntlessly resist, persisting against fear, and championing the right to pursue joy.”