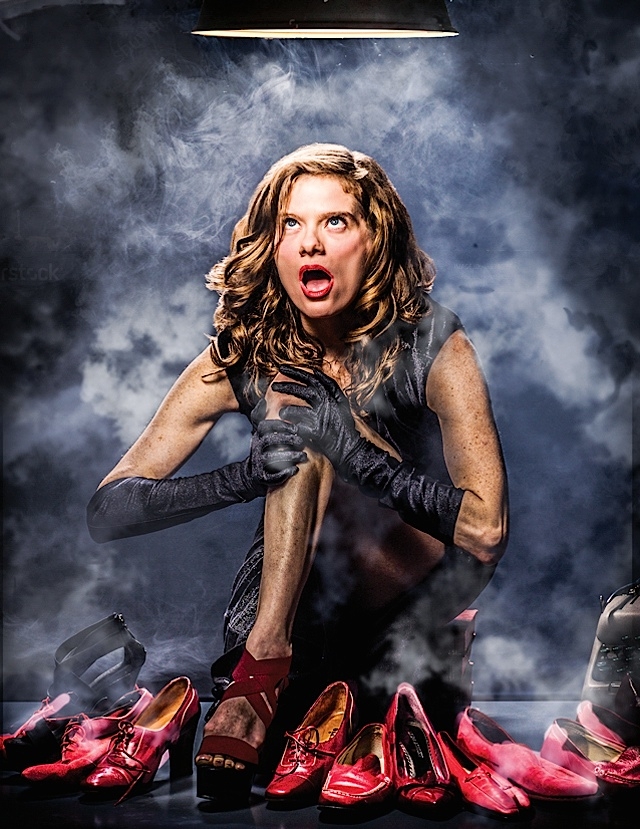 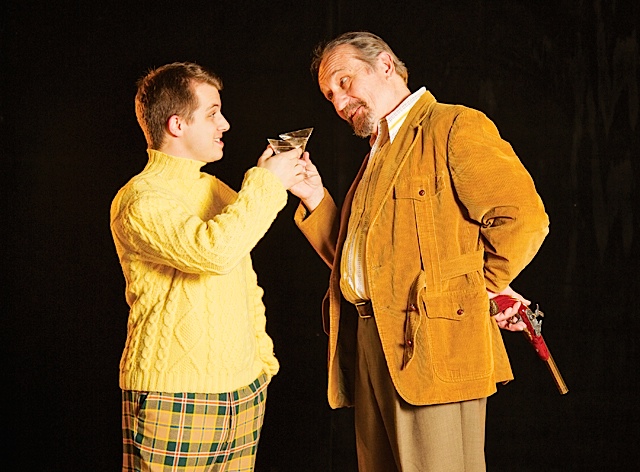 Ira Levin is best known for his horror novel Rosemary’s Baby. But his play Deathtrap was nominated for a Tony for Best Play in the late 1970s and also won an Edgar (Allan Poe) Award for Best Play. At the time, Deathtrap was a sensation in part because it portrayed a gay relationship between two men of different generations. It ran for four years on Broadway. Vincent Hannam and Charles Numrich play the couple in the current Theatre in the Round Players revival. It’s the kind of well-written play that TRP typically does so well. 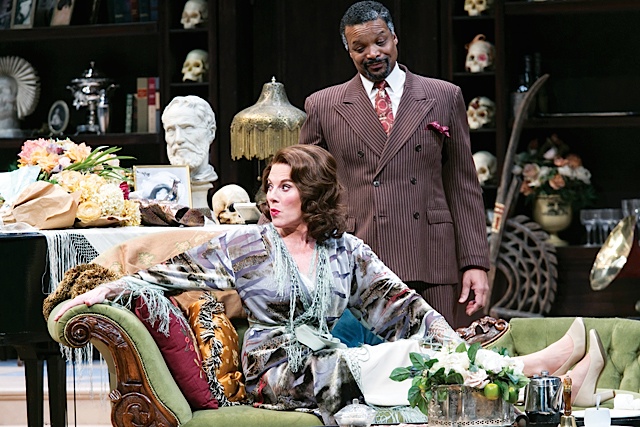 The Barrymores were the first family of the American theater in the early 20th century. Edna Ferber and George S. Kaufman spoofed them affectionately in their splendid 1927 comedy, The Royal Family. Renown New York director Rachel Chavkin has staged the piece with an eye toward the period, style, and spirit it is meant to evince, and at the same time Marte Johanne Ekhougen’s set is true to the period and class but introduces a skeletal design effect partway through that displays miscellaneous remnants of the Cavendish family’s past. It’s reminiscent of a theater storage room.

Of course, the Cavendishes are stand-ins for the Barrymores. The night I saw the show the pace began a bit sluggishly but it soon careened into the rollicking effect that makes for highly satisfying comedic theater. Chavkin gets marvelously exaggerated performances while still tapping into the central theme of a woman choosing between career and family. In 1927, this was groundbreaking and this topnotch cast makes you get a rich, textured sense of that as well as flourish and flair.

Michelle O’Neill is perfectly elegant as protagonist Julie Cavendish. She is fed up with having a life on the boards in sacrifice of a private life. Fans of the film gem All About Eve will recognize a similar issue with its protagonist Margo Channing played by Bette Davis. Elizabeth Franz as Julie’s elderly mother, Fanny, gives a winningly endearing performance. She still intends to hit the boards on a national tour no matter how rigorous. As long as there is breath in her body she will be a working actress! That’s her purpose in life.

Two seasoned Guthrie regulars sparkle: Bill McCallum is vibrant as a relation always cooking up some theatrical deal and Shawn Hamilton shines as Oscar, a theatrical money man who makes the family push the envelope in terms of both art and popularity.

However, two artists stand out most impressively, one as an actor the other for lighting. Matthew Saldivar is a mercurial vision uncannily reminiscent of a silent movie star icon. His comic timing is fabulous and his irreverent exposure of his body is sexy yet stays in keeping with the show’s madcap dynamism. You can’t help but love him in boxers and a raccoon coat! Bradley King’s lighting is simply inspired as he gorgeously enhances certain moments that other productions of the same play would likely miss. 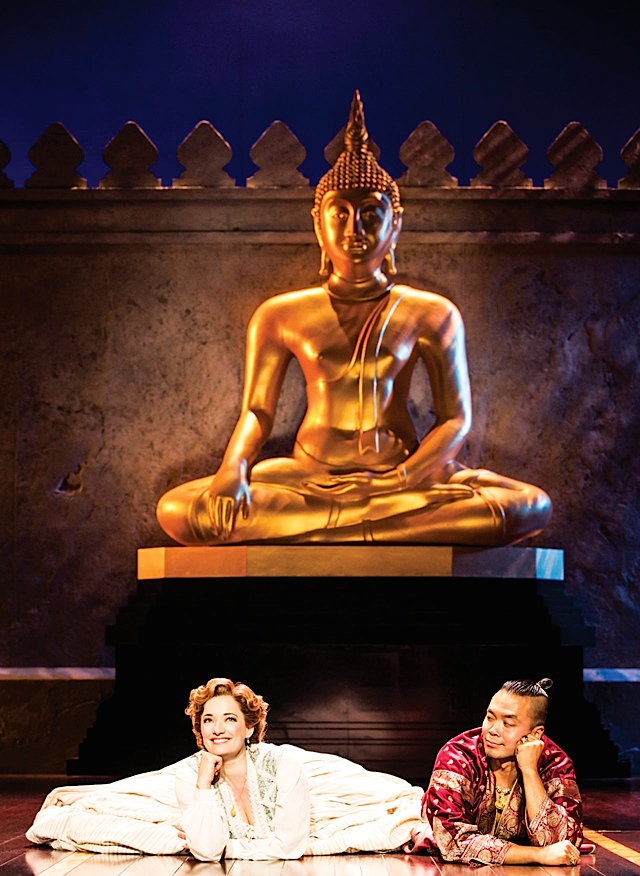 The King and I. Photo by Matthew Murphy

The Tony-winning revival of the 1951 Rodgers and Hammerstein classic plays the Orpheum on its national tour. Based on Margaret Landon’s acclaimed 1944 novel Anna and the King of Siam, its look at institutionalized misogyny in an Asian country in the 19th century is vividly contrasted with the feistiness of a widowed Victorian mother hired to teach English to the King’s children. Both the book and the musical are still considered to be multicultural works to be reckoned with.

What will be of interest to theatergoers who love Broadway shows that have toured the Twin Cities is that some of the same talent that created the astounding Rodgers and Hammerstein revivals of Carousel directed by Nicholas Hytner (Miss Saigon) in the 1990s and the 2008 revival of South Pacific are involved this revival of The King and I. Lincoln Center producer Ira Weitzman says, “Our approach, particularly under the direction of Bart Sher, is to revive these shows with as fresh an eye as we would apply to a new show, while being reverent of the material. The amazing thing about Rodgers and Hammerstein is that their work is still relevant and resonant to today’s audiences.” (Note: Bart Sher is also known for his Guthrie Theater productions.) 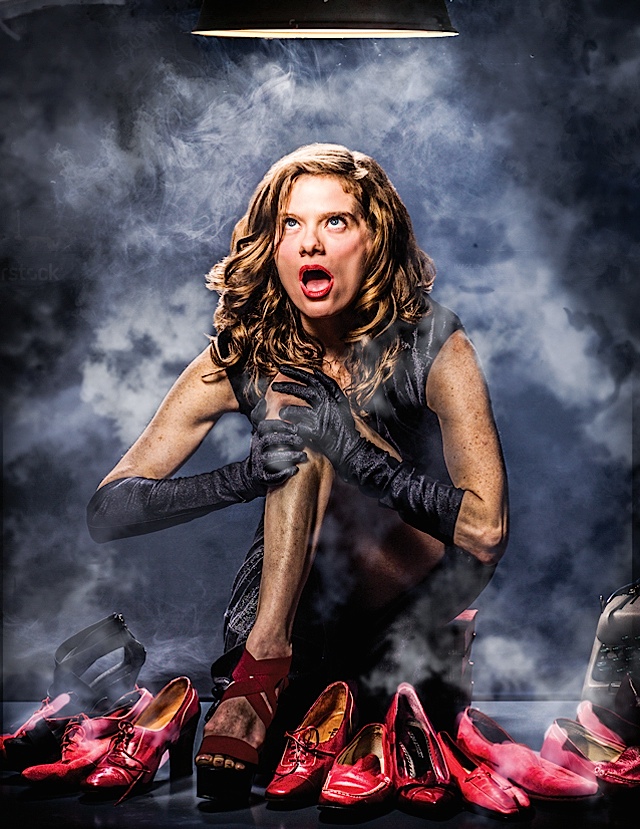 Hans Christian Andersen’s story of a haunted pair of red shoes delivered to a young girl’s doorstep is given a film noir treatment for the stage by director-designer-writer Joel Sass. Kimberly Richardson plays the role so that the effects of amnesia, multiple personalities, and what is real and what is not become central themes.

Sass shares, “I’ve always loved The Red Shoes for the idea of a pair of shoes literally taking control of someone’s body, and carrying them away on a series of adventures. It’s a prospect that’s both frightening and exciting. Plus, I have always liked urban legends about people buying haunted shoes in thrift stores. So those two interests have come together on this project.”

He adds, “I’m thrilled to be collaborating with the amazing actor-dancer Kimberly Richardson! She’s such a chameleon of character and voice, and we’re having a great time conjuring up the various inhabitants of a film noir apartment building.” 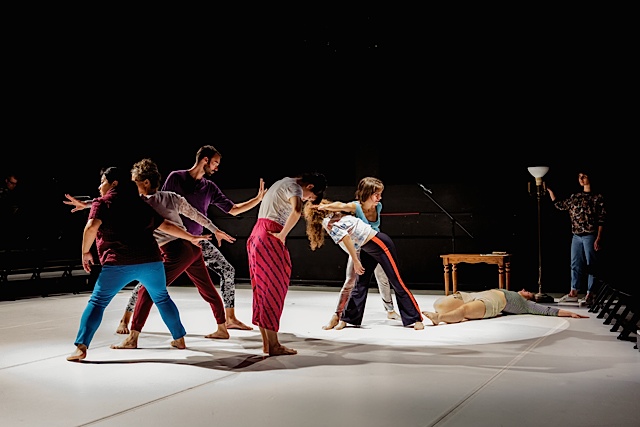 Still Life for the Cowles Center. Photo by Mena Burnette

Morgan Thorson choreographs a piece that breaks the rules, or as she puts it, “kills the choreography,” to challenge and undermine movement patterns. Out of this comes what promises to be a fresh new work. Thorson says, “The dancers are given the power to change the trajectory of the piece, and it’s different every time. It’s a flip of authority, empowering people to make changes on their own terms.”

She explains, “The dancers need each other to kill the choreography. They won’t all use the same strategies; some will interrupt movement sequences with cutthroat contrarian action, while others will strike a static, presentational tableau. To fully realize their rebellion and survive the upheaval, they must recognize and account for each other’s efforts in their own actions.”

This is a compressed 90-minute version of an on-site dance installation that played at the Weisman Art Museum in 2015. Thorson is renown for her experimental work. The Cowles Center has become a major dance center nationally.