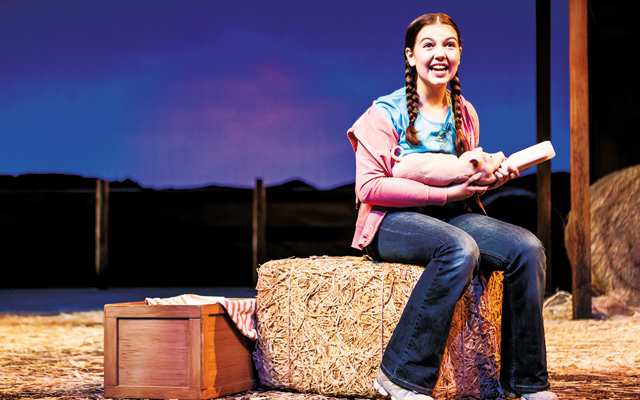 E.B. White’s 1952 children’s novel, faithfully adapted for the stage by Joseph Robinette, is a feast of terrific physical acting performances by humans playing nonhuman animals. Director Greg Banks is known for his very kinetic, almost bedazzling style, with Children’s Theatre productions of Robin Hood and Pinocchio, but with Charlotte’s Web he is more straightforward, and dare I say, realistic. At the core of the story is spider Charlotte’s willingness to rescue Wilbur the pig, from certain slaughter. No one says she has to save him, but she chooses to do it and in doing so she makes a powerful sacrifice. Some might call it unconditional love.

Joanna Harmon gives a poignant and superb physical performance as Charlotte. She repels from the rafters and creates a sweet friendship through dialogue and actions with Wilbur. Played with innocent sweetness by Ethan Davenport, he effectively has us consider the horror that Wilbur or any animal could go through in anticipation of being slaughtered. It will give meat-eaters something to chew on. Reed Sigmund brings swaggering seediness to Templeton, the rat who appears to have no scruples. All animal characters are vividly portrayed with animal characteristics. Joseph Stanley’s midwestern barn and fair settings are spot on. With Charlotte’s Web, CTC has shaped a rich comedy that makes us consider the anguish that ‘the other’ may be enduring. Especially if he’s awaiting the ‘privilege’ to be served at your dinner table.

In Roberto Aguirre-Secasa’s play, protagonist Ethan (Patrick Kozicky), comic book author and playwright, gets a privileged opportunity to write a Hollywood script. But he runs into major problems when he tries to please his dad, his boyfriend, and his agent. Kozicky points out that “Ethan is gay but his sexual identity isn’t a story line. In the show Ethan deals with stress from work, his relationship and his family. He is smart, funny, and flawed. Your root for Ethan because he is relatable to everyone. The fact that’s he’s gay has nothing to do with the story. It’s just part of what makes him who he is. Certainly we still have a long road ahead of us when it comes to equality but I am excited to find scripts that show LGBT characters dealing with life, rather than dealing with LGBT themes. I think it is incredibly important that we do our part to normalize sexual identity.”

You may recall Kozicky’s brilliant performance in Trista Baldwin’s American Sexy at the Minnesota Fringe Festival and the Guthrie in recent years. BOOM Theatre and its core artists have also created some hard-hitting theater that deals with issues of human intimacy and social expectations. Last year they presented Gemma Irish’s Engaged which looked at the idea of marriage. It was their part in the effort to elevate the discourse around the marriage debate. Obviously, Boom was on the winning side!

20% Theatre, admired for their impressive body of feminist and trans work, launches their eighth season with three sets of queer-oriented stage works. They peform at various times so you’ll need to check their website for that. If you want a serious look at gay history consider Donn Saylor’s performance as William Haines the gay silent film star, titled Pilgrim Soul: The Life of William Haines. When movie mogul Louie B. Mayer compelled Saylor to choose his film acting career or the man he loved, Saylor chose the man he loved. And paid the career price. Trust in Chaos by Nathan Gebhard and Kris Gebhard use poetry, marimba music, and dance as agents of healing. It shares the story of Kris’s two month stay in a hospital with a traumatic brain injury. The gay marriage crowd can take in Homo Hotdish’s I DO! I DO! and the Lori and Julia radio crowd who love to kvetch about rotten exes have Paige Collette’s Bitter Victory, Sweet Defeat.

There’s a stereotype that gay men are the ultimate opera lovers but Anna Sutheim’s Singing OUT challenges that. An image of the young lesbian is that she must necessarily be into Ani DiFranco, k.d. lang, and Tegan and Sara. But not everyone moves to the same tune. Sutheim shows how Strauss, Ravel, and Handel can be just as inspiring. Puck Matz and Juliann Prohofsky go magical with Catch a Falling Star about a lost little star and a lost little girl. In sum, when it comes to short stage works, 20% always delivers strong and provocative work. 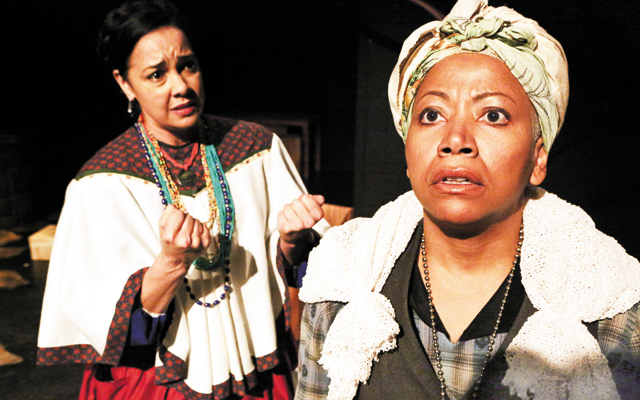 There’s a general tendency to sweep issues that crop up between marginalized people under the rug. It’s so much easier just to say that the rich white man is the bad guy and everyone beneath him is just a martyred saint. But the day that minority people – queer folk, persons of color, marginalized women- start to acknowledge and address their own internecine differences will be a day of exponential positive growth. Marion McClinton directs one of the most accomplished casts you will ever see on a Twin Cities stage. That alone is worth visiting Pillsbury House to see the production. Another good reason is that the play looks into the Native American/First Nations concept of two-spiritedness, wherein a person embodies both masculine and feminine spirits.

Playwright Marcus Gardley shares that two-spirited and same-gender loving themes are at the heart of his poetic epic about the emigration of a group of Freed men -Black and Seminole people- from Florida to present day Wewoka, Oklahoma. He says “without giving too much away, the two central male characters have a sordid love affair before their tribe migrates West but once they set camp in Oklahoma, this love is challenged and a riff is sparked between them. It was important for me to show how two-spirited love was celebrated in the past and how they grappled with the changing times once their tribesmen changed their view on sexual relations. This was primarily due to a change in religious beliefs. In a lot of ways this play is an illuminating account of a brief history and a call to action for our communities to unite against prejudice for the sake of the future.”

If you haven’t been to Minnesota Jewish Theatre you don’t know what you are missing. If you’ve stayed away because you are not Jewish, you are under a misapprehension. For more than a few years MJTC has been producing rich, complex, and entertaining plays at a high professional standard. Many selections reveal schisms within Jewish communities which anyone can find a side to relate to. Though homosexuality has been dealt with in previous MJTC productions, A Strange and Separate People by Jon Marans, is a unique perspective that should be seen by as many people as possible.

Nate Cheeseman shares that the play “explores the compatibility -or lack thereof- between religion and homosexuality. On the upper west side of Manhattan, my character, Stuart, begins the play openly gay and a recent member of the Jewish Orthodox religion. In the beginning, he believes that he can follow the laws of the Torah while still maintaining his sexual identity. However during his relationship with a fellow orthodox man he finds he cannot make the two work together. Stuart’s relationship with Jay ( Brandon Bruce) is compelling. Jay follows more or less the opposite journey to Stuart. Jay starts the play in the closet and married to a woman named Phyllis (Elena Gianetti). As the play progresses we see Jay emerge through his insecurities and become more and more open about his homosexuality.” Cheeseman adds that he loves working with the cast and director Kurt Schweickhardt.

Producer Barbara Brooks adds “the overarching theme of Jon’s plays tend to address self-discovery and struggling with one’s personal beliefs.” She expects the show to encourage discussion and hopefully, understanding and acceptance. Indeed, Brooks has been a champion of plays that do cause intelligent discussion and the quality of work at MJTC has evolved quite notably under her Producing Artistic Directorship.

Brooks understands that issues of gender and sexual orientation need to be a part of our larger social discourse. A discourse open to Jews and non-Jews alike.

Jennifer Blackmer’s new play takes on issues around being a daughter whose mother slips into severe dementia. At Theatre Unbound, the area’s acclaimed women’s theater troupe, Rebecca Yoho plays Joy, the daughter of George, actually played by two actresses, Kristen Mathisen and Carin Leonard Gorrill. Jamila Anderson and Eli Coats round out the supporting cast. For those who are, have been ,or will soon be starting to deal with aging parents, this is a must-see production. People may be living longer but having to struggle with disabilities exacerbated by aging can create a dreary time for both the suffering elder and those looking after him or her.

Director Mary Cutler reflects “mother-daughter relationships are fraught. Perhaps not a factual statement, but opinion, due to my location as a daughter. However, immense numbers of daughters -those with healthy relationships with their mothers or dysfunctional ones- connect around this very issue offered in our human being-ness. Especially our mothers’ life transitions brim with disorientation for both generations. As a daughter I desired to hang onto my mother’s familiar persona vs. facing the awkward role reversal she presented, for which I was as prepared for as living on the moon.”  Cutler directed Brazen Theatre’s vibrant revival of the gay comedy, Jeffrey, a few years ago. She also gave a bright butch performance in Theatre in the Round’s recent In the Restroom at Rosenblooms.