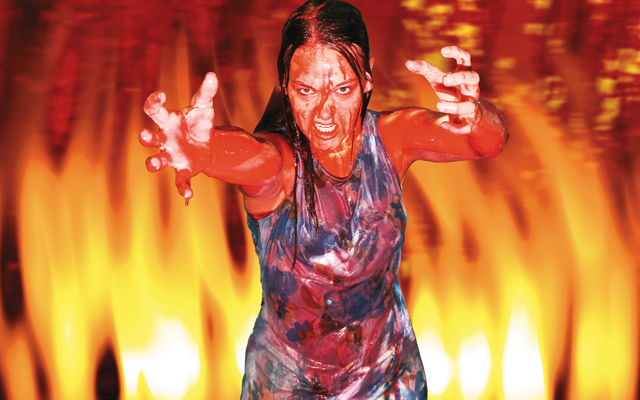 It’s taken a while but the 1998 stage musical version of Carrie that was met with a bizarre combination of derision and delight has finally transformed into a unified success thanks to the 2012 Off-Broadway revival that began with a reading of the revised script and score in 2009. Now Minneapolis Musical Theatre and Hennepin Theatre Trust give us the area premiere featuring Jill Iverson in the title role.

MMT Artistic Director Steven Meerdink relates “the original composers -Michael Gore and Dean Pitchford- and original writer, Lawrence D. Cohen, were engaged by director Stafford Arima to revise the script and score. Seven of the original songs were removed or replaced and the script was revamped to a modern setting and lifted more images from the original Stephen King novel. From what I can determine, the biggest issue with the original Broadway show is that it tried to be a BIG Broadway musical full of production numbers. The Off-Broadway revival scaled the cast back to a total of 14 and turned the focus on the characters and relationships. And, in changing the setting to the present, the show’s focus on bullying becomes even more relevant. I think the show needed to be ‘smaller’ and this is what was accomplished in the Off-Broadway revival.”

Meerdink concludes “this particular production is going to fit into the New Century Theatre space very well as it will keep the audience close to the action and, hopefully, make the audience feel more involved in the actual turmoil Carrie White deals with on a daily basis.” (It should also be noted that MMT is often masterful at shaping ambitious musicals into smaller spaces. They’re one of the best.)

Subtitled A New Musical that Give Fairy Tales the Bird! by Dennis T. Giacino, here’s a fun and irreverent way to reflect on those stories you were told as a kid and consider how they may have shaped or misshaped your world view and your expectations. Not that there’s anything wrong with ‘happily ever after’, but you sometimes want more scope into just what happiness is for you. Co-producer Jim Detmar says “there’s a song in the show called ‘Without the Guy’. It is sung by Mulan (Pegah Khadkodaian) and in it she mulls the distinct possibility that she might be a lesbian since Disney has written no prince to save her, provide for her, or fight her battles. It’s a very clever song.” 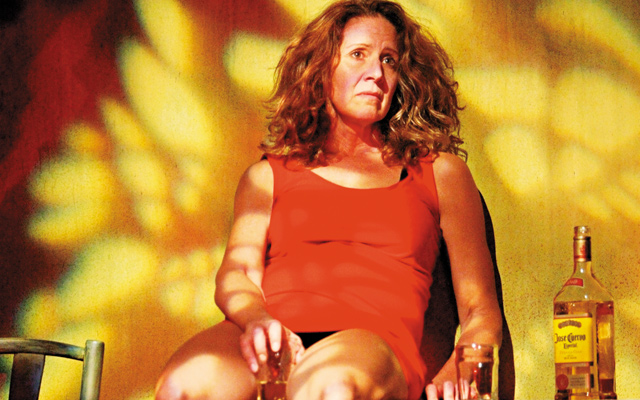 For years Jennifer Blagen has distinguished herself as a top-tier Twin Cities actress, but with Fool For Love she makes a gripping artistic breakthrough as May, a volatile woman who can’t quit a man she’s loved since adolescence for reasons you’ll understand when you see the Jungle’s marvelous revival of Sam Shepard’s now classic dark comedy directed by Bain Boehlke. Blagen tends to play classically poised characters and she plays them well. With May, however, she lets loose libidinal power that almost knocks you over.

The one May can’t quit is cowboy Eddie, played with equally libidinous impact by Terry Hempleman. For those who know and appreciate Hempleman’s work, you know there’s no actor around who can top him for mischievousness in characterization. He’ll have you grinning ear to ear throughout as he thrusts and misthrusts Eddie’s machismo at May and his naive rival, Martin, played with fitting innocence by Jason Peterson.

Anymore, most people think of Shepard as the superb gritty character actor of exceptional films like Fair Game, Black Hawk Down, Days of Heaven, and Mud. However, he is arguably the finest American playwright of his generation. Sam Shepard plays reveal white Americans in western states at emotional odds with changing landscapes -geographical, interpersonal, and emotional. (This conflict is emanated by Eddie and an ageing curmudgeon character played effectively by Allen Hamilton.) A gift that Shepard brings to the party is his searing insight into the collapse of the myth of the American West in the 20th century – a myth that still tries to revivify itself through the gun lobby and various gangs -white and nonwhite- wreaking havoc with drugs and weapons trade in western states and Mexico.

These are not the subjects of Fool For Love but the disintegration that Fool For Love taps into prefigures the wacky unbridled machismo we see so much of nowadays, whether it be mindless gun toters who rail against the government and ‘illegals’ but still want their Social Security checks, expanded military adventurism and sanctioned unwarranted wiretaps or the seething, darkly comic John McCain always on the verge of blowing a gasket because we haven’t entered yet another war since Bush/Cheney left office. Though masculinity can be a magnificently beautiful thing when manifested with dignity and goodness, it can sunder the fabric of relationships and social progress when it turns toxic and fixates on chronic unforgiveness. Shepard continually cautions us about this. It’s too bad that as many men who know his movies don’t know his plays.

This powerhouse musical is one of the most unfairly derided works of theater in the history of theater. For a couple of decades now, despite the fact that the show is still going, ardently misguided protesters, many of whom actually admit to having never seen the show, scream out about its alleged racism and misogyny. What’s odd about this is that the same protesters conveniently overlook that the musical is a blistering indictment of American militarism run amok and the horrific effect that militarism has had on women, children, and noncaucasians. Yet it has been stunningly mischaracterized as a right wing musical! It points more to the pick-and-choose and to-hell-with-context attitude many on the American Left still haven’t figured out. (We have seen this foolishness play out in the past few years with simplistic racially-correct attacks on The Help and The Butler, both of which are films to be reckoned with.)

Adding to the irony is that one of contemporary theater’s most iconic of images is of the helicopter sweeping in, signifying profoundly the humbling American defeat in Indochina. Many a dandy has pooh-poohed the expense of having the helicopter as part of the set design. But it is in itself a tremendous work of visual art that matches up with the theatrical art to sublime effect. Nothing in art more deftly symbolizes the vain waste of the Vietnam War. And for those on the right who bristle at the musical’s stern critique of American militarism, Miss Saigon contains an amazing scene that underscores the dark side of North Vietnamese communism. 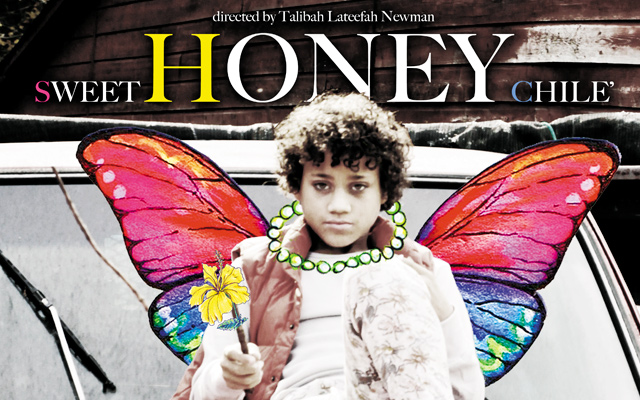 Minneapolis Underground Film Festival: GLBT Selections
St. Anthony Main Theatre, 115 Main St., Mpls.
(612) 331-4742
www.minneapolisundergroundfilmfestival.com
This year’s MUFF has three queer-themed films that you won’t want to miss. Minneapolis’s Lady Patra dazzles in Dazzle – The Donny West Story. It reflects on gender transition and doing drag in the 1970s. Talibah L. Newman’s Sweet Honey Chile explores identity and grief through a child’s eyes and was an Official Selection of the 2013 American Black Film Festival. Welcome to New York won the Best LGBT Comedy at the SENE Film Festival in Providence, Rhode Island. The St. Anthony Main venue has become an ideal space for film festivals and marks a healthy expansion of our favorite local underground film fest. It’s also great to see queer cinema represented along with other ‘out-of-the-box’ films. MUFF reminds us how we have become conditioned to the Hollywood/Wall Street Blockbuster Syndrome. Check it out and that in and of itself will be a peaceful way of ‘raging against the machine!’