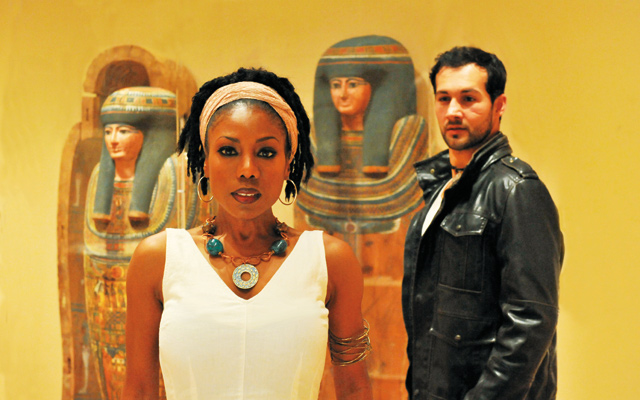 Austene Van recently impressed audiences in a major supporting role in the wildly acclaimed In The Next Room (or The Vibrator Play) at the Jungle. But now she’s playing the lead in the Tony-winning AIDA which launches Theater Latté Da’s ‘Broadway Re-Imagined’ partnership with Hennepin Theatre Trust. Van, who plays the prisoner of war title role, sees the Elton John/Tim Rice musical in terms of “the subjugation of an entire culture of people when an oppressive culture, perhaps out of the instinct to survive, is more than comfortable allowing ignorance and hatred to take the reins and overrun compassion and humanity – driving the urge to keep the other culture under foot to feel uplifted and valid as human beings.”

Van adds: “In the play, both cultures seem to have no problem with women assuming control and leadership. However, I notice the way the two cultures in the play accept how a woman is defined, perceived, how she functions, behaves, and how she is able to walk through the world authentically or not, are two very different ideas.”

Playwright Kate Robin is being produced again by 20% Percent Theatre Company Twin Cities, a theatre committed to female playwrights. Intrigue With Faye is part of an expanding body of plays dealing with electronic and digital experience. Facebook, iPhones, and Twitter, etc. help lead to automatic documentation of our personal activities beyond anything dreamed of a generation ago. That can be argued as positive, negative, or somewhere in-between. But, whatever you think, if we don’t see the pitfalls, such technology can wreck lives and that’s why this production is important. There are unprecedented legitimate concerns nowadays regarding privacy rights. For example, Senator Franken’s Location-Privacy Bill that would close mobile-tracking loopholes speaks to certain concerns which have–up to this point–been neglected by Congress.

Director Nicole Wilder says that Robin compels us to consider “what does it mean to be in a committed relationship? Essentially, opening up to another human being, and hoping they are opening up in the same way, leaves a person vulnerable to being hurt. What are the tactics we use to minimize the potential for hurt? How might such tactics actually hurt us in the long run? Add in the fact that, in this digital world of ours, near constant surveillance is not only possible, it’s probable, and you have a recipe for some seriously complicated and unhealthy interactions. For this reason, I believe the relationship problems that are brought to light in this production should be examined by every couple.” 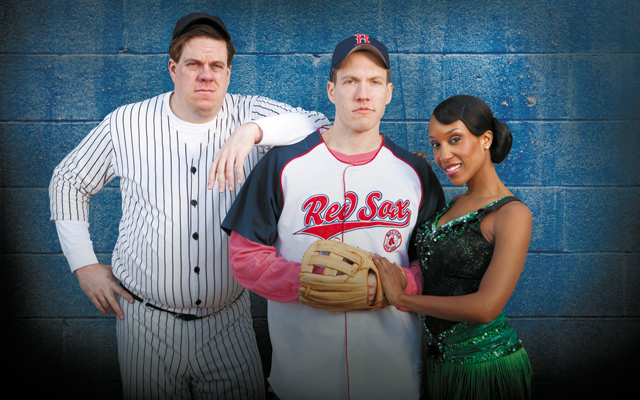 You’ve probably heard about the ‘Curse’ which is felt by some to have caused the Boston Red Sox to never win the World Series between 1918 to 2004. This 2010 musical written by Richard Dresser will appeal to those who are and who are not sports fans with its interplay of the Babe Ruth myth, superstition, interracial love, and various music traditions.

Music Director Denise Prosek points out that Johnny “is set in two distinct eras, 1919 and 2004. The music vacillates from the style of jazz night clubs to the contemporary Broadway sound. The historical perspective of the piece allows the characters to sing ‘good old boy’ tunes about the camaraderie of baseball players to choral booster songs much like Yale and Harvard’s a cappella glee clubs, while embracing the beginnings of jazz through the leading lady, Daisy (Timotha Lanae), a kind-hearted, strong woman intent on finding her fame as a singer. The music in the 2004 story line captures the modern style of musical theater or updates older music forms, such as the tango. Robert and Willie Reale (composer and lyricist) have created a score that ultimately finds the nuance through all their musical choices and yet still threads their own voices through the entire piece.”

Handsome Bryan West plays the lead role of Adam/Felicia in the premiere of the national tour of the smash drag film turned Broadway musical sensation. He sent a comment our way: “First of all, being an out gay actor in general, even on Broadway, is a big step for anyone to take. The same prejudices exist in New York as they do in Los Angeles. Will he or she be able to play straight? Will they appeal to a young audience, etc.? It is also very liberating and helps a lot with bringing down barriers while learning a character and not feeling like you’re hiding anything. Now with Priscilla, it’s definitely in your face. Not much hiding going on, but when you talk to a couple from Alabama, whom you saw dancing in the aisles and see how they related to the show just as much as the drag queen next to them, you know you’re doing something right!”

Even though it runs about 20 minutes too long, these Yale Repertory guest artists at the Guthrie put on one of the funniest shows of recent years. You’ll also see some locals in the midst of the madness: Sarah Agnew in a fun cross-gender turn, Steve Epp in top kintetic form, and Randy Reyes in whimsical support. This contemporary adaptation of Italian icon Carlo Goldoni’s classic 18th century comedy borrows liberally from references as varied as ‘fiscal cliff’ and Mary Tyler Moore. It combines Italy’s historic commedia dell’arte acting style that brings to mind the image of a harlequin, with today’s overwrought stand up comedy cult. But in this case, it’s not overwrought. Director Christopher Bayes has made it work hilariously in service of the show’s madcap cascades of mismatched interactions between the stock characters.

Epp, who was a core lead actor at the legendary Theatre de la Jeune Lune, plays servant Truffaldino who commits himself to two masters who are in the same town at the same time. He’s a dazzling powerhouse of slapstick comic timing and rapid delivery. He leads Bayes’s entire ensemble, a group that will make your head spin with its quick, impeccable delivery and stylish presentation. This show is comedy magic of the first order.