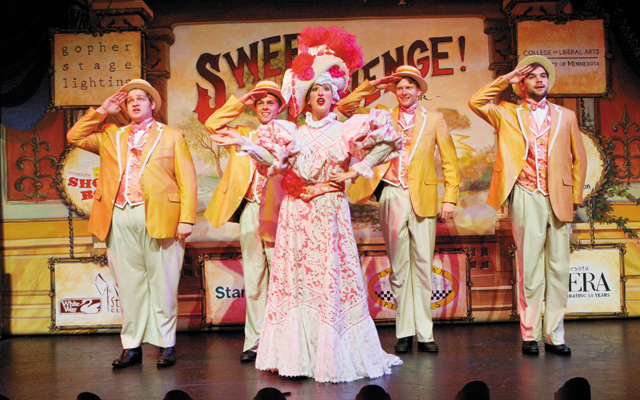 Sweet Revenge! (or No Mother To Guide Her). Photo by Michal Daniel

The Showboat’s annual melodrama performed by U of M students is a regional summer staple with its short musical numbers called ‘olios’. However, 2013’s staging of Lillian Mortimer’s Sweet Revenge! vividly directed by Peter Moore, is one their best traditional melodrama selections in many summers. The situation itself is ripe for booing and hissing the villain and cheering the hero and other good gals and guys.

Like any good melodrama there’s a deadly sin that drives the villain. In this case it’s greed. Bank robber John Livingstone is played with crafty assurance by Joseph Pyfferoen, along with his cohort in crime, Mother Taggart, a drunk whose mean streak definitely comes through Laura D. Hickey’s performance.

Rebecca Wilson and Christian Boomgaarden are sweetly sentimental as Rose and Ralph, a couple who must keep their marriage secret out of fear that Livingstone will blackmail the insecure Ralph for a perceived crime that Ralph actually didn’t commit. When you see the play the circumstances around this will be clear.

Maeve Moynihan delights as Bunco, described as ‘A Strong Orphan Girl’. You guessed it: she’s butch and likable, reminiscent of the Calamity Jane archetype. Nike Kadri and David Nando are lovably rustic as an interracial country couple that wouldn’t have been considered by most, if not all, casting agents when the play opened in 1905. But nowadays we know there were interracial couples in isolated parts of the US.

Actors Kevin Gotch, Allie Babich, and Bear Brummel also cut vivid melodramatic figures. Everyone’s vocals are solid in the olios with an ethereal Moynihan featured in a tribute to Chicago dance pioneer Loie Fuller (1862-1928). We get a glimpse into the reality that the turn of the last century performance possibilities could be innovatively modernist, not just melodramatic. Vern Sutton’s olio direction and Anton Melnichenko’s piano accompaniment perfectly suit the vaudevillian spirit.

If you’ve read Agatha Christie’s novel version, you may be surprised that she removed detective Hercule Poirot when she wrote the stage version. TRP dramaturg Angela Gross points out “the play is regarded as one of her most radical rewrites”. Director John Gaspard shares “when she transitioned from novel to stage, she made more changes than she ever had to the structure of her story. Not only did she re-write the identity of the killer, but also the motive; so people who had read the book won’t be one step ahead of people who haven’t. In fact, she kept in some clues from the old version, just to throw people off track. Plus we’ve found some fun twists and turns in the text.”

This is an especially interesting opportunity for Gaspard, whose own mystery novel, The Ambitious Card, will be released by Henery Press in August. He says mystery writing is all about structure and that Christie “had that nailed. Clues, characters, motives, means, opportunity, red herrings – like all the writers who have endured from the golden age of mysteries, Christie used all those tools to structure solid, involving, entertaining, mysteries.”

Everyone’s a comedian nowadays. Comics can stand up before a socially programmed audience -of which there are multitudes- that laughs simply at the mention of a dirty word, a bodily function, or a politically incorrect phrase. Simply being offensive and transgressive as ends in themselves are considered to be talented in many circles. (Please!) And of course, there’s always some reactionary who carps back that ‘it’s only entertainment! Don’t be so serious!’ Hence the person making the legitimate critical observation is ridiculed.

Well, guess what! Something can be entertaining and accessible and have craft. For example, solid slapstick comedy, which most stand ups could never master, is the ultimate populist entertainment. For a glowing example of this, catch If You Give a Mouse a Cookie at CTC. Two adults, Dean Holt as the Mouse and Reed Sigmund as the Boy, ricochet more comedy than the biggest barrage of bullets you’ll catch in whichever Whatever Action-Man Part Whatever Number you will catch at the movies.

However, be warned: Holt’s Mouse may turn your tummy and crack you up when you see what he does with marshmallows. You may go giddy when you see the Mouse make a major mess in the kitchen as he acts out a comic book story the unwitting Boy actively reads. This action-packed comic book sequence is as entertaining as anything you’ll see on the action movie screen this summer. And skating on scrub brushes has never been this fun!

Holt and Sigmund remind us what great comic imagination is. Imagination = great entertainment. What a concept! (It takes no imagination to say something crude at a comedy club.) Playwright Jody Davidson, who adapted the script from Laura Joffe Numeroff’s book, has created a text that demands first rate comic ability in order to create first-rate entertainment. And this show, brilliantly directed by Peter Brosius, is definitely that! 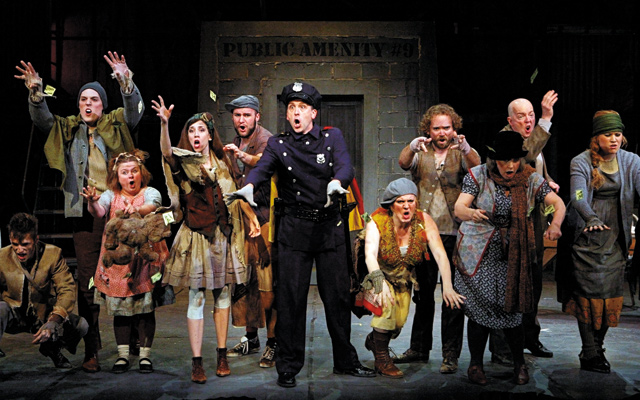 The global water shortage was fully known of when Urinetown first performed in 1999, but its current revival at the Jungle has arrived when the drought in the American southwest has coincided with shortages in the Upper Midwest, including Minnesota. In the Dakotas oil interests and some municipalities have been in serious conflict over this.

Serendipitously, the conflict between corporate monopoly and the average citizen is central to Urinetown, where going to the toilet has been privatized and public urination equals the death penalty. Kersten Rodau as Penelope Pennywise, a toady for the power elite, sings a spirited rendition of ‘It’s a Privilege to Pee’. Penelope, pound-foolishly, does her part to keep the masses from rising up, but sometimes you can’t keep ’em down. And such an uprising, which results in the abduction of an heiress, makes for a musical that has us consider the uncomfortable politics of the haves and the have-nots.

Hollmann and book-writer Greg Kotis are clearly at odds with corporate monopoly but they ultimately reflex to the trivial with the catastrophic aspects the show puts forth. It seems to promise a dark twist that master satirists like author Johnathan Swift or filmmaker Robert Altman built into their story structures, so that you experience both laughs galore and a chill down the spine. Regrettably, Hollmann and Kotis, didn’t go this route and it may be what keeps the musical on theater history’s second tier of major musicals, rather than the first.

Here’s another small MIA exhibit that goes right to the jugular. In a 1927 piece by Albert Decaris you can sense the sweat coming off the men. Titled ‘Miners’, the eye is drawn toward the musculature of men with bare torsos picking away and handling coal chunks. Bodies, beautiful. Situation, miserable, not to mention ultimately lethal. A section from Antonio Pollaiulos’s ‘Battle of the Naked Men’ engraving is shown to indicate its 15th century influence on Decaris.

In contrast, the idea of the muscular ideal as a source of empowerment, rather than a slide to disintegration, is seen in Rockwell Kent’s bold ‘Workers of the World Unite!’ from a 1937 engraving. Another International Workers tribute from 1941 by Kent bears a resemblance to the Mosfilm logo of the Soviet film industry. It was a time when the US and the USSR stood tall and united against the Nazis.

American master James McNeill Whistler, whose mother is an American immortal, is also represented in a hazy, dreamy etching titled The Forge. You can sense the heat and the smoke. Another master, this one from France, Edgar Degas, is also a part of this world of work with The Laundresses.

As for race, it’s intertwining with religious bigotry is shamefully exposed in a stereo card from the 1870s titled Heathen Chinese, The Miner, No. 1. A Chinese miner stands with his pick axe. Such cards were used to distribute to make a mean-spiritedly stigmatizing point. The MIA is right to make us aware of this part of history.