Community And Competition During COVID-19 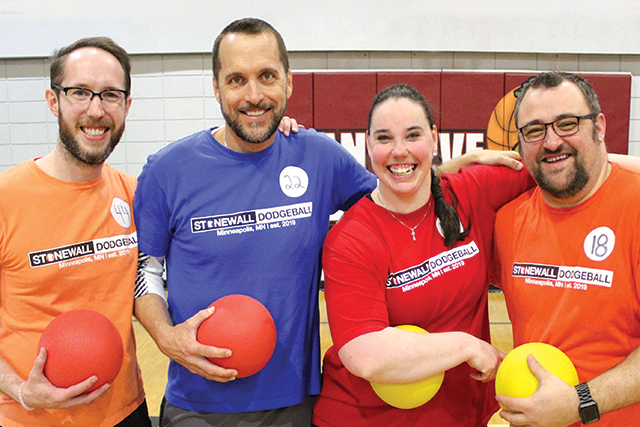 If you’re looking for sports, supportive friends, and social events, look no further than Stonewall Sports – Minneapolis, a Twin Cities based LGBTQ+ sports league. The league, which provides a supportive, diverse community of LGBTQ+ friends, neighbors, and allies, is committed to social equity and the greater good—and, of course, creating a fun, inclusive environment for recreational sports and social activities. 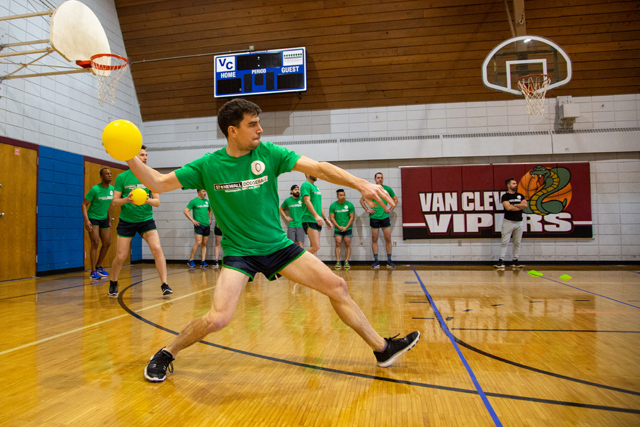 “Stonewall Sports values each player for who they are and what they bring to our community,” says Chris Arnst, communications & marketing director of Stonewall Sports. “We strive to develop a well-connected and diverse community through organized competition, social events, and fundraisers to help serve those in need.”

Arnst says Stonewall Sports encourages anyone who believes in their vision and mission to join, regardless of age, race, size, ability, gender identity, or gender expression.

“You are welcome. We have offerings at various levels of physical activity, so whether you’re looking to really get your blood racing through dodge ball, have a casual game of bocce, or cheer on your favorite team on the sidelines, we have an activity for that,” he says.

The national Stonewall Sports league was founded by Martin Espinoza in fall 2010 as a kickball league in Washington, D.C. Martin’s vision was to create an LGBTQ+ kickball league that could turn strangers into friends and raise funds for local causes. Today, Stonewall Sports operates in 20 cities nationwide and continues to expand more and more, both in mission and in size. 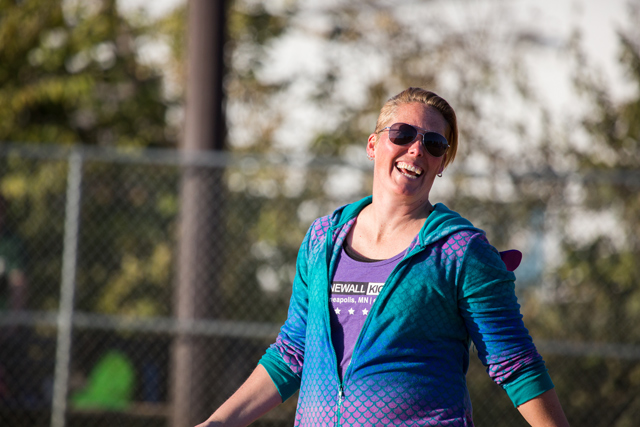 “After moving to the Twin Cities, I was in desperate need of community,” Crosson says, “I knew very few people, and I missed my D.C. kickball team, so I made it my mission to build that community in my new home. Little did I know that there were hundreds of other LGBTQ+ people in the same boat. We were all looking for a fun and safe way to meet people and make new friends.”

In October 2019, Mounds View teacher and tennis coach Scott Sundstrom brought tennis into the Stonewall Sports – Minneapolis family. His goal in creating Stonewall Tennis was to bring in players from multiple backgrounds by providing a fun and inclusive environment.

“We successfully applied for a USTA (United States Tennis Association) community grant to help get us started. Our tennis league was recognized in November 2019 at the USTA Northern Annual Meeting for helping grow the game,” Sundstrom says.

Sundstrom, who is now the commissioner of Stonewall Tennis, is passionate about both growing the game and providing a positive experience for everyone who plays, Arnst says. “He hopes to grow the league into multiple seasons with multiple play-days and getting all people, regardless of their ability, onto the court.” 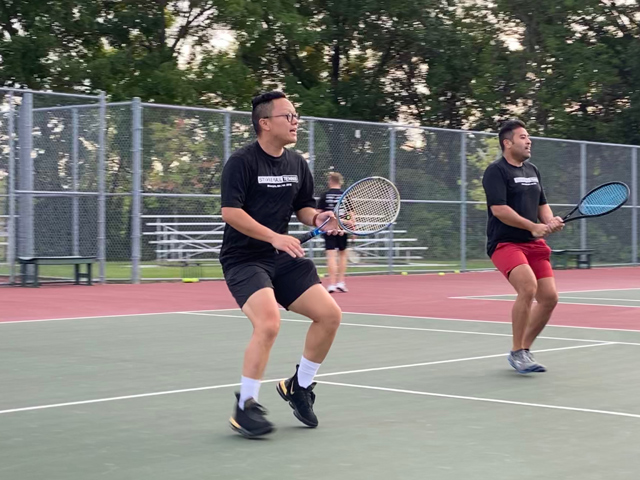 “Whether you’re a professional or picking up a racket for the first time, Stonewall Tennis is a place where you can just have fun and play with some new people,” Sundstrom says.

“Bocce is our most recent addition. Started in October 2020, Joel Dumonsau, commissioner of Stonewall Bocce, wanted to start the activity since he first saw bocce at the Stonewall Sports national tournament,” Arnst says.

Bocce as a game is accessible to more people than some of their other sports, Arnst says. “It’s a great addition that helps us build new relationships and brings in fun social elements while leaving intense competition aside. We’re excited about this opportunity for new and existing players to build this community in a way that’s welcoming for everyone.” 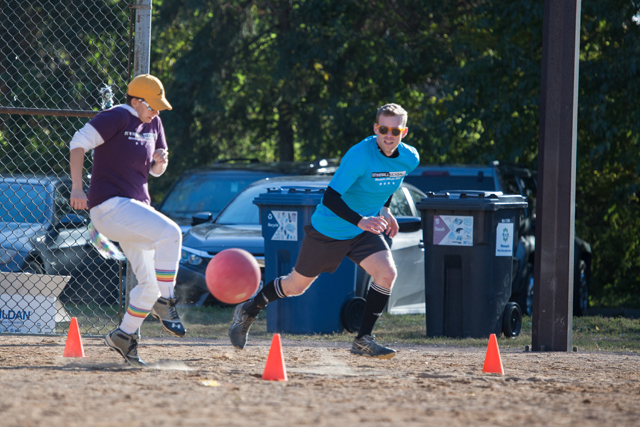 As membership has grown, Stonewall Sports – Minneapolis has broadened its community involvement. “We regularly give to underserved communities, and put out direct calls to action with our members when a specific group of people needs our immediate support. We’ve raised thousands of dollars for causes ranging from youth homelessness to housing for people living with HIV/AIDS to ALS research. Our most popular fundraiser is our end-of-season drag competition where teams put up their best players to compete for the Mx. Stonewall drag pageant crown,” Arnst says.

Following the murder of George Floyd by Minneapolis police in May 2020, Arnst says the Stonewall Sports – Minneapolis team asked their members to stand behind social justice efforts in any way that they could—sharing their voices, showing up, volunteering, donating, and helping to reinforce the fundamental value that our lives and the lives of our neighbors matter.

“The Black Lives Matter and queer liberation movements are so intrinsically linked that there is no wonder people of color, LGBTQ+ people, and other historically oppressed groups felt triggered by Floyd’s killing. It was an attack on all of us, and we all came together to speak out and demand justice,” Arnst says.

Though the COVID-19 pandemic has forced Stonewall Sports to cancel several competitions and events this year, Arnst says they’ve still been able to have virtual fitness and virtual trivia events for members. 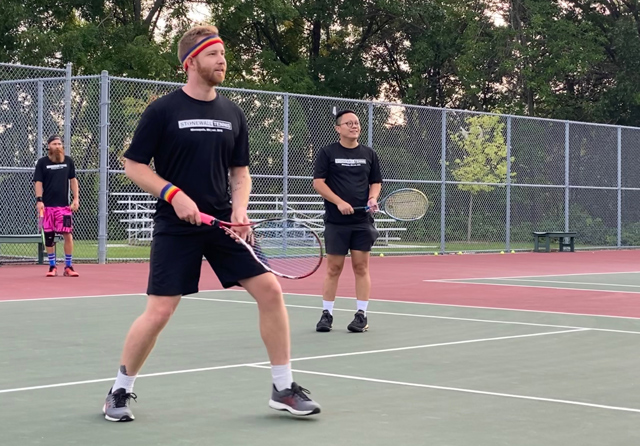 “Our top priorities are the safety, well-being, and camaraderie of our players and friends. No doubt about it, we love playing sports and bringing our community together,” Arnst says. “It’s disappointing when we have to unwind well-laid plans and cancel something just as our excitement is building. However, the impact and threat of this virus is real, and it would not have been responsible for us to continue some seasons as planned.”

Regardless of the pandemic, Arnst says Stonewall Sports – Minneapolis has big plans for the future.

“Over the next few years, we plan to use our power to advance social equity and the greater good by activating our membership to give their time, money, and attention to causes important to them,” he says.