Sports: “Playing For The Other Team, Volume II”

“Follow your blocks!  You have to follow her and read her backside!  Make the correct cut!”  In a small gym at the Minneapolis American Indian Center, Coach Heather Baker tosses a football to the next woman in line.  “All right, you’re up.  Let’s go!”  Lisa Bastien cradles the ball tightly under her right arm and takes off.

Wait, back up… what?  Women?  Are they playing football?  Indeed they are, and have been for quite awhile.  You can, too, ladies.  I did.

Women’s tackle football has quietly been around for well over fifteen years.  Since I’ve made it my mission to shed light on worthwhile teams to play for in the Lavender community, there was no better place for me to begin than with the team from which I recently retired, the Minnesota Machine.

Why retired, you ask?  Well, it may have something to do with a certain fiancé informing me that if I played throughout wedding planning, there might not be a wedding to plan.  Or not, I don’t know.

Anyway, four years ago, a recent Minneapolis transplant, I discovered the Machine, and being a football fanatic, joined, in the hopes it would give me a chance to meet people – or girls.  Sure enough, there were other lesbians, because, um… football, but there was also camaraderie, and beer buddies, and a chance to compete in a sport I’d been denied my entire life.

I should point out that this league is not the LFL, or Lingerie Football League, ahem, now Legends Football League (not fooling anybody), though interestingly enough there are four former LFL players on the Machine roster, including Bastien.

Bastien previously played with the Machine, though having the body for the LFL, gave the MN Valkyrie two seasons, until luring three other players back to “real” football along with her.

At Monday’s Machine practice, I hand over my football pads to Alicia Marchioni, one of the former lingerie league players.  These special issue women’s pads are designed to specifically protect the areas the LFL was interested in “highlighting.”  This, with other reasons, is why Bastien, who’ll be playing running back, says she wouldn’t return to her former team.

“I wouldn’t play for the LFL again due to the lack of safety for the players and lack of respect for the women by the league commissioner and his staff.”

In a separate corner of the gym, Coach Sarah Bishop leads a group through a drill, where two women at a time are facing off against one another.

A couple bodies hit the ground, and there’s applause, and encouragement.  Coaches Bishop and Baker, along with Coach Samantha Belcourt are all former women’s football players themselves and former teammates of mine, who have transitioned into coaching.  The team being coached by women is a first.

After practice, I take a minute and ask Coach Baker about her experience as a coach in the league she’s been a part of practically since its inception.  As a player, she played 10 seasons of football, in three different leagues, and for two different teams.  She also had the honor of being selected for the WFA (Women’s Football Alliance – a 64 team national league) All-American team as an Offensive Line(wo)man.  Twice.

“We were able to re-invent the way football was coached to us women. We as coaches know women are capable of more than football schemes designed for grade school boys.”

Being coached by women who’ve played seems to be much appreciated and respected by the players.  As Kelly Gillispie says, “The coaching style is what I’m really excited about and believe the team is really thriving from.  Practices are very structured, focused – get in and work hard till the whistle blows.  They expect you to learn your assignment and we still have fun doing it.  Having coaches who’ve played in this league and can relate as you continue to learn, in my opinion is a HUGE asset.”

But, should women really be playing football?  It’s a “guy’s sport” – isn’t it a threat to femininity?  That isn’t how the players see it.  Alicia Marchioni opines, “Many NFL players have taken ballet to improve their grace, fluidity and footwork on the field.  No one questions the masculinity of these men.  My playing football makes me no less feminine.”  The sentiment is echoed by numerous others.

Indeed, women of all types, professions and ages are playing football.  The Machine roster currently has players from ages 19-40, LGBT and not, made up of realtors, policewomen, hairdressers, business owners, project managers, students and moms, among others.  They’ve just begun their practices and are gearing up for games beginning in April.  Find them on Facebook if you’re interested in a new and life-changing experience.  The one thing they all have in common?  A desire to better themselves and compete at a high level.

Coach Baker is determined.  “I am very impressed by the athleticism of the women this year. I don’t remember a more physically gifted group of football players in all my years playing or coaching.  We want to win. And we do that by raising the bar for the expectations – we want these women to be aggressive, knowledgeable, and well-rounded football players.”

Leaving practice, I can’t resist.  I ask Lisa Bastien the all-important question.  “So, what underwear are you wearing this season?”  My fiancé shoots me a faux dirty look.  Bastien laughs and replies, “I don’t wear underwear.  I’m wearing compression shorts with built-in football pads for protection.”

This is not a gimmick.  These women are athletes first, and last, and they’re ready to prove it. 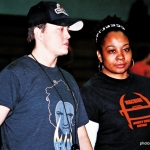 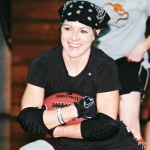 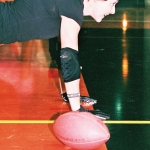 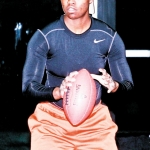 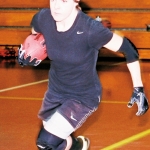 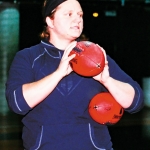