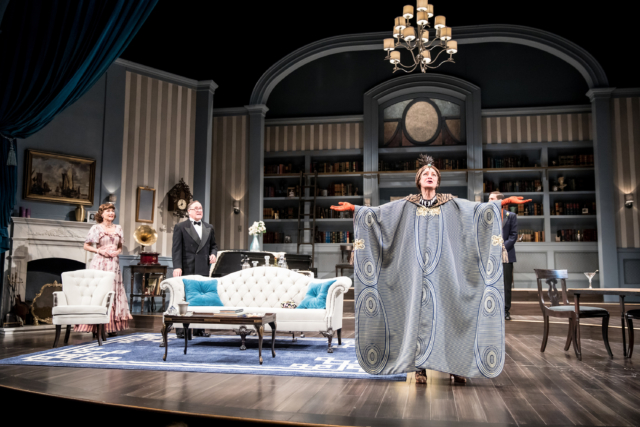 Gay master playwright Noel Coward is often regarded, and rightly so, as the aesthetic descendant of Oscar Wilde. Born in 1899, one year before Wilde’s death, Coward would go on to create his own irreverent comedic style – rich in camp, bon mots, and flickering wit. However, unlike Wilde, he didn’t skewer the middle class with brazen recklessness; he played his cards close to the vest by subverting certain mores of the wealthy. His plays cleverly unsettle people’s assumption about monogamy and desire, as well as viewing the occult with an attitude of playful innocence, not as something as necessarily evil.

Unlike Wilde, Coward appreciates that so-called “privilege” actually gives you a certain amount of scope to investigate taboos. And investigation of such things can sometimes be to the general good, as well as to what are known as progressive values – lifting the veil or opening the curtain in a nonthreatening way.

His homosexuality was an open secret and he had a genius for balancing his madcap personality with respect for tradition. Heterosexual Ian Fleming, the author of the James Bond 007 thrillers, was a friend. Coward wrote, produced and co-directed with filmmaking giant, David Lean, the nationalistic anti-Nazi classic, In Which We Serve. Adolf Hitler had him placed on his black list of British citizens who were to be imprisoned had Germany succeeded in conquering England. Coward’s own home was bombed. In later years, Coward went on to openly criticize what he saw as the UK’s excessive over-taxation – a sign of his moderate political conservatism.

It was during the Nazi assault on his home country of Great Britain that Coward’s marvelous mystical comedy, Blithe Spirit, became the most successful West End stage comedy of the time. London was continuously under the threat of German bombs raining down during that period known as “The Blitz.” Nonetheless, the Blithe Spirit actors carried joyously on.

The comedy has been regarded by some as fluff, but one must acknowledge the vibrant power of entertainment that lifted spirits in the face of violent evil that encroached the UK at the time. The play itself is coherently well-structured in the face of its own inherent fantastical themes.

At the Guthrie Theater, Blithe Spirit is receiving an impeccably acted revival, directed by David Ivers. It involves a seance that manifests Elvira (Elia Monte-Brown), the dead wife of the well-to-do Charles Condimine (Quinn Mattfeld). Understandably, this doesn’t sit well with Ruth (Heidi Armbruster), his jealous second—and living—wife. It makes for perhaps the the most outlandish love triangle in theater history. Coward called his play “an improbable farce.”

Mattfeld delivers an absolutely exquisite performance and establishes himself as a top-tier classical stage actor. He emanates sophistication, renders elegantly crisp timing, and sets the tone for Ivers’s perfectly Coward-esque ensemble. Brown and Armbruster delightfully crackle with flourishing wit and venomous sparks in their roles. Sally Wingert reels in laughs as the eccentric clairvoyant, Madame Arcati. Amy Warner and Bob Davis endear as a naive older socialite couple. Suzanne Warmanen brings befuddled rustic charm to the maid of the manor.

In summation, this Guthrie revival is a loving tribute to the vibrant Coward aesthetic.