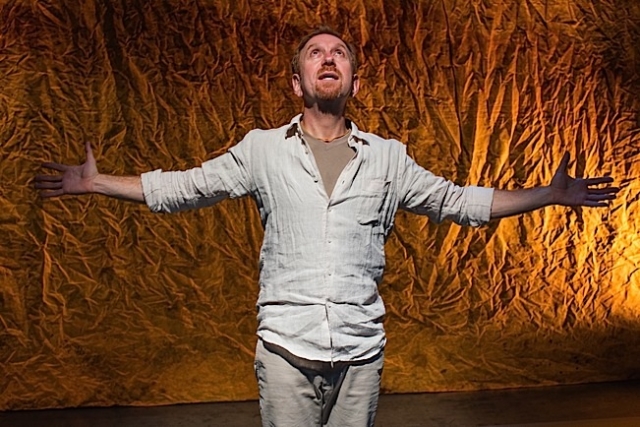 Aaron Davidman’s highly acclaimed solo drama, Wrestling Jerusalem, has made its way to the Twin Cities as part of the Guthrie Theater’s Singular Voices/Plural Perspectives series. This captivating piece is drawn from Davidman’s experiences and observations in Israel and Palestine. It is an earnest attempt to give equal time to both sides.

The opening is like a verbal machine gun through which the performer rattles off a litany of sound bites as to who is to blame for what went wrong in Palestine and Israel and who is at fault. These impassioned and hotly provocative comments relate ancient historical reasons as well as all kinds of modern historical reasons spouted from both sides.

It becomes clear that Davidman, who is a Jew, has deep empathy for the Palestinians, which is not something widely expressed in the mainstream media — that of Jews who express empathy and sympathy toward Palestine. He brings to light the far greater number of deaths of Palestinian, children especially, than Israeli deaths in recent years; the overwhelming control by Israel of the water supply for Palestinian households and businesses; and intimidating checkpoints Palestinians are subjected to by Israel.

This is not done, however, as a laundry list or political rant. Davidman does so artfully by transforming into several different characters based largely on his first-hand observations in the region. This strikes a universal chord as he points out how the historic view can outrank the urgency needed to heal current wounds. Both sides, in what has come to be a hallmark of identity politics, are or feel they are compelled to dwell in past wounds to the exclusion of present realities. It also resonates in a cautionary way of how those of us drenched in identity politics must beware of categorical thinking that drives us to “Us vs. Them” attitudes, which almost always defeats both practical solutions, as well as virtuous purpose. We can choose to take a lesson from Davidman on how both sides have come to engender disgust in so much of the world. 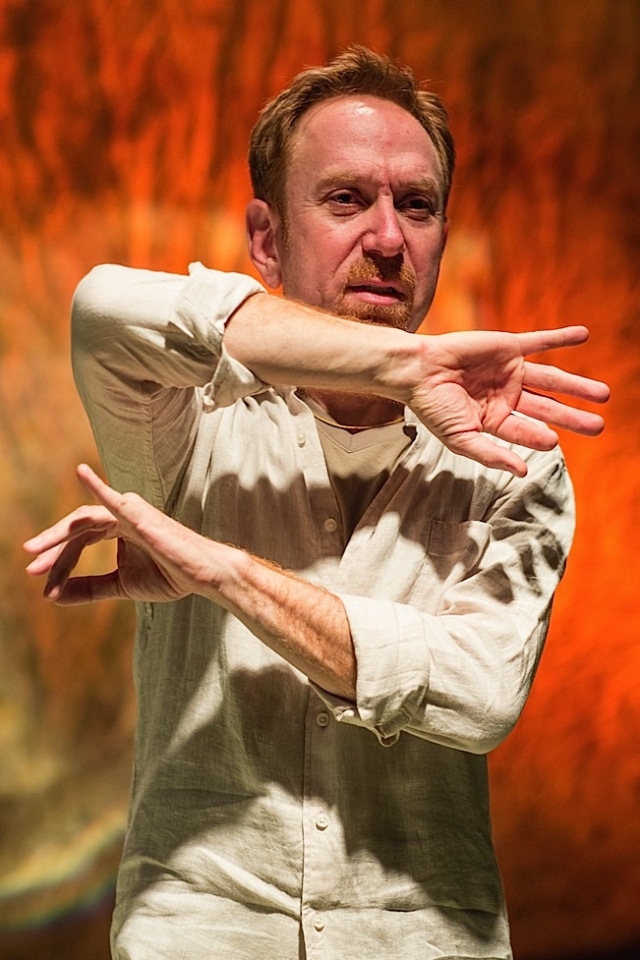 GLBT people can also see this as a cautionary story for us, especially given that we hear so many horror stories about homophobia and transphobia in Islamic cultures. And, indeed, these horror stories must be factored into the larger overview of Islam and should be reckoned with in international coalitional discussions and agreements.

But there’s also another major consideration: Davidman observes how liberal Israelis will trumpet their support of gay rights. While this is terrific, does that mean that gay men and women should give Israel a pass for its misdeeds? Moreover, as we gain rights, must we feel obligated to supporting all that our friends or what are called allies do? To what degree should the GLBT community cut slack for Muslim ideology demonizing queer folk, given that so many are monumentally propagandized against us since birth? I myself certainly have no answers for that, but I think it’s something we need to consider, at least individually.

I do have some qualms with Davidman’s piece. He doesn’t address the vast amounts of treasure and tax money the U.S. has handed over to Israel with no strings attached. Moreover, right wing American Christians tend to be zealously pro-Zionist even though, ironically they are often explicitly and implicitly anti-Semite and anti-GLBT. Furthermore, they religiously fund settlements that drive out Palestinians resulting in mass homelessness. Nor does Davidman address the tectonic influence of the Mossad on the Israeli predicament. Therefore, as spellbinding and edifying as Wrestling Jerusalem is, it feels dated in parts or like its skirting even some tougher issues than it cares to address. That said it works as an excellent primer for those who have not looked into its central concerns.