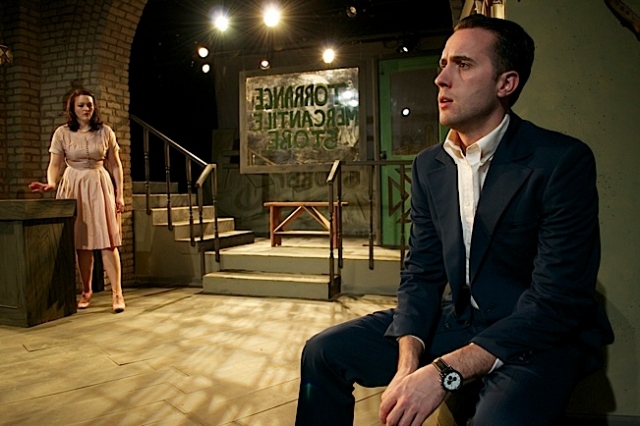 There’s something enchanted about a group of young actors performing a classic work by an iconic playwright with a profound depth of understanding. Such is the case with Six Elements Theatre’s revival of Orpheus Descending.

Tennessee Williams went through re-writes over a long period – from 1940 to 1957, when it finally opened on Broadway. The play’s narrative marches steadily toward its harrowing conclusion but along the way we experience sumptuous passages and character interactions about personal histories, the beauty of eroticism, the scourge of patriarchal economics in the American South, the cruel exclusion of not only blacks, but whites who dare to lobby for their rights, discrimination against immigrants, and how reflexively people can project both their fears and their lust onto those they stigmatize as ‘the other’. What’s more, believe it or not, Williams is not typically considered to be a ‘political playwright’ like Arthur Miller or Lillian Hellman, but he’s just as much so actually. Whereas Miller and Hellman are forthright in their socio-political stands, Williams’s socio-politics are woven into larger tapestry that resonates of myth, desire, spirituality, animality, and wit.*

Director Jenna Papke has vividly shaped the majority of her cast into two general camps that reflect what Williams is clearly driving at. The townswomen are preoccupied with petty gossip and sexual negation. The townsmen are played as grim figures steeped in a kind of Calvinistic righteousness -nothing sensual, much less, cuddly- emanates from them. Their very presence makes one pity the women compelled to live with and among them. This ensemble manifests these qualities to visceral effect throughout. At points this effect is downright startling.

The central characters are Val, a young drifter who is entering his 30s and Lady Torrance, a much younger wife of a bitter and ailing General Store owner, Jabe Torrance. Lady, who is of Italian descent, was coerced into the marriage after her father met a horrific end in which Jabe shared culpability. There’s a strong sense that people can be owned and controlled. And if you don’t play ball, you are done for.

Though Val has played guitar in honky tonks and other clubs throughout the South, he has retained a kind of innocence as played by Phillip C. Matthews. It’s a lovely performance wherein we the audience gets an idea of what’s in store for him, though the character honestly doesn’t. This makes for searing dramatic tension. 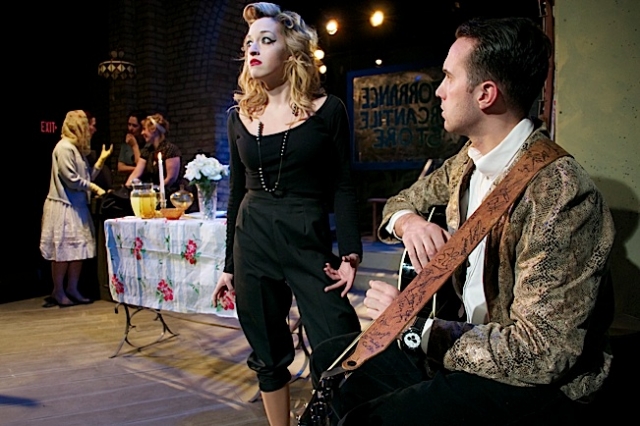 Matthews’s very natural rendition is more satisfying than Marlon Brando’s take on the character in the film version titled The Fugitive Kind because of how Matthews evokes vulnerability and lack of savvy when in the lion’s den of envious townsmen and lusting townswomen. The men intuit the women’s intense attraction to Val’s physical and inner beauty and resent him furiously for it. Tragically, Val is far from processing the full extent of what a treacherous dynamic this is. Matthews is excellent. He plays the text and connects with the actors.

Looking like a young Olivia de Havilland, Meredith Larson’s Lady Torrance is a superb portrayal that unfolds with ungodly realizations about her past and her husband that upset and therefore blind her to the macho redneck storm clouds gathering to exact their wrath. James Tucker, who appears to be the oldest actor in the show, is chilling as Lady’s husband. He’s the kind of older frustrated man of power who Williams absolutely hated and Tucker makes that felt quite intensely. He’s also deliciously funny in a dark way. Boss Finley in Williams’s Sweet Bird of Youth and Stanley’s glowing reference to Huey Long in A Streetcar Named Desire come to mind.

Another marvel in this production is Reba Clamp as Carol Cutrere, a social outcast, who comes on to Val with aching attraction. She has the play’s fabled ‘gunny sack’ speech which she delivers with lyrical use of voice and body. This beguiling performance might have distracted from the very different energy that the other actors rightfully emanate, but Clamp blends into the mystical intentions of Williams in a way that can truly be called magical. She’s a feral presence that casts a spell.

Yet another speech, the ‘lovemaking’ speech by townswoman Beulah Binnings, in the beginning, is also beautifully rendered: Heather Quigley sets the poetic tone of the production and from that we’re off to the chariot race in the sky, so to speak. The rest of the ensemble is equally spellbinding throughout: Emily Knotek, Corey DiNardo, Ethan Jensen, Melissa Iverson, Skot Rieffer, Philip D. Henry, and Danielle Krivinchuk. Scot Moore’s primal sound design, Stephanie Rosenthals 1950s Woolworth look costumes, and Henry’s simple rustic set add to the overall ambience quite fittingly.

* It’s worth seeing Woody Allen’s film, Blue Jasmine, a contemporary re-imagining of Williams’s A Streetcar Named Desire. Using that drama clearly as a springboard from which to comment on the human wreckage from recent Wall Street crimes and their fallout, we can return to the Streetcar text and sense similar concerns are afoot in both works about wealth and poverty specific to the capitalist system. (By the way both the film and the play enjoy bipartisan respect and adoration.) Allen’s superlative cast led by Cate Blanchette ingeniously reveal this.

**Marlon Brando was one of a kind and his power should never be shortchanged. He advanced the Sexual Revolution is significant ways – a courageous and innovative artist in a class by himself. However, at times, his ego got in the way and overpowered his co-actors, which was also a way of disconnecting the full psyche from the script. In The Fugitive Kind Brando is magnetic and very sympathetic, but he has moments that border on self-indulgence. He milks the audience. And as with Jack Nicholson, sometimes we the audience relish such moments, but we must consider that they don’t always serve the script. Because Matthews’s Val is sprung from a humbler, text-based approach, I think we see the play that Williams actually wrote at Open Eye. Unfortunately, the great film director Sidney Lumet was under the gun of Hollywood executives who had no interest in anything but star vehicles (Brando was paid a million for the film), therefore, many of the play’s lyrical passages are cut or shortened. This damages the overall effect of the film.

Also consider this. It’s on record by Williams himself that he absolutely adored Brando -was crazy about him. And how could you not! I certainly do. The problem is, I think, that Brando’s unprecedented mystique and Adonis-like physique cloud Williams’s deeper intentions. Granted, as David Halberstam in The Fifties points out, the trio of Brando, Williams, and director Elia Kazan were of great cultural consequence to that decade, and should be remembered favorably for that.

But as time goes on, Brando’s Stanley in A Streetcar Named Desire is far too appealing given the character’s violent personality. Some years ago, there was an Actors Equity Showcase at Minneapolis Theatre Garage in which Steve Sweere, a very well built and handsome actor, played Stanley, and he was shirtless in parts as well. But Sweere’s evocation of Stanley’s violent character rightly undercut the physical beauty -which is how it should be. No glamor whatsoever. Looking back on Brando, it’s too easy to say – oooh! what a stud! And that’s not the effect you want!

Matthews suits the role as a very attractive naive man who lacks the apprehension of the fact that all these craven male-dominated women are passionately desiring him. This lack makes him more sympathetic. So he doesn’t overpower other scenes the character shouldn’t. And an added plus is we say ‘I know a guy or guys just like him’, guys who have no idea of the passionate effect they have on others.